This report evaluates the nomination of Qatar’s new ambassador to the U.N. Human Rights Council, Hend Al-Muftah, to become Chair of the United Nations Forum on Human Rights, Democracy and the Rule of Law, “an important forum for exchange, dialogue, mutual understanding and cooperation,” according to the UN, which will be held on November 24-25, 2022.

Mutual understanding, however, appears to be the last trait one would ascribe to Ambassador Al-Muftah. Qatar’s Permanent Representative to the United Nations in Geneva has a long record of publishing racist and classically antisemitic tropes about Jews, bigoted attacks on gays, and spreading false information and conspiracy theories about Western societies and liberalism.

Ambassador Al-Muftah’s multiple posts over more than a decade stand in complete contravention to the principles and values of the UN Forum which she seeks to lead, and of the founding charter of the Human Rights Council.

In wake of the report, UN Watch has urged the UNHRC president to reject her candidacy, in a detailed letter.

Part 1 of this report documents Ambassador Al-Muftah’s hate against Jews; Part 2 exposes her hatred against gays; and Part 3 reveals her bigoted remarks against France, America, NATO and other Western societies.

Ambassador Hend Al-Muftah: ‘The Jews focused their investments in industry and the media, and that is why they dominated, tyrannized and ruled the world.” 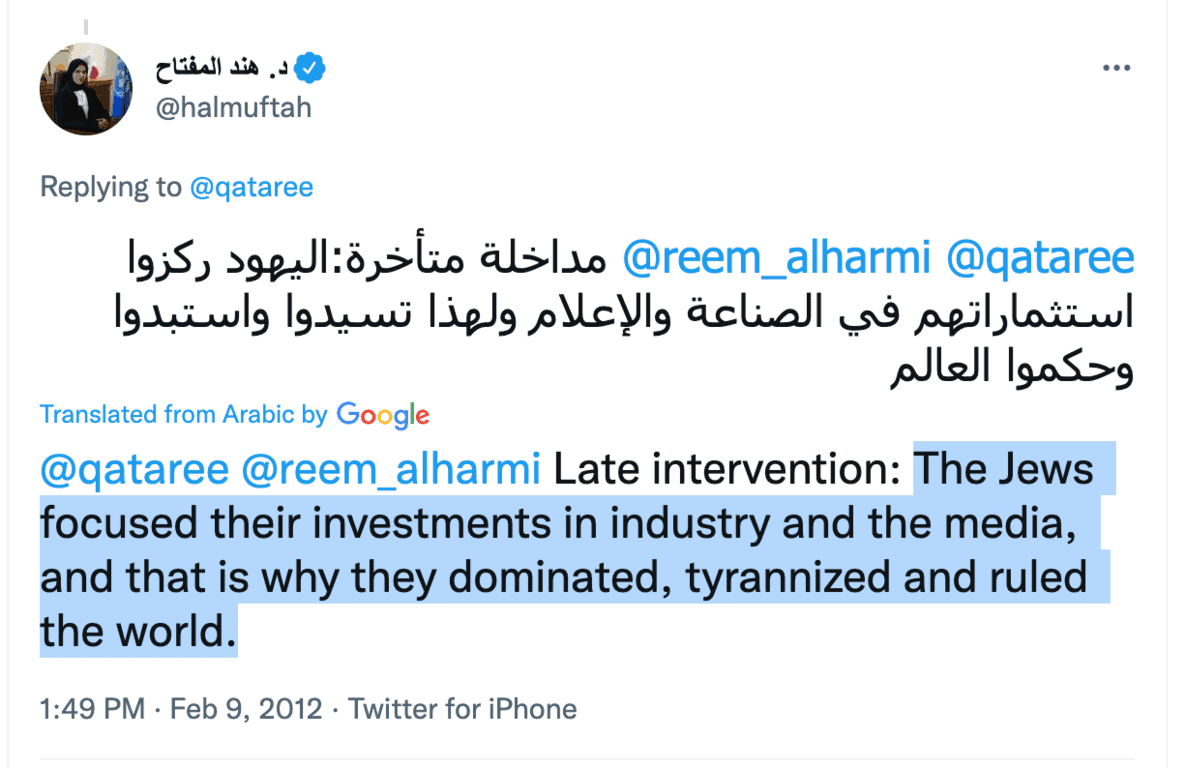 Al-Muftah: “The American zionist controls the U.S. media,” and “thus it is well-targeted for achieving their anti-Islam everywhere!”

@WBAMBMBH @aalbaker Cauze the American zionist controls the US media, thus it is well-targeted for achieving their anti-Islam everywhere!

Al-Muftah: “We learned from a young age that the Jews are our enemies!” 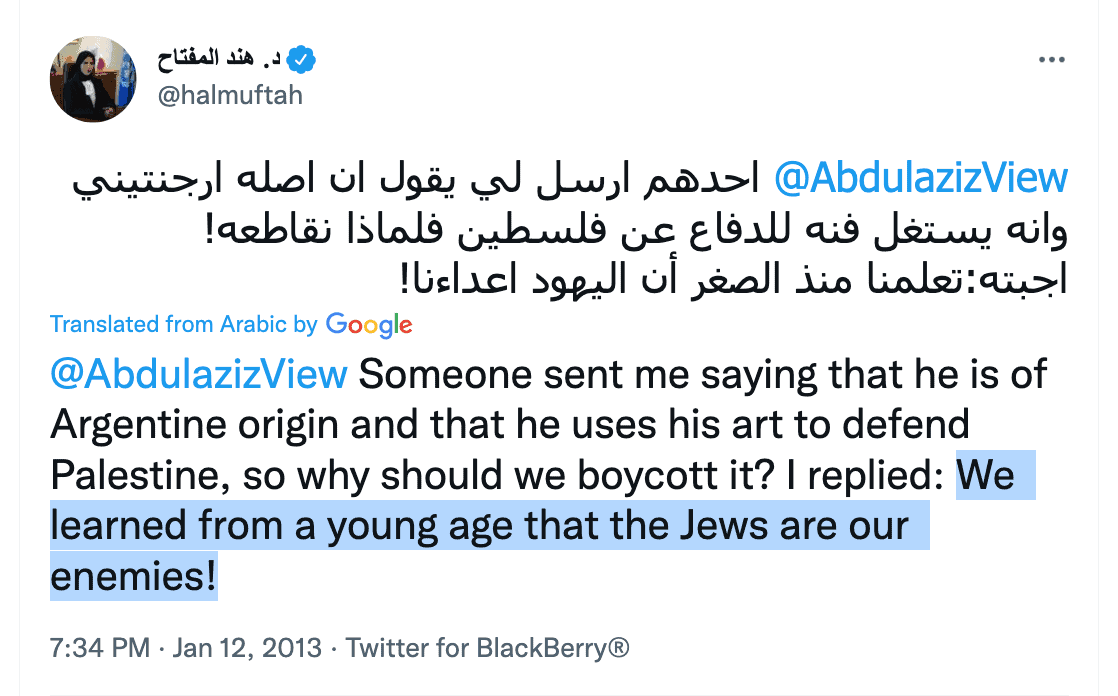 Hend al-Muftah: “I only remember our daily morning anthem from my childhood: Palestine is our country / The Jews are our enemies / And salute to the flag…” 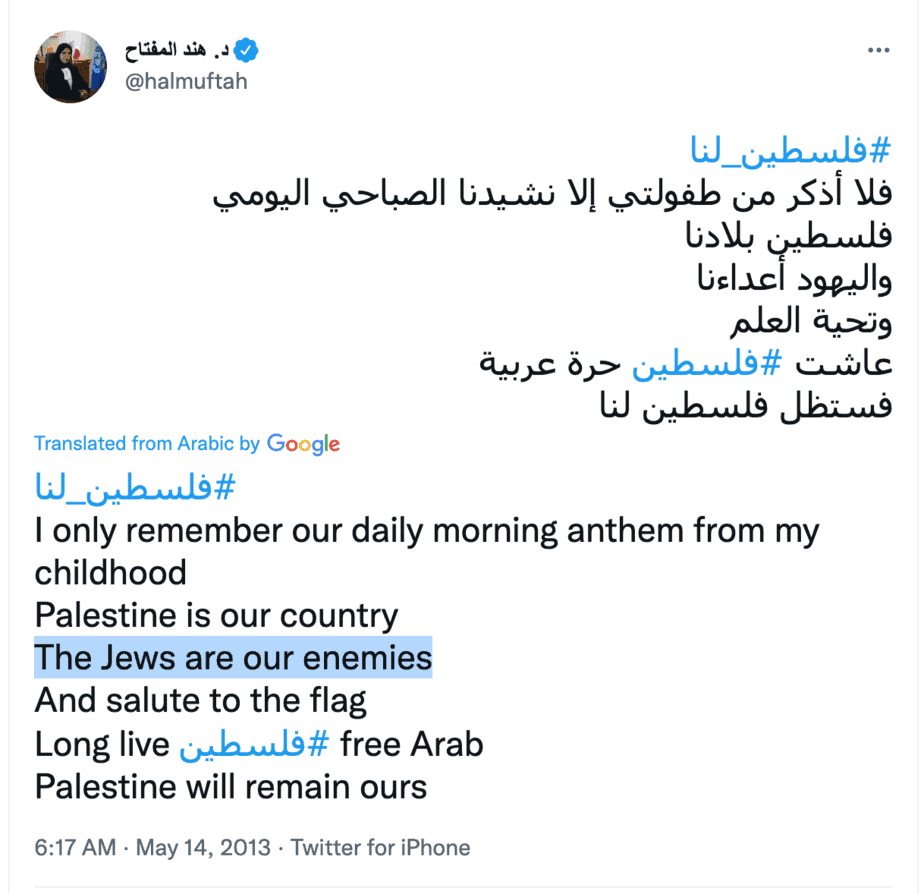 Al-Muftah calls for the “expulsion of Jews from Palestine.”  This is “not only an important issue for the Palestinians, but our cause all, including you, me and us!” 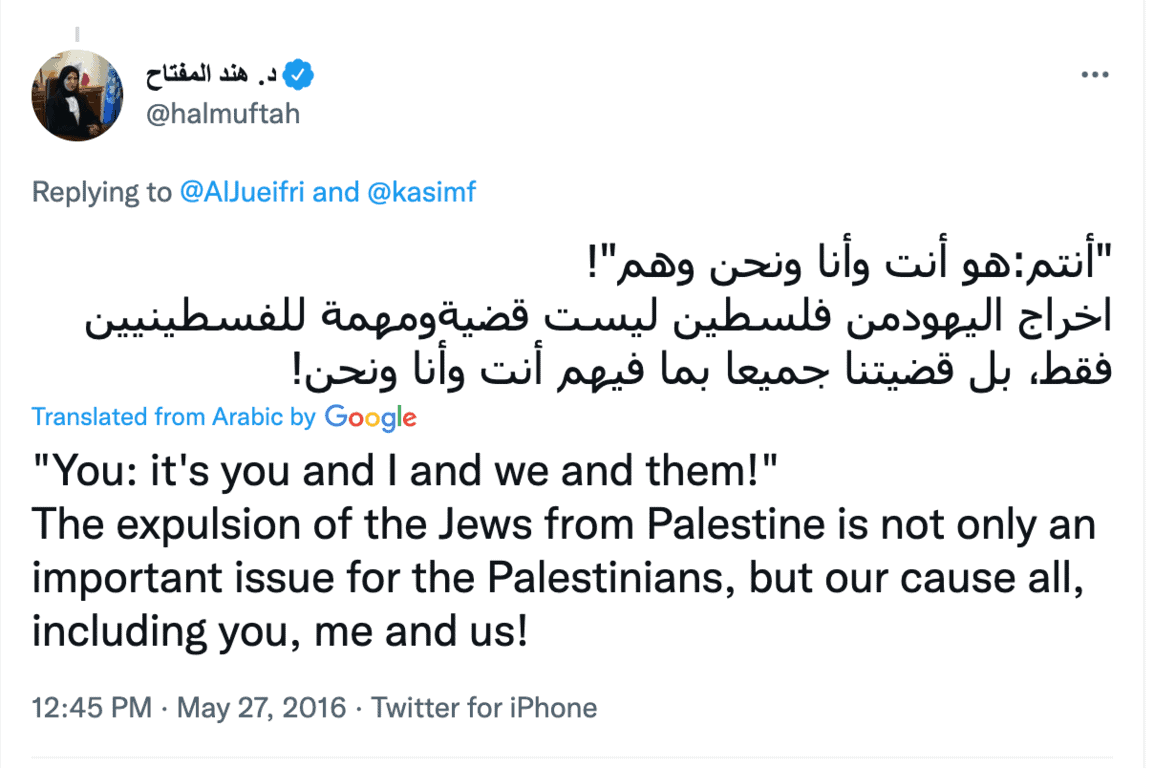 Ambassador Al-Muftah posts antisemitic video of child calling to trample the corpses of Jews, in which the latter says: “You sons of Judaism… By God, by God, by God…We will liberate Palestine, we will expel you and trample the last corpse of a cursed Zionist in Gaza with our honorable feet, God willing.”

In the Twitter thread below, Ms. Al-Muftah proposes a conspiracy theory that Israel knew about an Al Qaeda attack on the Sinai, that Israel actually created Al Qaeda and indeed “hangs over every terrorist threat,” and she agrees with a commenter that Israel “has hidden hands in every country” to carry out conspiracies. In her words, “the Zionists have actually succeeded in distracting the world from our main cause, which is Palestine and their criminal violations!”

• Al-Muftah: “Was Israel aware of the terrorist attack? The evidence is that it evacuated its citizens from Sinai 3 days  What is new in the meanness of the Zionists!”

• Al-Muftah: “Al-Qaeda… Israel hangs over every terrorist act… and after years we will read that Al-Qaeda was either made by Israel…or it was just an illusion!”

• Hussain Al Jaber:  “@halmuftah The new thing, doctor, is the Arab Spring. I believe that they have hidden hands in every country to distract the world from Palestine and what is happening in it.”

• Al-Muftah:  “I agree with you, and this is what the Zionists have actually succeeded in… distracting the world from our main cause, which is Palestine and their criminal violations!!” 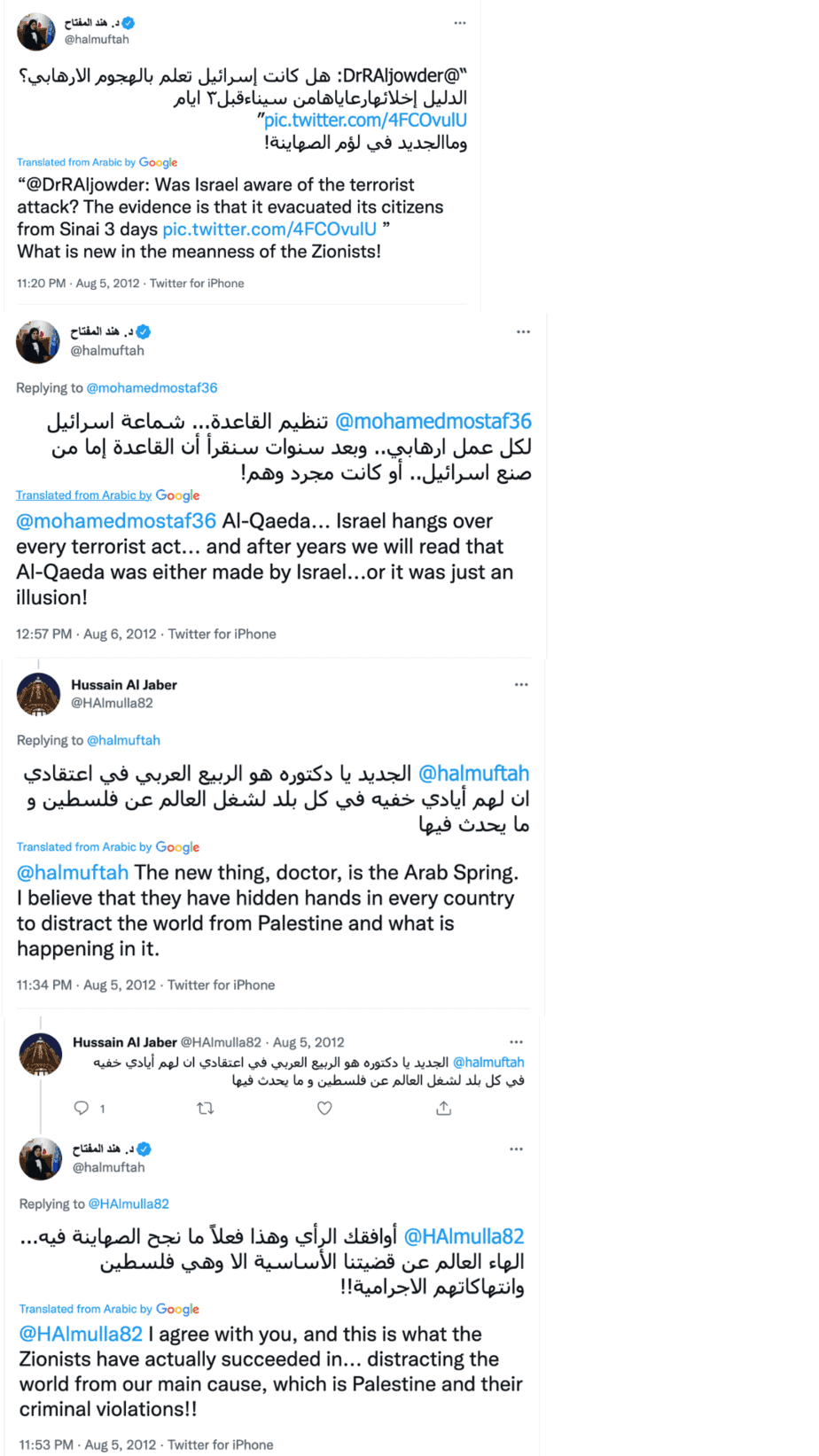 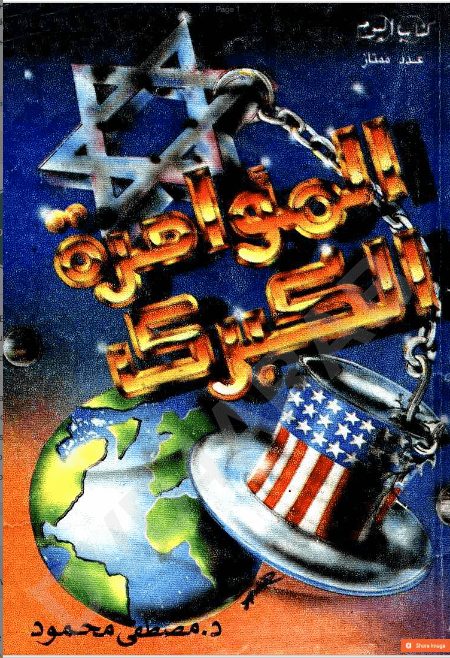 The Jews are “the termites of that civilization” that “eat it from the inside,” a tribe that has been “planning for a thousand years to destroy this world and dominate it.” This tribe is “an enemy that we must expose in all its ways,” writes Dr. Mustafa Mahmoud, an Egyptian author who elsewhere accused Jews of inventing satanic worship rituals, in an extract from his book The Great Conspiracy.

Ms. Al-muftah adds, “I advise all young people to read it! Don’t be fooled!” 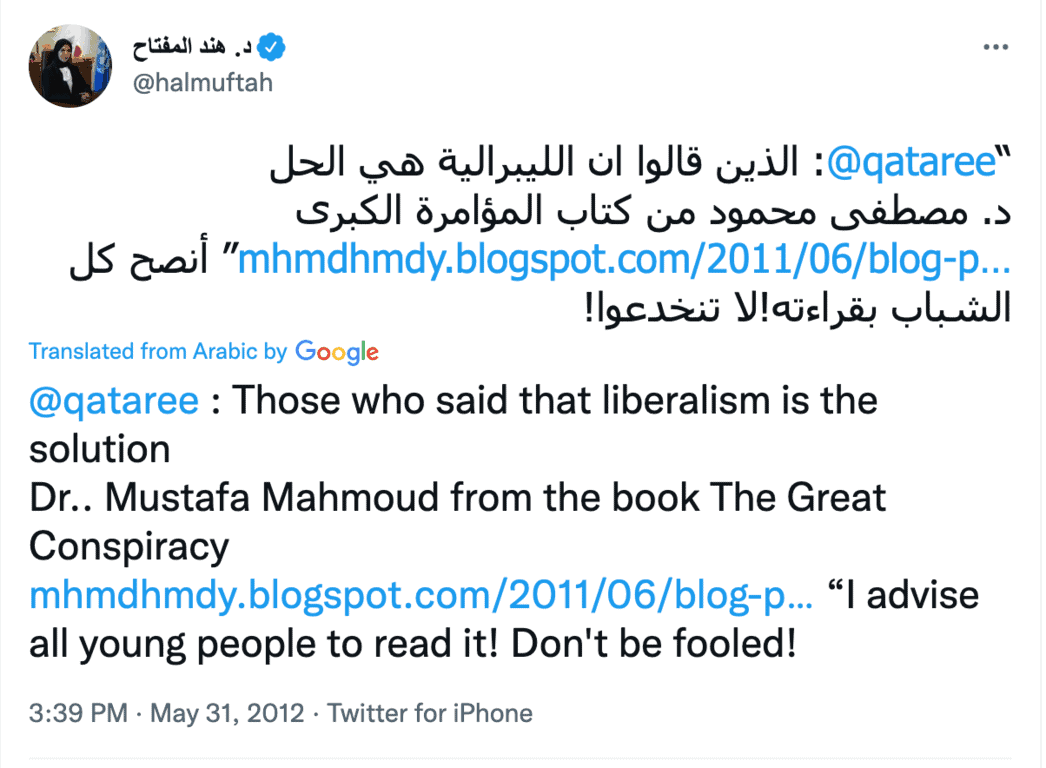 Al-Muftah:  “Oh God… turn the Zionists away from them, blind their eyes and paralyze their hands…” 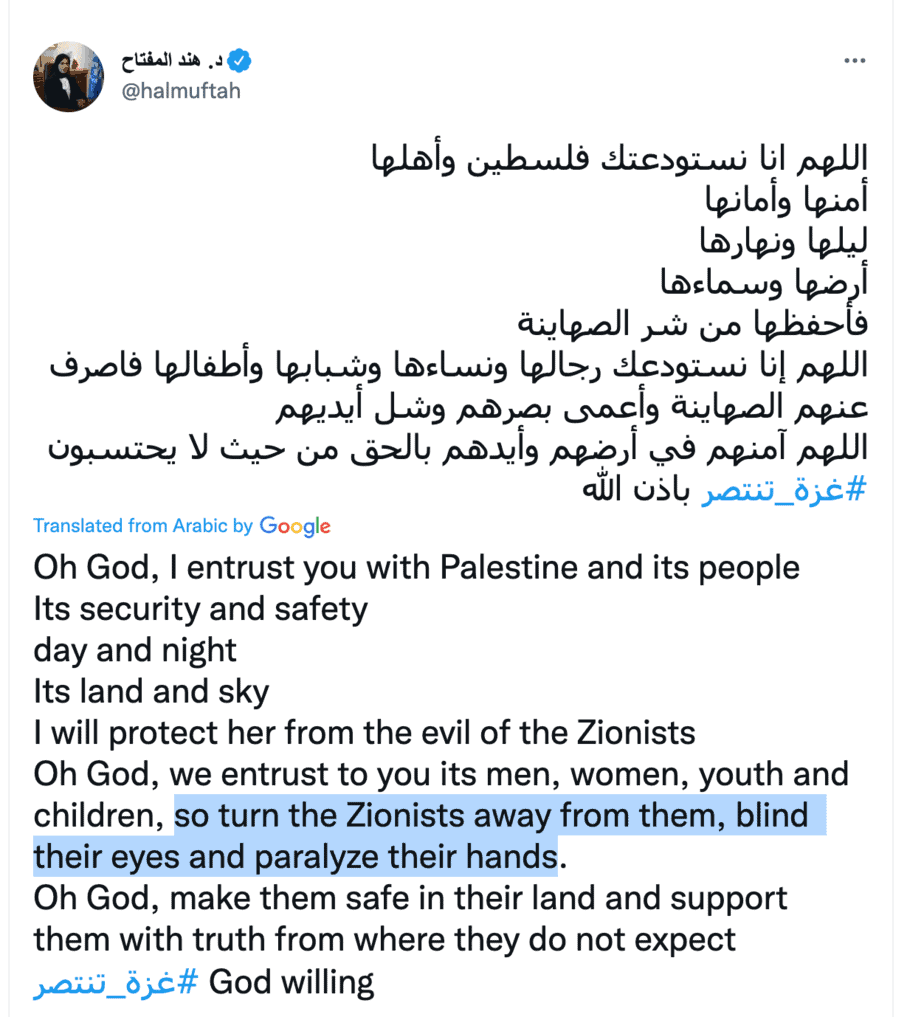 Al-Muftah tweets “BBC Correspondent says MOSSAD did 9/11” and shares a video of antisemite Alan Hart saying that Israel’s Mossad, “and the Zionists and the Neocons,” helped orchestrate the 9/11 attacks, using a “controlled ground explosion” and by guiding the planes to the twin towers by transponders, interviewed by 9/11 conspiracy theorist Kevin Barrett, the host of “9/11 Truth.”

(In 2016, in a warning or perhaps a wish, the same Alan Hart wrote that the Jews would inevitably provoke another Holocaust.  “The danger for the Jews of the world is that anti-Israelism could be transformed into anti-Semitism, leading at some point to a second holocaust, my shorthand for another great turning against the Jews…. the outrage of concerned and caring citizens around the world would speed up the transformation of anti-Israelism into anti-Semitism, making another great turning against Jews inevitable at some point.”)

Accuses Israel of “massacre” for responding to 4,000 Hamas rockets in 2014, while posting caricatures with classically antisemitic tropes about Jews controlling world leaders. In one of the images, then Israeli Prime Minister Benjamin Netanyahu, with the Star of David on his shirt, is riding and beating United Nations Secretary-General Ban Ki-moon like an animal. 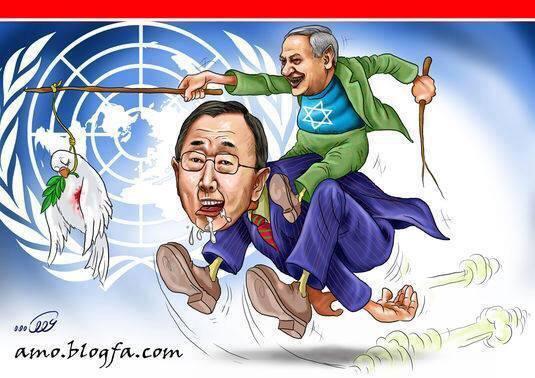 @mark_sarron Needless to mention that many Western states including US still find gay rights… Disgusting rights!

Al-Muftah calls for “God’s curse” upon gays for homosexuality, and for those who “encouraged them.” 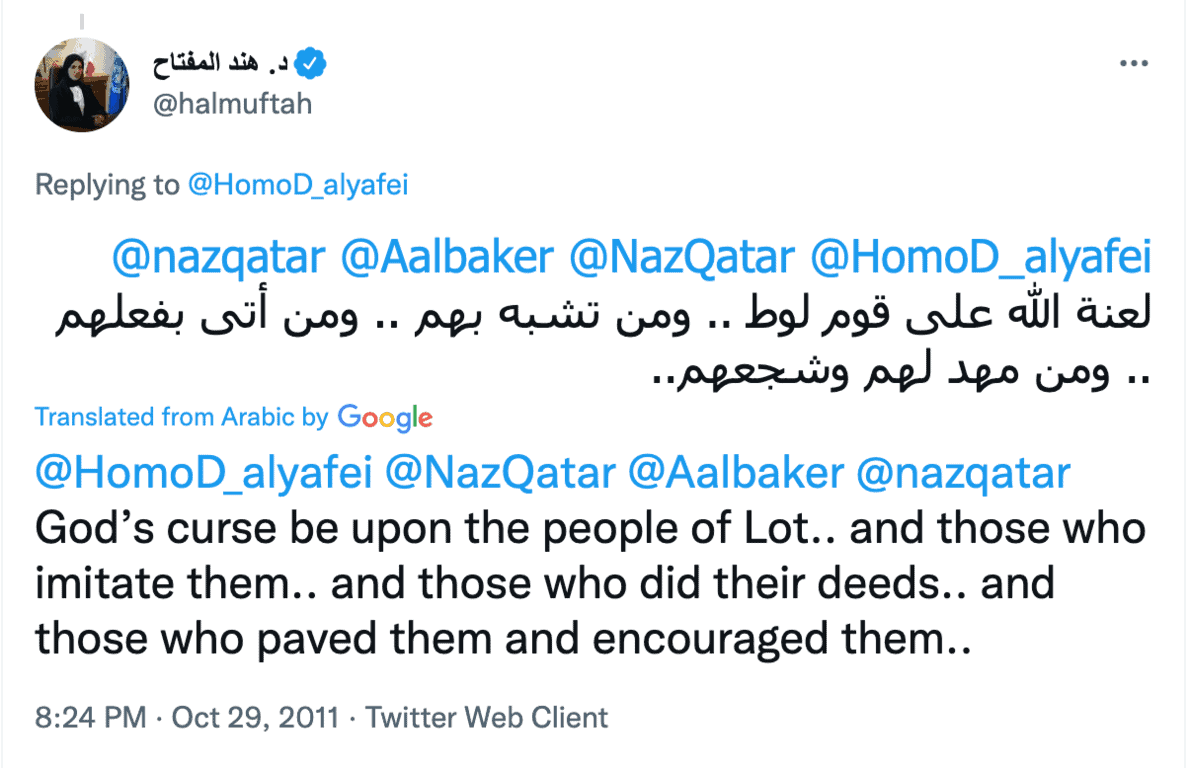 In response to a UN plea for gay rights in Africa, Ms. Al-Muftah tells the UN to “stay away from Middle East and Arab countries, keep your rights for your people.”

UN in gay rights plea 2 Africa http://t.co/kJb3DqDG
Via @BBCNewsUKfeed#UN stay away from #ME & #Arab countries,keep UR rights 4 UR people:(

Al-Muftah: “Absolutely NO! Defending human rights has nothing to do with gay rights!”

@mark_sarron Absolutely NO!Defending human rights has nothing 2do with gay rights!Qatar is Muslim &conservative country even open 2 cultures

Ambassador Al-Muftah:  Gay rights “is in conflict with the three monotheistic religions and morality,” and “also with the legal legislation in most countries,” and therefore should not be raised at the International Parliamentary Union. 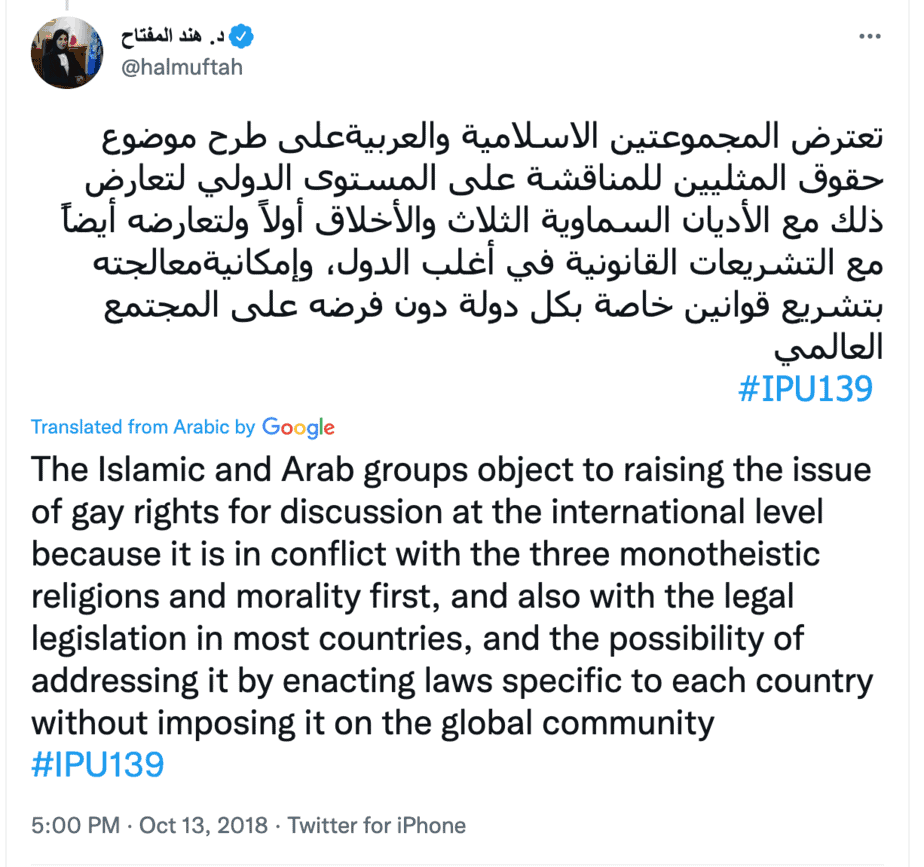 Ambassador Al-Muftah calls on God to curse Gays. Admires Russia at 2018 World Cup for opposing gays, “may God curse them!”

Al-Muftah condemns former U.S. Vice-President Dick Cheney for celebrating his daughter’s gay marriage, says “the West celebrates the lack of reason and religion” and “the decay of his morals.” 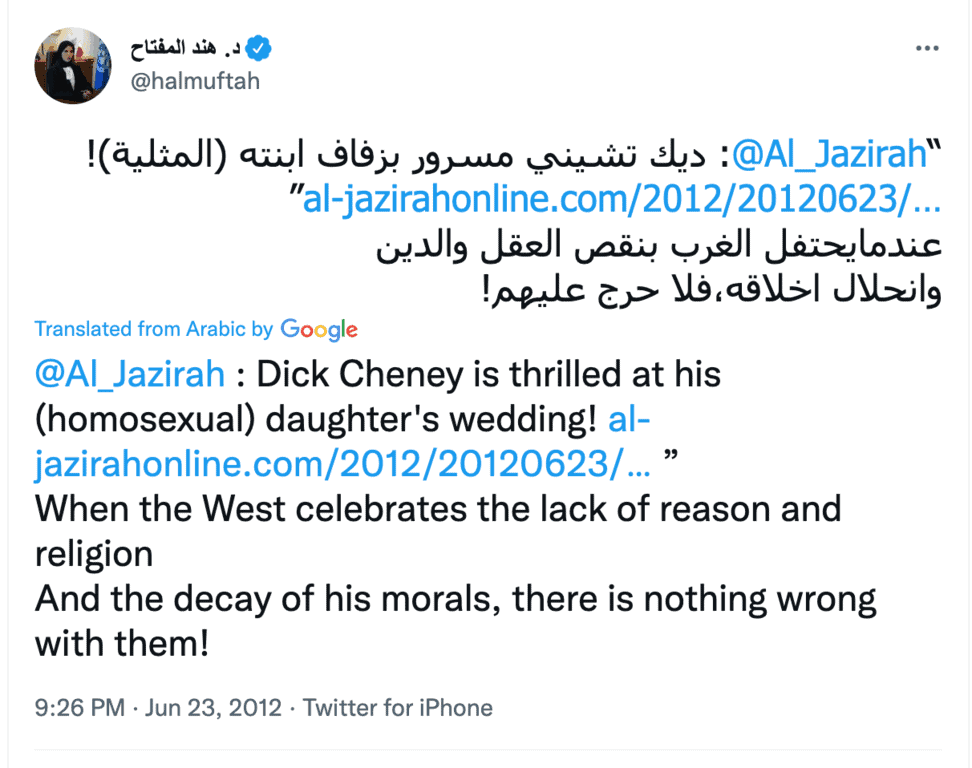 Al-Muftah: “The ideas of secularism, liberalism, atheism and homosexuality have spread and are practiced under the pretext of respecting ‘human rights’ and ‘other opinion’!” 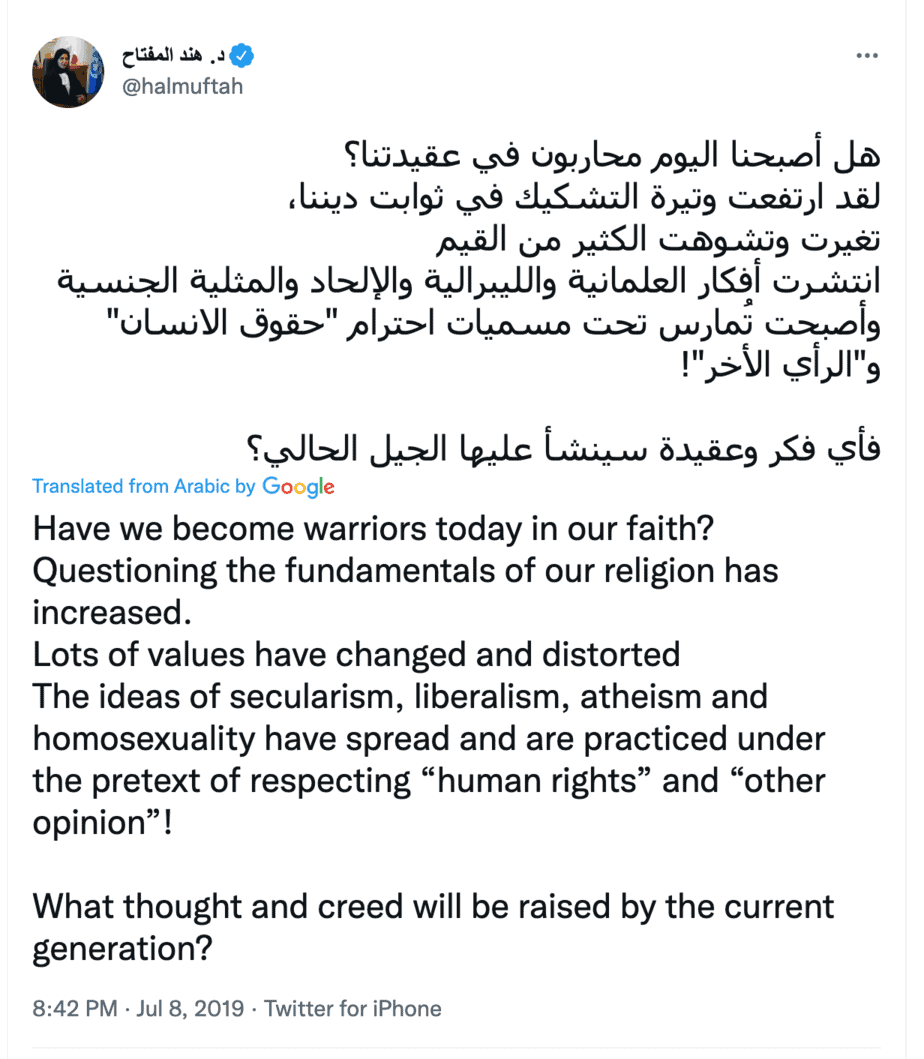 Al-Muftah quotes a report that a debate about homosexuality in Islam is beginning, and writes: “Stay away from Islam, don’t U understand???”

A debate about homosexuality in #Islam is beginning… http://t.co/XIHckx5c#Humanest & #West .. Stay away from Islam, don't U understand???

Al-Muftah:  “Fuck this cultural globalization that gave them rights they don’t deserve.” 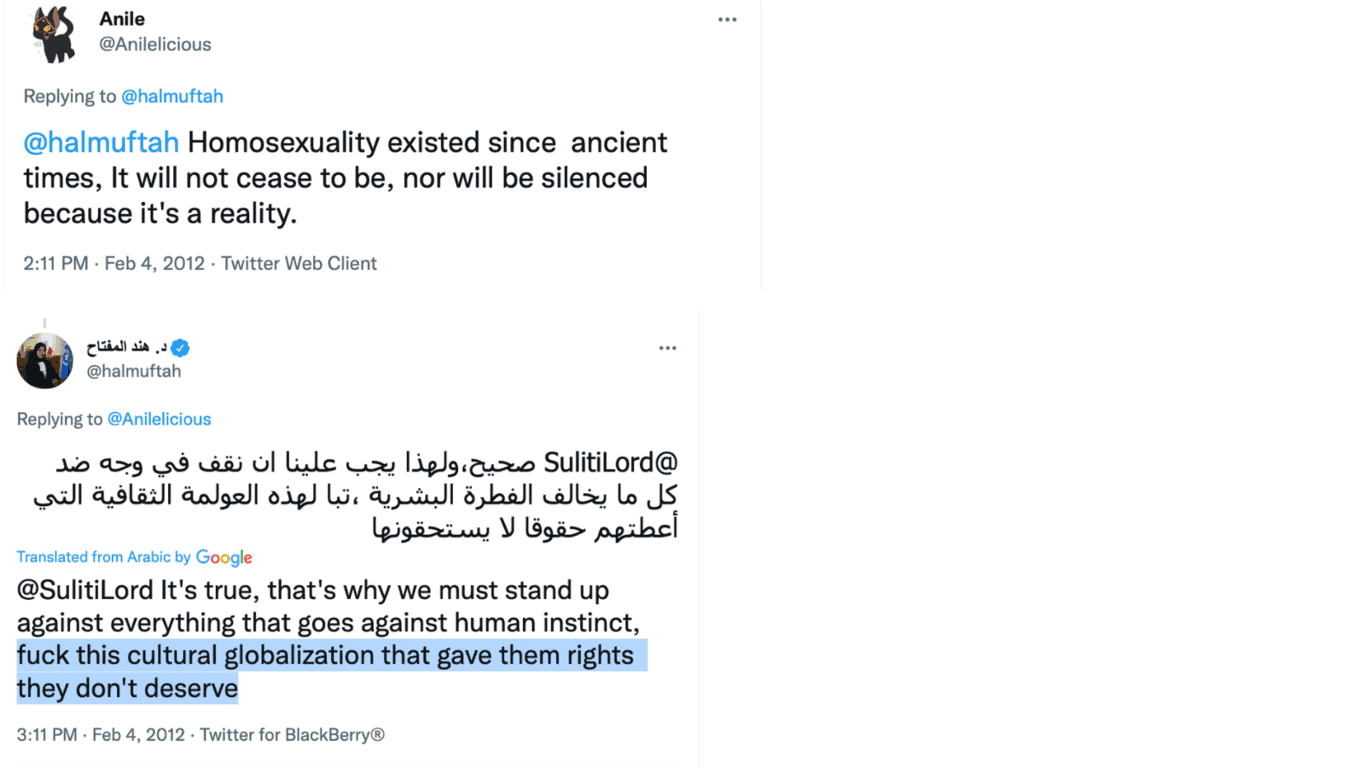 @SultanAlQassemi NATO were paid to kill Ghadafi, but #Libyan revolutionist are not paid for fighting for their #freedom :((((

Al-Muftah: “Terrorism is a term that the West has been unable to frame except within the limits of achieving their own agenda!” 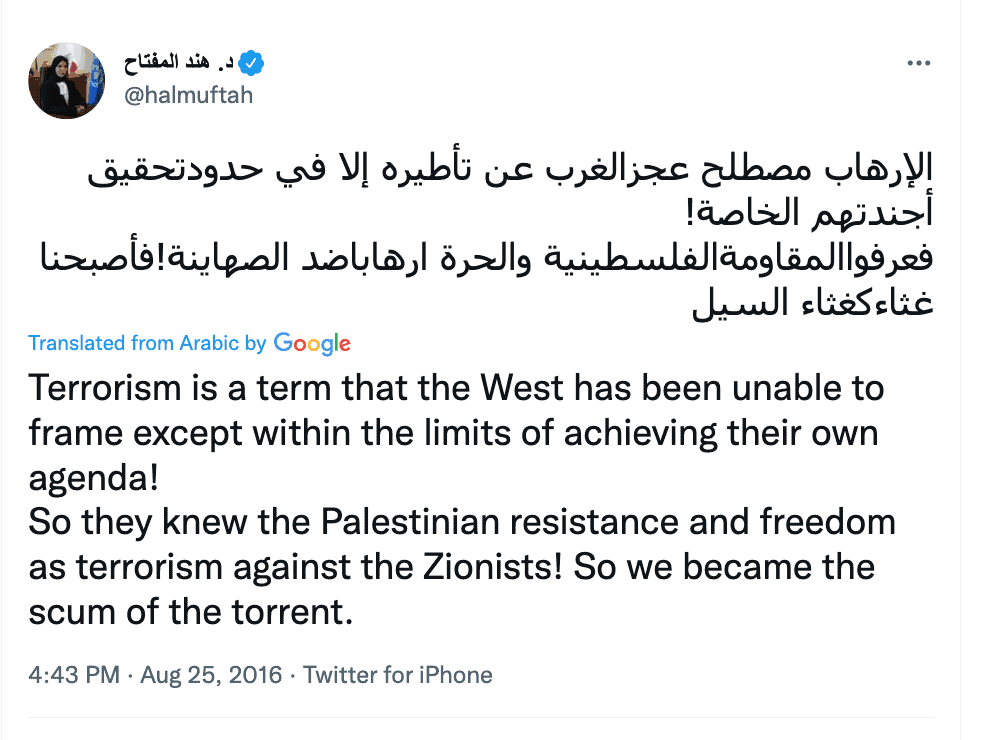 Al-Muftah: “France’s government and people are known for their racism against Muslims!” 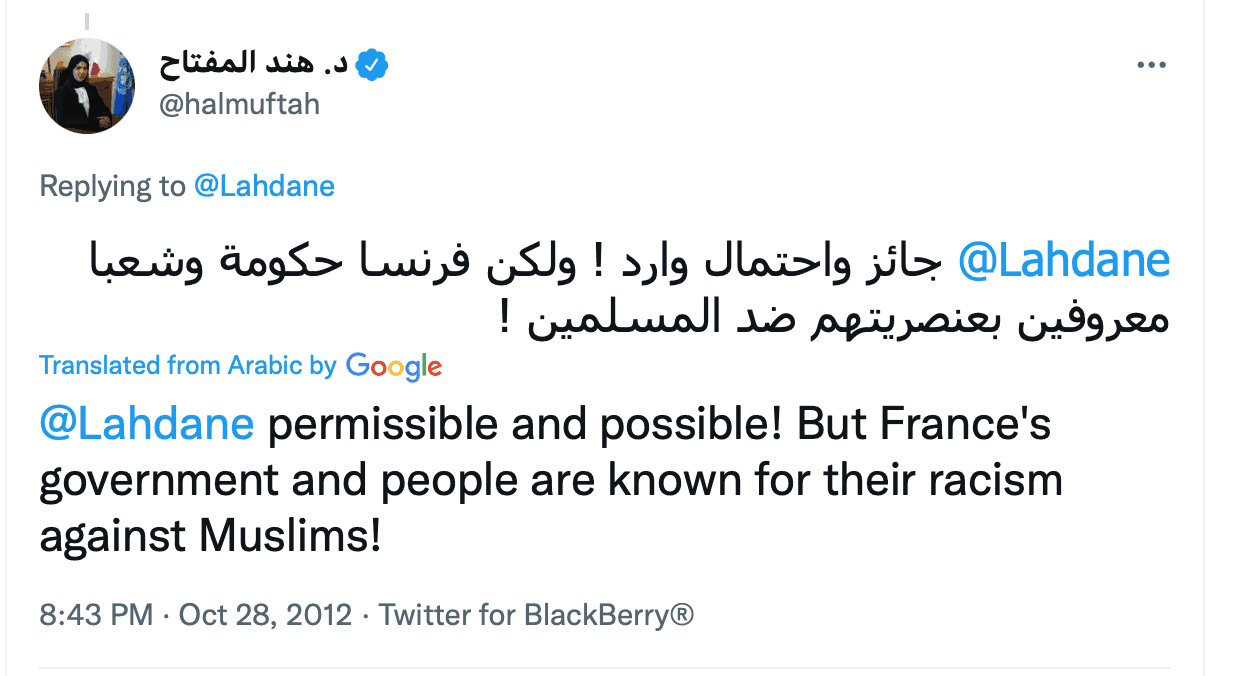 Al-Muftah: “France.. arrogant dictatorship.. in the guise of democracy…” 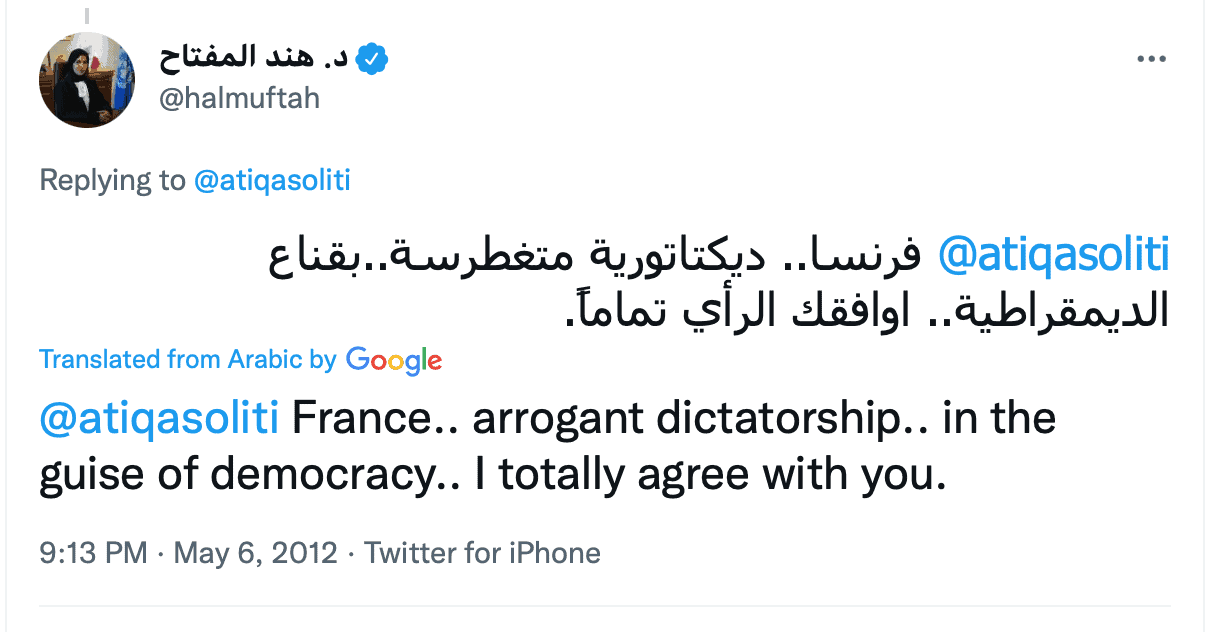 Al-Muftah: “Fuck the new crusade in #Mali / Under the leadership of the leader of freedom #France 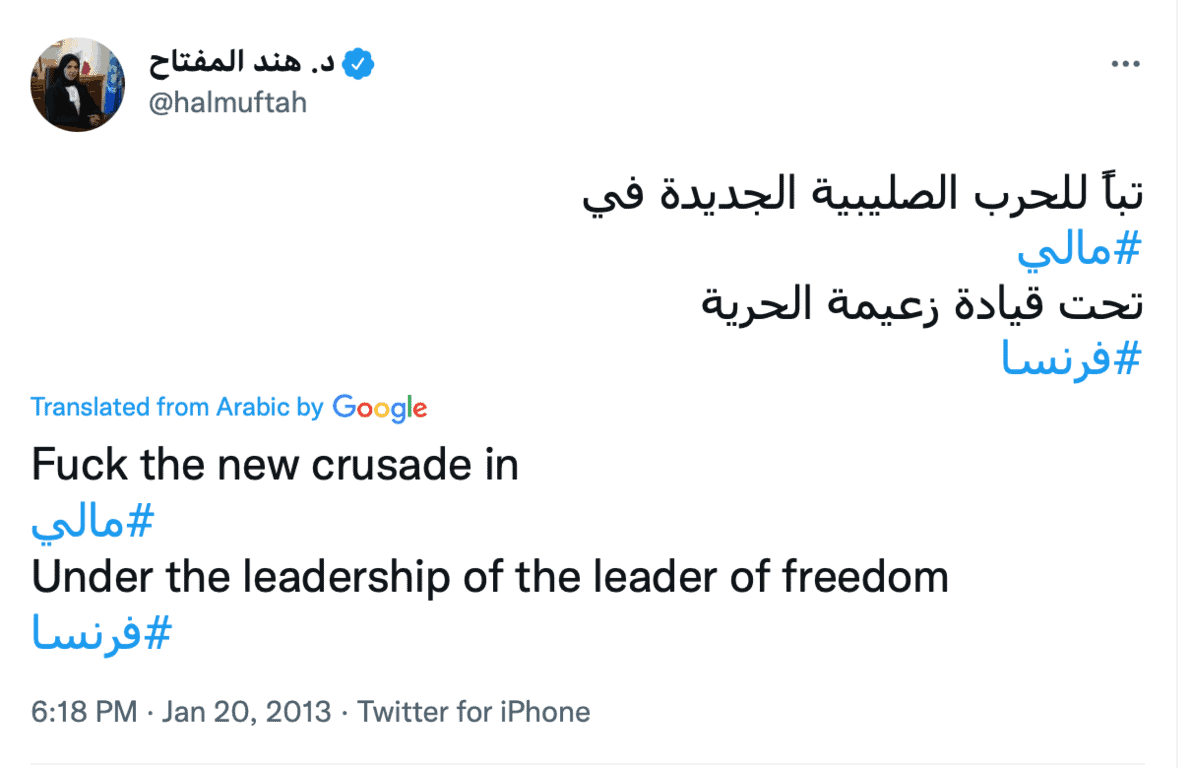 Al-Muftah: France is a country of “fake freedom” which is “killing the freedom of innocent Muslims in Mali.”

#France the country of #freedom
Is killing the freedom of innocent Muslims in #Mali
Wow!
Enjoy fake freedom
FREE WORLD !

Al-Muftah implies that President Obama was, like France in Mali, “killing innocent Muslims” in Afghanistan.

Dear Mr. #Obama#France is bombing & killing innocent Muslims in #Mali
Does that make any sense for you as it did within Afghanistan? 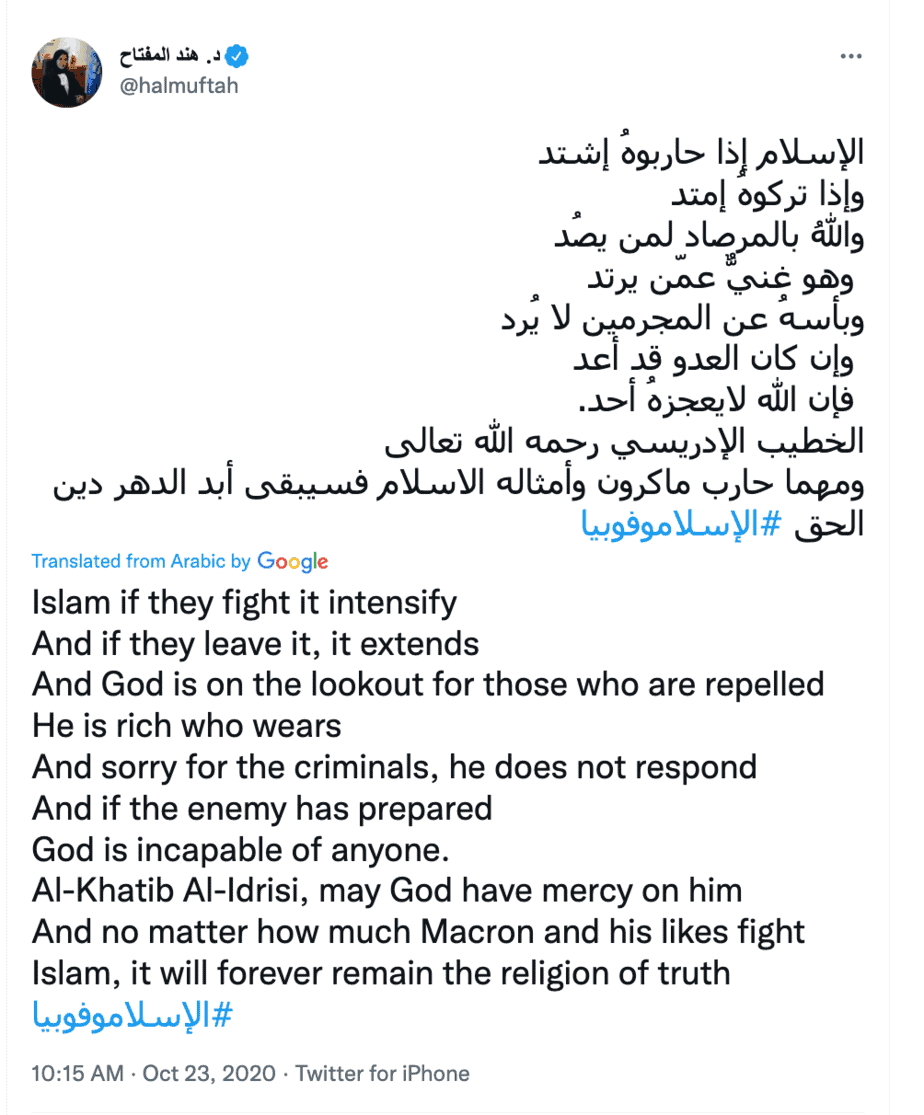 Al-Muftah says human rights are used as a pretext for the deformation and decay of morals and values, “in light of the hegemony of Western culture.” 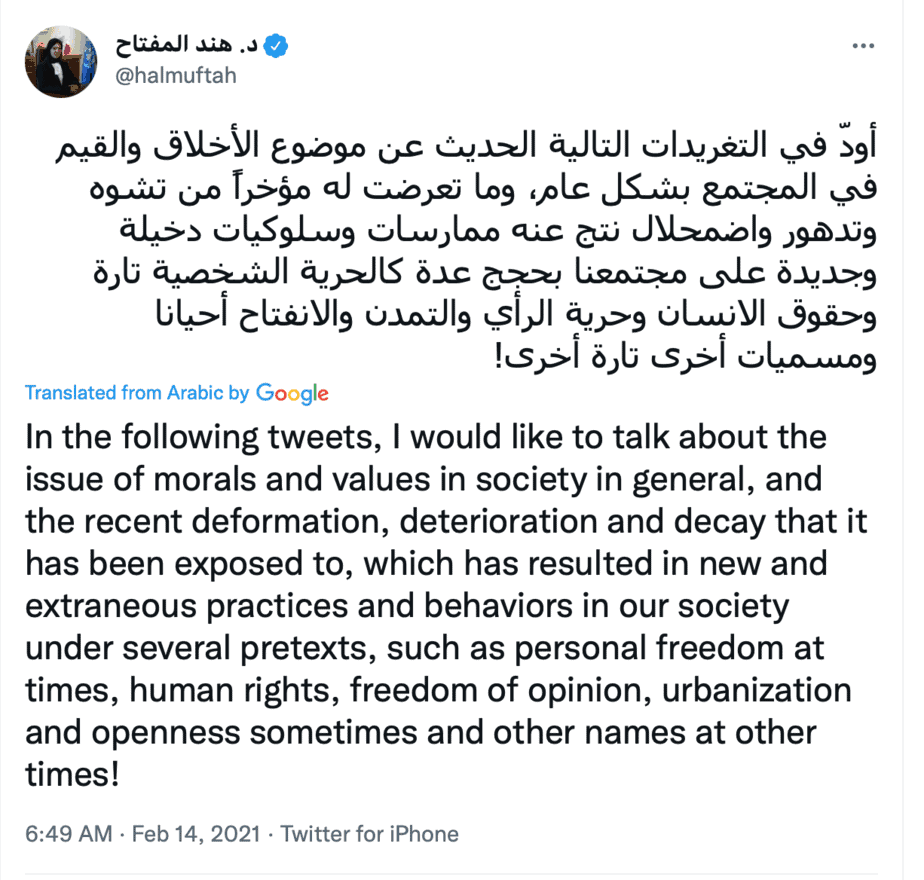 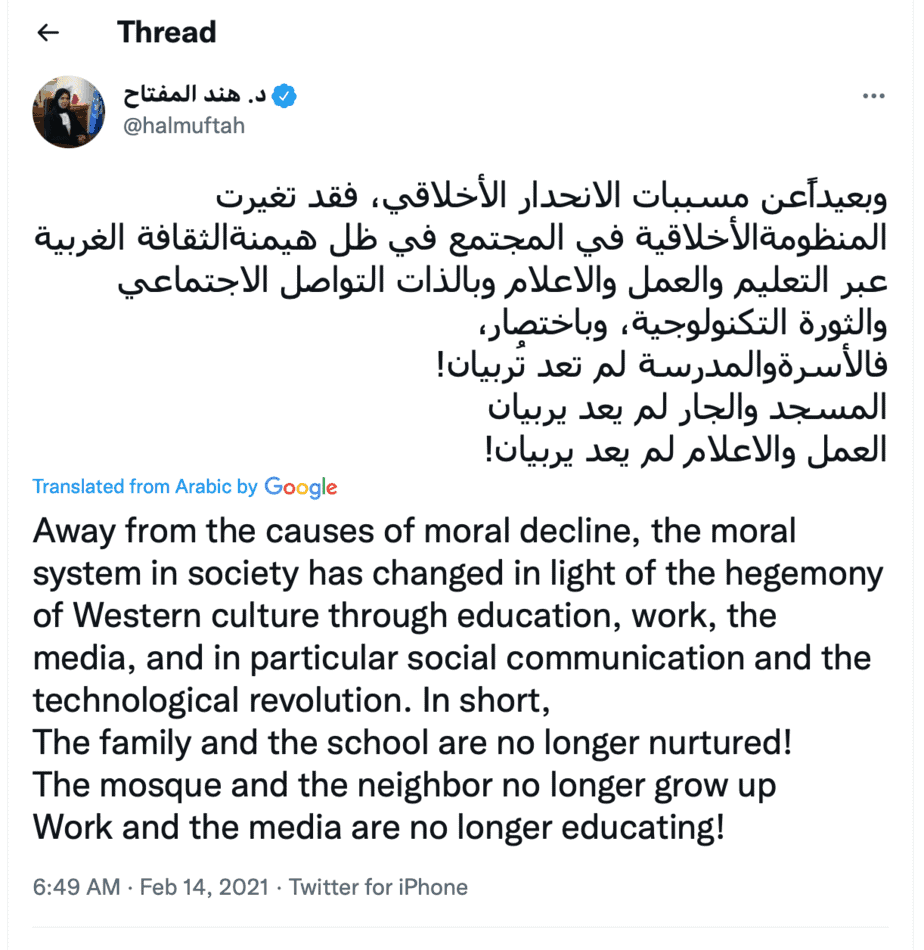 Al-Muftah:  Whenever we discuss Palestine, “international conspiracies” escalate in an “immoral and inhuman” manner 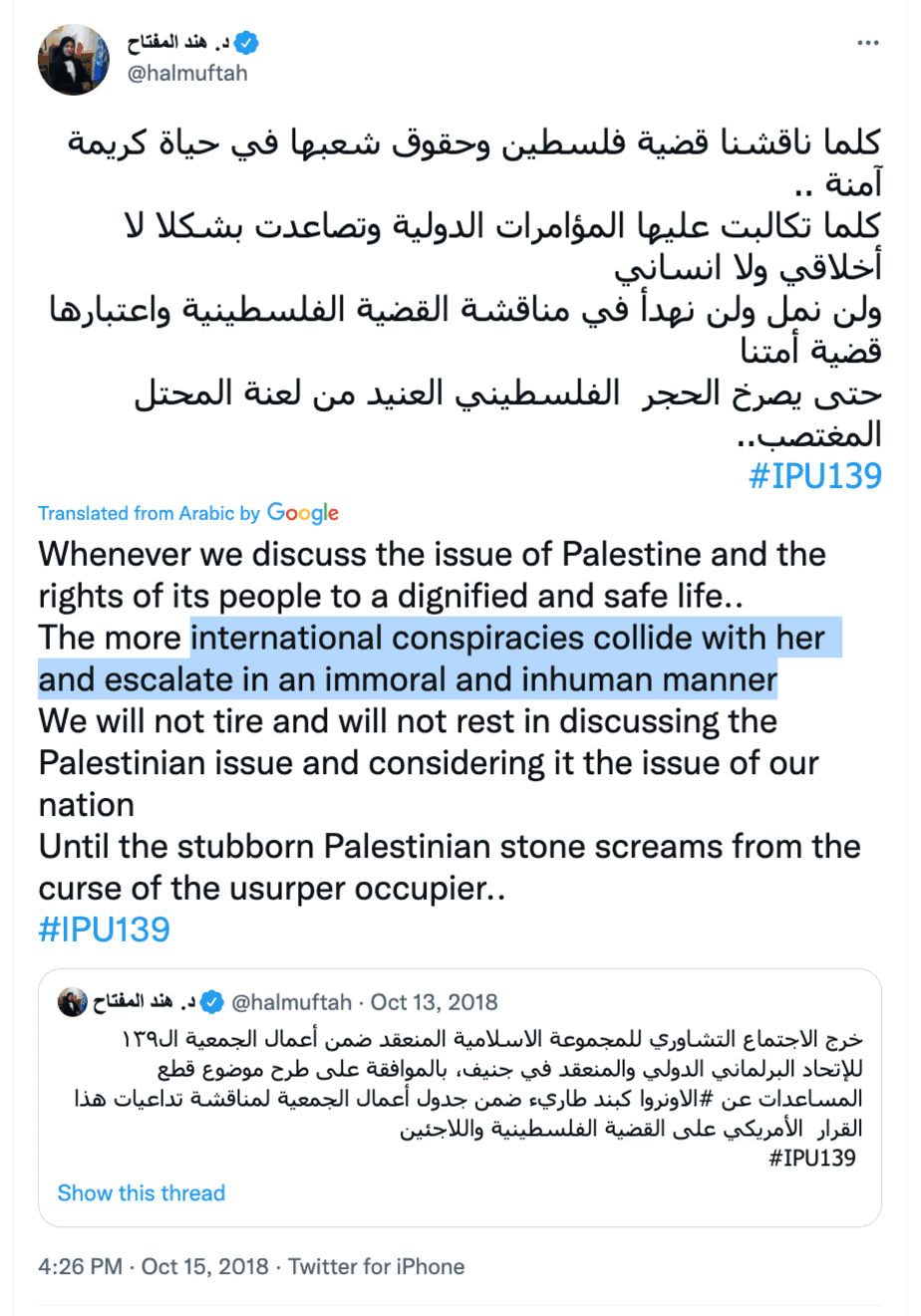 Al-Muftah:  “The end of America and others does not need any prophecy… Our Messenger and our Qur’an told us about it 1400 years ago, and it is inevitably true…” 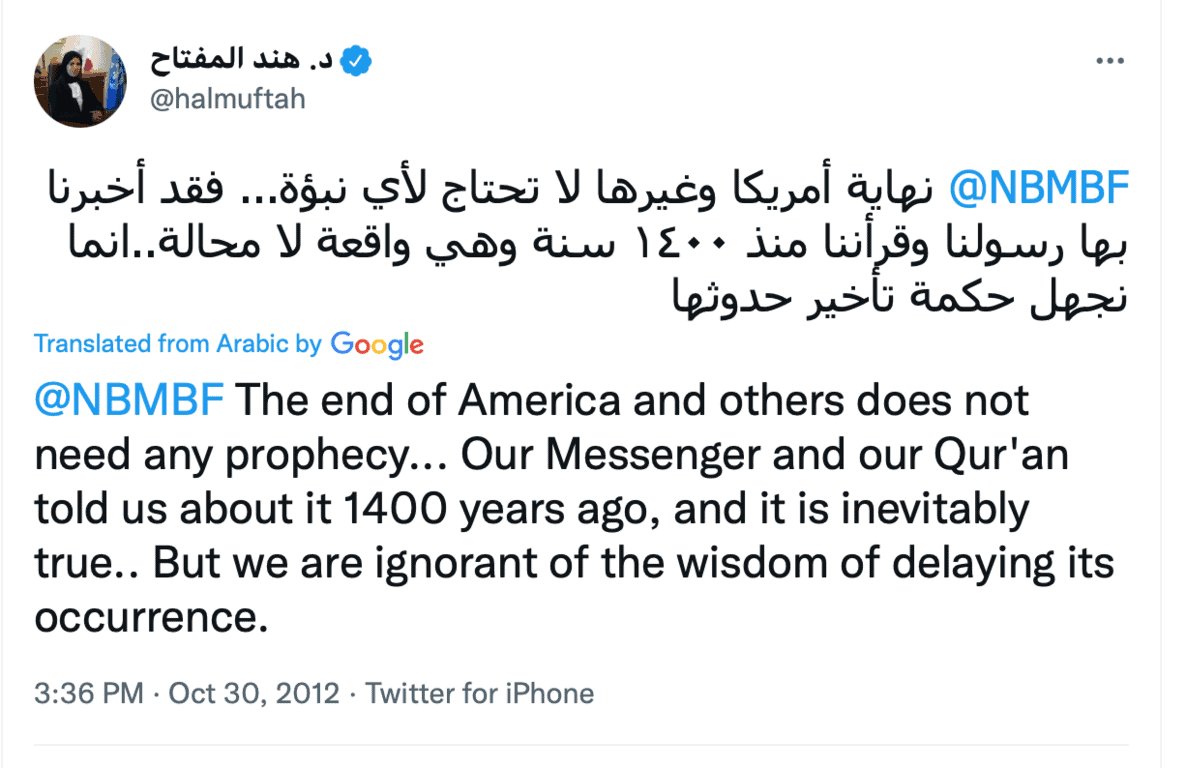