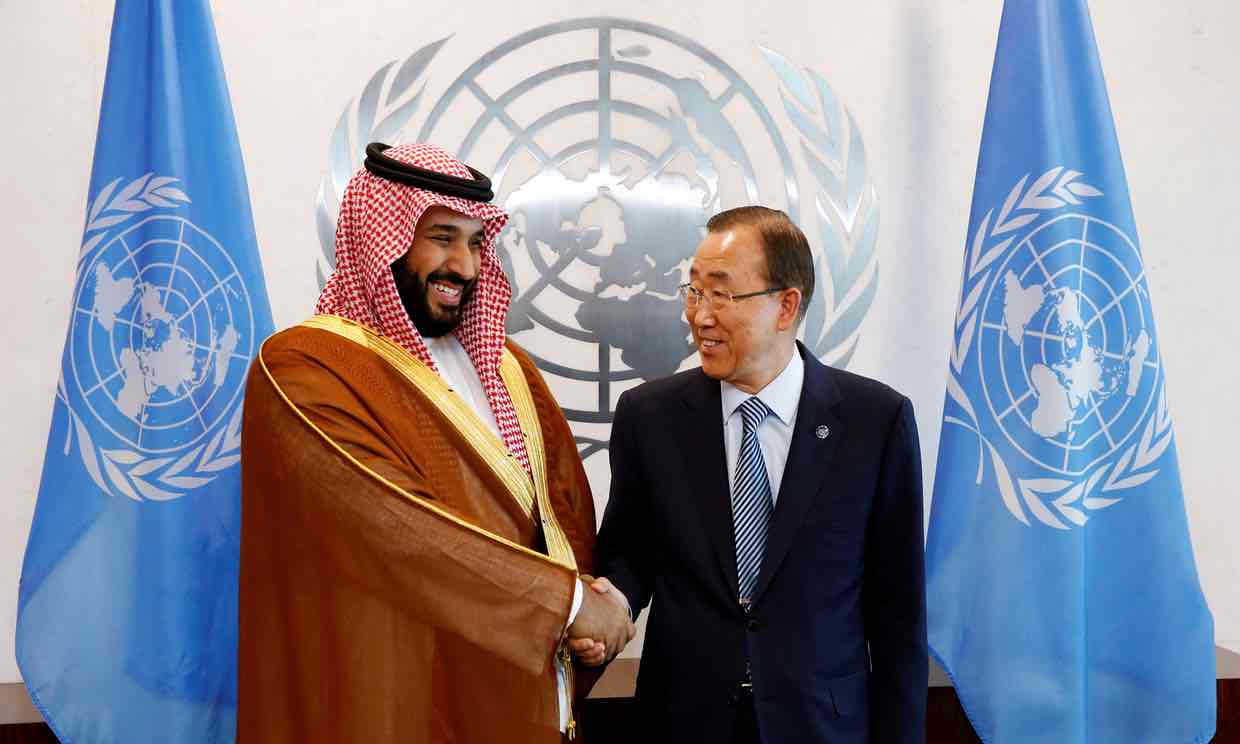 (REUTERS) UNITED NATIONS, June 7, 2016 | By Louis Charbonneau, Michelle Nichols and Yara BayoumyMuslim allies of Saudi Arabia piled pressure on U.N. chief Ban Ki-moon over the blacklisting of a Saudi-led coalition for killing children in Yemen, with Riyadh threatening to cut Palestinian aid and funds to other U.N. programs, diplomatic sources said on Tuesday.
The United Nations announced on Monday it had removed the coalition from a child rights blacklist – released last week – pending a joint review by the world body and the coalition of cases of child deaths and injuries during the war in Yemen.
That removal prompted angry reactions from human rights groups, which accused Ban of caving in to pressure from powerful countries. They said that Ban, currently in the final year of his second term, risked harming his legacy as U.N. secretary-general.
Speaking on condition of anonymity, the sources said Ban’s office was bombarded with calls from Gulf Arab foreign ministers, as well as ministers from the Organisation of Islamic Cooperation (OIC), after the blacklisting was announced last week. One U.N. official spoke of a “full-court press” over the blacklisting.
“Bullying, threats, pressure,” another diplomatic source told Reuters on condition of anonymity about the reaction to the blacklisting, adding that it was “real blackmail.”
The source said there was also a threat of “clerics in Riyadh meeting to issue a fatwa against the U.N., declaring it anti-Muslim, which would mean no contacts of OIC members, no relations, contributions, support, to any U.N. projects, programs.”
A fatwa is a legal opinion used in Islamic Sharia law. In Saudi Arabia fatwas can only be issued by the group of top, government-appointed clerics and are sometimes commissioned by the ruling family to back up its political positions.
Responding to the allegations, Saudi U.N. Ambassador Abdallah Al-Mouallimi said “we don’t use threats or intimidation,” and Riyadh was “very committed to the United Nations.”
Mouallimi denied any threat of a possible fatwa.
“That’s ridiculous, that’s outrageous,” he said, adding that the meeting of Saudi clerics was to approve and issue a statement condemning the blacklisting of the coalition.
On Monday Mouallimi described the annual U.N. report on states and armed groups that violate child rights in war as “wildly exaggerated” and demanded that it be corrected.
The main Saudi complaints were that the U.N. had not based its report on information supplied by the Saudi-backed Yemeni government and accused the world body of not consulting with the coalition. U.N. spokesman Stephane Dujarric, however, said on Tuesday that the Saudis had been consulted.
Several diplomatic sources said that the U.N. Relief and Works Agency for Palestine Refugees in the Near East (UNRWA) would be hit especially hard if the blacklisting were upheld. Saudi Arabia was the fourth biggest donor to UNRWA after the United States, European Union and Britain, having supplied it nearly $100 million last year.
Coalition members Kuwait and United Arab Emirates are also key donors for UNRWA, together supplying nearly $50 million in 2015.
In addition to Saudi Arabia, Dujarric said that Jordan, United Arab Emirates and Bangladesh contacted Ban’s office to protest the listing of the coalition. Diplomats said Egypt, Kuwait and Qatar also complained to Ban’s office.
The Saudi-led coalition includes Saudi Arabia, UAE, Bahrain, Kuwait, Qatar, Egypt, Jordan, Morocco, Senegal and Sudan.
There was no indication that the United States or any other Western Saudi allies encouraged the U.N. to reverse the blacklisting of the coalition.
The U.N. report on children and armed conflict said the coalition was responsible for 60 percent of child deaths and injuries in Yemen last year, killing 510 and wounding 667.
U.S. State Department spokesman Mark Toner said he was not aware that the United States had contacted the U.N. about the report.
“We take very seriously the protection of children in armed conflict in Yemen … and continue to urge all sides in the conflict in Yemen to protect civilians and comply with their obligations under international humanitarian law,” Toner said.
Dujarric said the removal of the coalition was pending a review of child casualties in Yemen and could be reversed, though Mouallimi said the deletion was “irreversible and unconditional.
Jordan’s U.N. Ambassador Dina Kawar described her country’s complaint to the U.N. chief.
“The report was accusing the coalition and of course we are a part of it,” she said. “So my (foreign) minister did contact the secretary-general and did voice his opinion that the report was biased and that they need to look into it.”
Bangladesh’s mission told Reuters that their foreign minister contacted Ban’s office prior to the reversal while on an official visit to Saudi Arabia.
One diplomatic source familiar with the situation said the Saudi fury was to be expected, adding that “the SG’s (secretary-general’s) reaction to the pushback was disappointing.”
Several diplomats cited the U.N. decision not to blacklist Israel last year over child casualties in the Gaza Strip after the Israeli and U.S. governments lobbied Ban hard, saying that it was clear the current U.N. chief was vulnerable to threats.
Another diplomatic source said the recent spat between the U.N. and Morocco over Ban’s use of the term “occupation” to describe Morocco’s presence in the disputed territory of Western Sahara had set a bad precedent.
He noted that when Morocco demanded the expulsion of dozens of civilian staff in the U.N. peacekeeping mission there earlier this year, the U.N. Security Council failed to rally behind Ban with a strong show of support. That, he added, set a dangerous precedent for the world body’s 193 member states.
“The message was clear,” the diplomatic source said. “If you get tough with the secretary-general, the Security Council isn’t going to come to his aid.”
(Additional reporting by Angus McDowall in Riyadh, Yara Bayoumy, Lesley Wroughton and David Alexander in Washington; Editing by Andrew Hay)