GENEVA, September 18, 2020 — The Islamic Republic of Iran, Saudi Arabia, Pakistan and Belarus were among members of the UN’s 54-nation Economic and Social Council, a principal organ of the world body, who voted on September 14th to single out Israel as the only country in the world to be rebuked by the council this year for allegedly violating women’s rights.

In a resolution adopted 43 to 3, with 8 abstentions (see breakdown below), the Jewish state was accused of being  a “major obstacle” for Palestinian women “with regard to the fulfillment of their rights, and their advancement, self-reliance and integration in the development of their society.”

The council declared that “women and girls” are impacted by the “continuing systematic violation of the human rights of the Palestinian people by Israel, the occupying Power.”

The resolution in its preamble made global references to “violence against women and girls in all its different forms and manifestations worldwide” and to the need to “eliminate all forms of violence against women” in “all regions of the world,” however Israel was the only country held up for criticism.

Cuba, Syria, North Korea and Venezuela were among the countries who sponsored the resolution via the Group of 77, a bloc today made up of 134 states, and this year represented by Guyana.

Out of 20 items on the UN Economic and Social Council’s 2020 agenda, only one — Item No. 16 against Israel — targeted a specific country. All the other focus areas concern global topics such as disaster relief assistance and the use of science and technology for development.

The resolution turns a blind eye to how Palestinian women’s rights are impacted by their own governing authorities — the Palestinian Authority in the West Bank, and Hamas in Gaza. Nor does it make any criticism or any reference at all as to how women and girls are discriminated against within patriarchal Palestinian society. On the contrary, the resolution praises what it calls “Palestinian initiatives at the legislative, administrative and security levels to advance women’s rights.”

Neuer condemned the delegates’ “hijacking” of the UN body as a forum to target Israel. “At a time when Iran is imprisoning women’s rights activists like Nasrin Sotudeh and Narges Mohammedi, Saudi Arabia is imprisoning and torturing numerous women’s rights activists, Pakistan has the highest number of documented and estimated honor killings per capita of any country in the world, and Belarus is beating women protesters in the streets, it is the theater of the absurd for these misogynistic regimes to be singling out Israel — alone in the world — as an alleged violator of women’s rights,” said Neuer.

“We are also disappointed in other countries which joined the jackals in scapegoating the Jewish state, including France, Spain, Ireland, Japan, Latvia, Luxembourg, Mexico, Norway and Uruguay.”

Shortly after adopting the text, ECOSOC then condemned Israel in a second resolution for allegedly violating the economic and social rights of Palestinians.

Discussion of the resolutions followed the presentation of a biased report in July by Tarik Alami, representative of the Beirut-based Economic and Social Commission for Western Asia, the UN regional body for the Middle East that includes 18 Arab states, but not Israel. 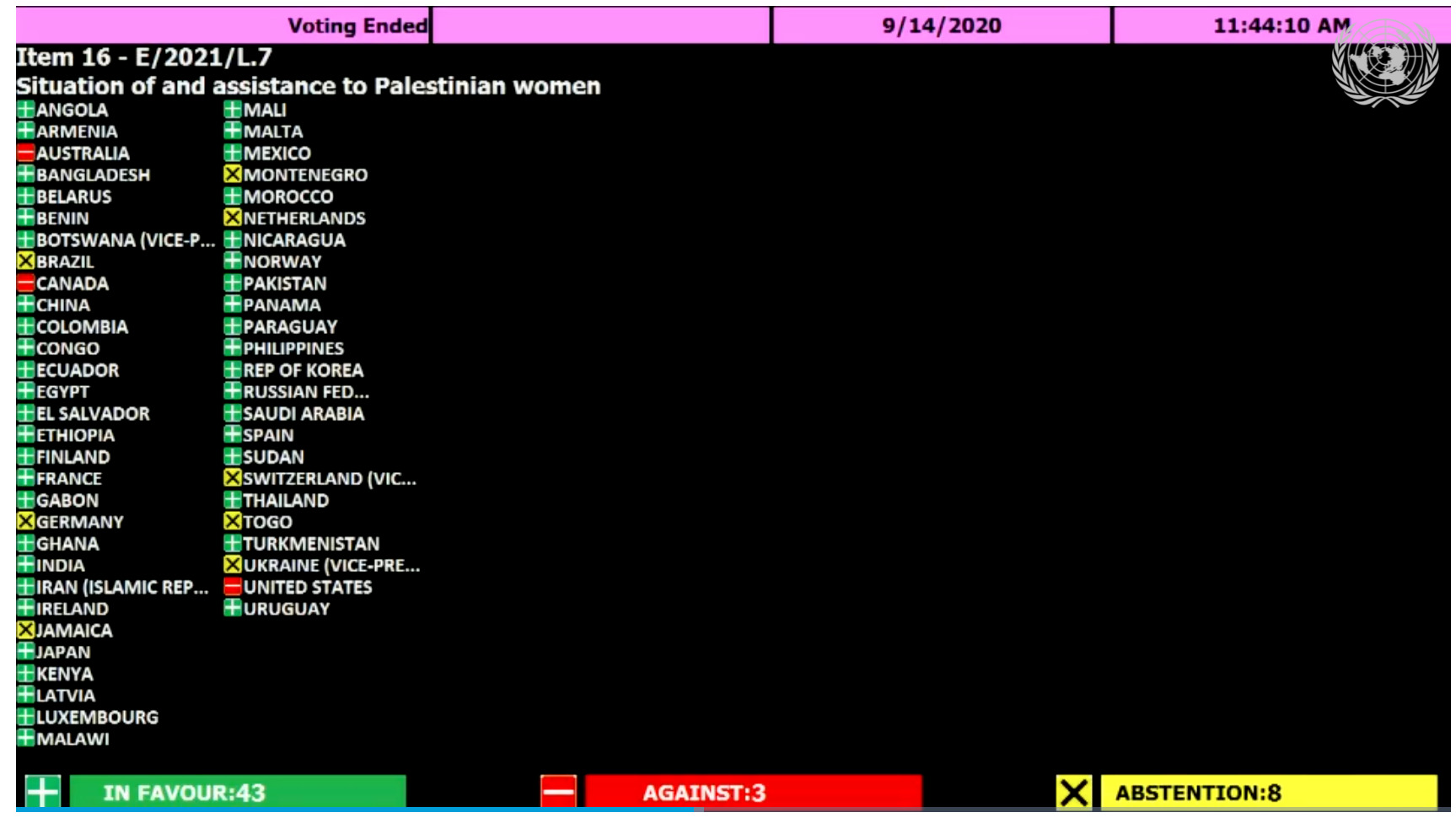 Results of the vote to rebuke Israel on women’s rights:

Notably, the Netherlands changed its vote to Abstain this year, due to parliamentary outrage in wake of UN Watch’s report on the country’s Yes vote on the same resolution last year.