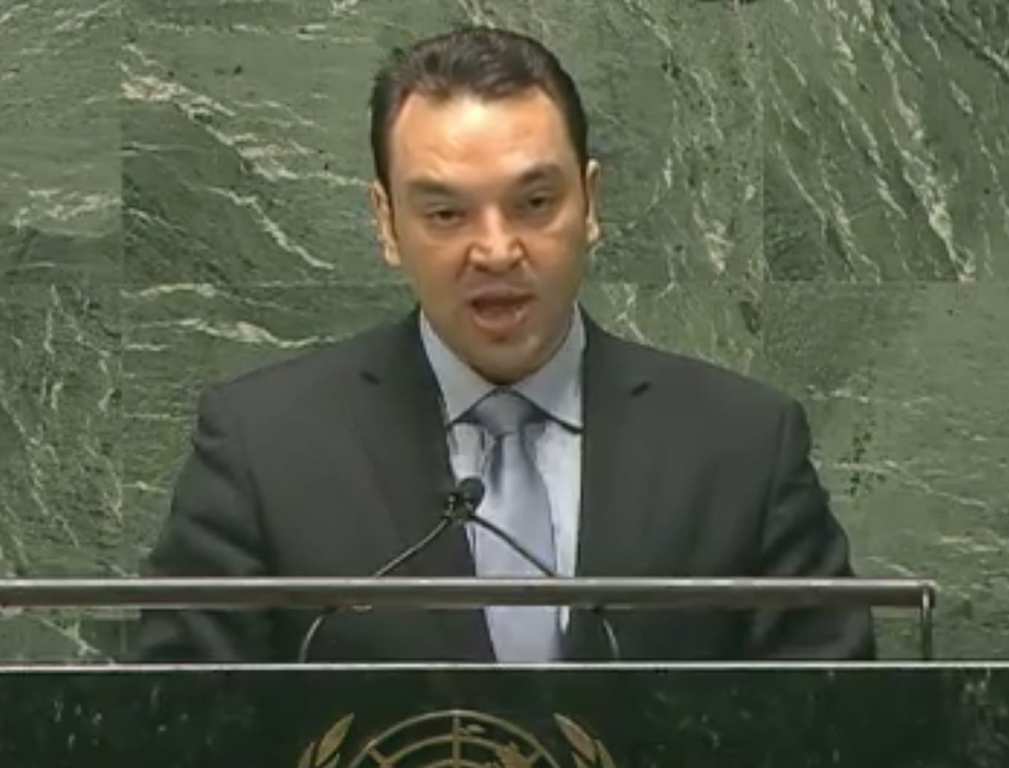 UN Watch, an independent non-governmental monitoring group based in Geneva, also called on the U.S. to deport Mr. Adi, whose identity was first exposed by The Algemeiner newspaper yesterday.
“The U.S. government needs to investigate how a long-time agent of the Syrian regime, close ally of Iran, was granted a visa to work and teach in America,” said Hillel Neuer, executive director of UN Watch.
“It ought to be a matter of profound concern that an American university would allow an apologist for the Syrian regime’s genocide to be a teacher.”
“When the United Nations debated Syria’s culpability for bombing its own people, Mazen Adi said that the Syrian authorities ‘upheld all their legal and judicial responsibilities,’” Neuer went on to say. “He is a liar and an apologist for mass murder.”
While serving as a Syrian delegate and legal advisor at the UN, Mr. Adi systematically acted as an apologist for the mass murder committed by the Assad regime against his own people, helping Syria to win impunity at the UN to conduct continued war crimes.
Mr. Adi joined Rutgers in September 2015, where he teaches international criminal law, political science, and United Nations and global policy studies.
Prior to Rutgers, Adi had served for 16 years as a Syrian diplomat, including as a legal advisor and occasional chargé d’affaires at the Syrian mission to the UN in New York.
According to the UN’s official record, Adi said in 2012 before the Security Council that “international gangs led by some Israeli religious figures are now trafficking children’s organs.”
Below are numerous examples of Mr. Adi’s efforts to cover up the Syrian genocide, and of his spewing lies and hatred over many years.

MAZEN ADI: SYRIAN APOLOGIST FOR MASS MURDER, 2011-2014
12 February 2014 – Mazen Adi: “Syrian Government is more concerned than anyone else for its own people”:

It is regrettable that some States have once again exploited this meeting to reiterate their allegations relating to the situation in my country, in order to disrupt the ongoing developments with regard to the delivery of humanitarian assistance and the ongoing Geneva II talks. Despite our objection to such methods, we stress that the Syrian Government is more concerned than anyone else for its own people. It is carrying out its constitutional duty to restore security and stability and to protect our people from the terrorism that is targeting the Syrian State and the Syrian people

10 February 2014 – Mazen Adi: Countries speaking out against Syrian genocide seek to “dominate the region and its peoples and their capacities”:

Those who champion counter-terrorism have ignored for too long this malignant threat to Syria, neighbouring countries and the States of the world. They have chosen to use the situation in Syria as a means of making cheap political gains that forward their plans in the region, particularly their desire to dominate the region and its peoples and their capacities.

6 November 2012 – Mazen Adi: Syrian authorities “upheld all their legal responsibilities,” “preserves rights of the accused throughout all stages of trial”:

MAZEN ADI ( Syria) said that the Rome Statute was intended to help end impunity for the perpetrators of crimes listed in the treaty, namely war crimes, genocide, crimes against humanity and aggression.  The delegates that had participated in the Rome Conference would not have foreseen that the rules they laid out would one day be used in the interest of “political and interventionist agendas” that had nothing whatsoever to do with ending impunity, and as a vehicle to overthrow Governments and interfere in the affairs of States.  Neither would the drafters of the Statute have foreseen that the definition of “crime of aggression” would be diluted in favour of those States perpetrating that very crime.
Indeed, it was a source for concern that some would hide behind the idea of international criminal justice to promote ideas far removed from those on which the United Nations was established.  It was also regrettable that States would mention Syria in their statements, using the Assembly as a forum to distort facts and exploit the law in the service of a “crude interventionist policy”.  Syria was presently confronting an unprecedented wave of terrorism and violence.  The Government had repeatedly described the details of what was happening, as well as the steps it had taken to restore order, but there was not enough time to repeat those details today.  However he stressed that the Government remained serious about implementing reforms in response to popular demands, and that the Syrian authorities upheld all their legal and judicial responsibilities.  Further, the independent judicial commission recently established was carrying out its obligation to refer to courts those who had perpetrated crimes, while preserving the rights of the accused throughout all stages of trial.

MAZEN ADI ( Syria) said the issue at hand was of great importance in the current circumstances; the encroachment of the Security Council on the General Assembly was an attack on the rule of law on an international level.  This resulted in “astounding multi-complicity” of the Charter, with the use of force and the intruding on territorial integrity.  In this context, he said, the negative impact of unilateral levels of the rule of law was harmful in many ways.  States should respect international law, and he stressed the need to respect the sovereignty of States, their territorial integrity, the rights of people under occupation, and their right to self-determination.
He stressed Syria’s commitment to seeking peaceful resolution of conflict.  Yet, despite the rule of law, its implementation in international relationships was lacking because of existing double standards, and the use of force against weaker parties.
He said that the response of his country’s authorities to its people at the beginning of recent “tragic events” was swift.  The President had published reforms that were implemented quickly.  These reforms were instituted to allow for greater participation in the political process, the development of national unity, and the protection of people, to name a few considerations.  Also adopted were new laws on political parties and the electoral process, and local government had been placed in the hands of the people.  Laws on peaceful demonstrations, freedom of information and the independence of the media were also instituted, as well.  He added that a national committee would be convened soon to review his country’s Constitution.
These “sweeping reforms”, he said, were a response to the people, despite the interference of other parties.  Notwithstanding the historic progress made in the rule of law at the national level, he emphasized that each country had unique circumstances, culture, customs, and history; the rule of law could take multiple forms unique to each country and there must be sensitivity to those attributes and qualities.  This would avoid political coercion and the trampling on a State’s sovereignty.  In conclusion, he stated that human rights, the rule of law and democracy were intertwined and that each country needed to uphold the rule of law in accordance with the Charter and international human rights.

3 October 2011 – Syria was a “trailblazer” in “standing up to international terrorism”:

MAZEN ADI (Syria), condemning terrorism as unjustifiable criminal acts of aggression targeting individual people and threatening the territorial integrity of States, called for the application of clear standards and approaches by the international community in order to combat it.  The term “terrorism” had to be analysed and defined, he said, to delineate between heinous acts and peoples’ action toward self-determination.
He said Syria was a “trailblazer” in standing up to international terrorism, but terrorists continued to execute individuals, members of the military and prominent scientists in his country through acts which undermined domestic stability and security.
State terrorism, he asserted, was the most serious form of terrorism, as flagrantly exemplified by Israel against those in Arab territories, particularly in Gaza, and in the incident against the freedom flotilla in international waters.  Those practices should be defined as war crimes, he said.
He said Syria actively combated money-laundering and terrorism financing and was party to regional conventions on terrorism.  It would continue to work vigorously within the context of the United Nations Charter to combat terrorism and to conclude the comprehensive convention.

It is well-known that the main traffickers of conventional weapons in the world, particularly illicit weapons, are retired Israeli military officers working for Israeli weapons manufacturers and industries. It is clear that the Israel representative’s statement contradicts his country’s actions, since Israel’s involvement in the illicit trafficking of weapons across the globe encourages international terrorism and protects drug traffickers and secessionist movements around the world. Indeed, international gangs led by some Israeli religious figures are now trafficking children’s organs. Finally, acts of international aggression, occupation and piracy by Israeli cannot be hidden from the international community.

Mr. Adi (Syrian Arab Republic) (spoke in Arabic): Israel is …  committing crimes against humanity … and has adopted a slow-kill policy against more than 1.5 million Palestinians there… Israel cannot change the terrible past of terrorism — the archives, encyclopaedias and museums are filled with facts about ethnic cleansing, war crimes and genocide committed by Israel in the course of its bloody history against Palestinians, Syrians, Lebanese, Egyptians, Jordanians and nationals of other countries. Israel introduced State terrorism in the region.

MAZEN ADI ( Syria) said the Geneva Conventions had been become an integral part of customary international humanitarian law and he welcomed the accession of all States to the conventions, which would affirm their validity.  Without these conventions, scourges would befall the world and the environment when wars broke out.  Humanitarian law in Islam, for the first time in history, prevented the targeting of women, children and the elderly; it also prevented trees from being cut down, people from being displaced and places of worship from being destroyed, and it espoused the good treatment of the wounded and prisoners.
Despite universality and codification of international humanitarian law, Israel, since its inception, had systematically targeted civilians, murdered children and the elderly, caused destruction to the environment and brought settlers from all over the world to displace the people living there.  In its “wars of aggression,” he said, it had tortured prisoners, and killed wounded soldiers and buried them alive.  Israel had violated the rudimentary principles of international law, but could no longer be absolved of its legal obligations under the Fourth Convention.
A failure to stand up to these practices, he continued, had resulted in the continued targeting of Palestinian civilians.  Israel built illegal settlements which had brought in immigrants from all over the world, despite the fact that the General Assembly and Security Council declared these actions illegal and illegitimate.  In that regard, he said, he wished to reiterate a people’s right to self-discrimination, and to free themselves from occupation, as relayed by international humanitarian law.

PrevPreviousBalfour Declaration & Moral Courage: Hillel Neuer in Stockholm
Next9 condemnatory resolutions against Israel from the Fourth Committee at the 72nd session of the U.N. General AssemblyNext