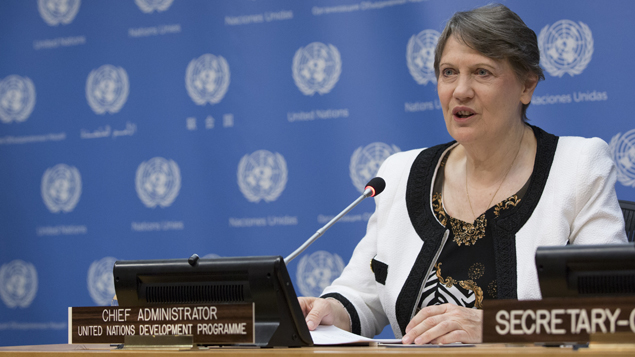 GENEVA, August 9, 2016 – Following today’s indictment of a United Nations Development Programme (UNDP) aid worker in Gaza for supporting Hamas terrorist activities (see press release below), UN Watch is calling on UNDP chief Helen Clark, a candidate to be the next UN Secretary-General, to draw conclusions, and for Ban Ki-moon to urgently establish an independent, international commission of inquiry to investigate the apparently pervasive subversion in Gaza of UN and other international humanitarian aid funds by Hamas.

“When a vital UN aid agency is involved in hiding weapons for a terrorist organization and building its military infrastructure, there must be accountability, and it must come from the top,” said Hillel Neuer, executive director of UN Watch. “Helen Clark must take responsibility.”

“No one is accusing UNDP senior management in New York of knowingly aiding Hamas activities, but when they fail to implement minimum controls in a place ruled by a murderous regime—as documented with OCHA in Syria—that could amount to extremely reckless conduct,” said Neuer.

“Sadly, UNDP has a history of pandering to the Hamas regime in Gaza, including in numerous public statements which have whitewashed Hamas’ weaponization of homes, schools, and hospitals.”

“While UNDP and its partner UNRWA insist that they act solely in response to humanitarian need, with impartiality and neutrality, and that their goal is to improve the economic and social conditions of the Palestinian people, the disparity with their compliant approach to Hamas appears to be influenced by their fear of being expelled from Gaza, or of other more severe consequences, requiring that they stay in the good graces of the Hamas regime,” said Neuer.

(Communicated by the Israel Security Agency)

A humanitarian aid worker in the Gaza Strip has been arrested and charged with using his position to provide material assistance to Hamas’ terrorist/military efforts. This is the second such indictment of a Palestinian aid worker in Gaza in less than a week.

Waheed Borsh was arrested on 16 July by the Israel Police and Israel Security Agency (ISA) and indicted in a civilian court in southern Israel today (Tuesday, 9 August 2016). He was charged with assisting Hamas, an internationally-recognized Islamist terrorist organization.

Borsh, from Jabaliya in the Gaza Strip, has worked for the United Nations Development Programme (UNDP) in Gaza as an engineer since 2003. His areas of responsibility include demolishing houses damaged during armed conflicts and clearing the rubbish from sites after demolition.

The UNDP, an agency of the UN, is one of the world’s largest multilateral development agencies. It conducts development and rehabilitation projects for the Palestinian population of the Gaza Strip, which include assisting in the rehabilitation of housing damaged during armed conflicts.

During the Waheed Borsh investigation, it was discovered that he had been instructed by a senior member of the Hamas terrorist organization to redirect his work for UNDP to serve Hamas’ military interests.

Borsh confessed that he did indeed carry out activities that aided Hamas. For example, last year he helped build a military jetty in the northern Gaza Strip – utilizing UNDP resources – to be used by Hamas’ naval forces.

Also in 2015, he acted to persuade UNDP managers to prioritize the rehabilitation of housing in areas populated by Hamas members. Borsh was acting in response to a request by Hamas.

Additionally, Borsh disclosed information regarding cases in which Hamas would blatantly and aggressively exploit UNDP humanitarian activities for its own purposes. For example, when weapons or terrorist tunnel openings were discovered in houses being handled by the UNDP, Hamas would take control of the site and confiscate the arms and other materials. This violates clear UN procedures according to which UNMAS is supposed to be immediately notified as the United Nations Mine Action Service is the UN body in charge of dealing, inter alia, with explosive remnants of war. Borsh also disclosed information on Hamas tunnels and military bases which he had been exposed to during his work in Gaza.

Notably, according to Borsh, other Palestinians who work for aid organizations are also working for Hamas.

This case – along with last week’s case in which Hamas operative Mohammed El-Halabi infiltrated the World Vision humanitarian aid NGO in order to divert funds and other resources for use in Hamas’ military/terrorist efforts – demonstrates how Hamas exploits the resources of international aid organizations at the expense of the civilian population of the Gaza Strip.