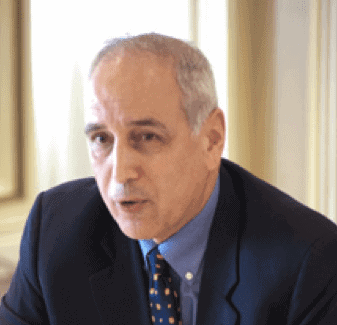 GENEVA, March 24, 2016 —  The UN Human Rights Council today confirmed the appointment of controversial Canadian academic Michael Lynk as “Special Rapporteur on the situation of human rights in the Palestinian territories occupied since 1967,” a position that, contrary to the official title, is in fact charged with investigating “Israel’s violations of the principles and bases of international law” — and disregards all human rights violations in the Palestinian territories committed by the Palestinian Authority, Hamas, Islamic Jihad, and others.
Amid intense pressure from Arab and Islamic states, the president nominated Lynk over numerous objections concerning the Canadian labor lawyer’s leadership role in Palestinian campaign groups and his inflammatory statements in which he admits seeking “to isolate Israel.”
In a letter yesterday, the president declared that Lynk, who teaches law in London, Ontario, was both impartial and objective. However, a UN Watch report two weeks ago documented the bias of Lynk, abd other favored candidates of the Arab states, prompting outrage from the Palestinian ambassador.
“The UN’s selection of a manifestly partisan candidate — someone who three days after 9/11 blamed the West for provoking the attacks on the World Trade Center — constitutes a travesty of justice and a breach of the world body’s own rules,” said Hillel Neuer, executive director of UN Watch, a watchdog organization in Geneva whose work has been praised by top UN officials including former Secretary-General Kofi Annan.
“Someone who accuses Israel of ‘Apartheid’ and openly seeks to dismantle the Jewish state is neither impartial nor objective. We call on Germany, the UK, the Netherlands and all other Council members to uphold the Council’s own basic principles and oppose Lynk’s nomination in tomorrow’s vote,” said Neuer.
On September 14, 2001, Lynk issued a statement blaming the attacks on “global inequalities” and “disregard by Western nations for the international rule of law.”
“One day after Islamists murdered and maimed hundreds in the heart of Europe, the UN’s appointment of someone who instinctively blames such attacks on the alleged crimes of Western nations sends absolutely the worst message, at the worst time.”
At the same time, UN Watch welcomed the rejection of the radical left-wing UK professor Penny Green, the candidate who was ranked first by the Egyptian-led vetting committee, and who is closely associated with anti-Western ideologues Noam Chomsky and Richard Falk. “Green was even more inflammatory than Lynk, and her letter to the president seeking to refute UN Watch’s report was a complete failure,” said Neuer.

Michael Lynk: In His Own Words

Mr. Lynk fails the minimal impartiality requirements set forth in Human Rights Council resolution 5/1 and resolution 16/21. He has been an ardent anti-Israeli activist for at least three decades, plays a leadership role in groups that advocate against Israel, and participates in political campaigns that use demonizing language against Israelis.
Cites Nazis to Indict Israelis: Speaking in 2005 at the annual gathering of anti-Israel campaigners organized by the UN’s Division for Palestinian Rights, Lynk cited Nazi war crimes in his call for “legal strategies” to prosecute Israelis. Lynk proposed a strategy to target Israelis in the domestic courts of Australia, Canada, Germany, the Netherlands, New Zealand, South Africa, and the United Kingdom. His paper only addressed alleged violations by Israel, while turning a blind eye to war crimes committed by Palestinian, Hezbollah, and Iranian state and non-state actors. “Legal strategies,” said Lynk, “can often form an important part of a broader political and social campaign.”
Blames 9/11 on the West: Only three days after the September 11, 2001 terrorist attacks that destroyed the World Trade Center in New York, Lynk pointed the finger not at radical Islamist terrorism, but at Western countries. Although 3,000 innocent victims were killed by Al Qaeda terrorists, Lynk chose to blame “global inequalities” and “disregard by Western nations for the international rule of law.” Lynk attributed blame to Western democracies yet notably omitted direct causes such as the 15 Saudi hijackers, the funding of terrorism by members of the Saudi regime, or the sustained Saudi export of extreme Wahhabist ideology worldwide. While Lynk’s September 14, 2001 statement included a pro forma condemnation of the attacks, he immediately diluted this by an amorphous reference to terrorism “everywhere.” Worse, Lynk qualified his condemnation with a “yet” where he proceeded to blame the West. The 9/11 conspiracy website “911 Blogger” has hosted Lynk statements.

Leadership of Arab & Palestinian Lobby Groups: Lynk is a member of the board of directors of the National Council on Canada-Arab Relations; a member of the advisory board of the “Canadian-Palestinian Education Exchange” (CEPAL), which promotes events like the “4th Annual Israeli Apartheid Week”[1]; and, together with former Arab League representative Clovis Maksoud, Lynk is on the advisory board of Friends of Sabeel North America.
Keynote on Palestinian “Resistance”: Lynk gave the keynote speech at CEPAL’s “International Day of Solidarity with Palestinians,” on November 29, 2001, where he spoke of “popular resistance.”
Signatory to Anti-Israel Petitions: Lynk signed a 2009 statement condemning Israel for alleged “war crimes” in Gaza together with Christine Chinkin, co-author of the Goldstone Report—an act which Judge Goldstone deemed grounds for her disqualification from the UNHRC commission of inquiry on Gaza. The statement made only a passing reference to Hamas crimes. Lynk also signed the one-sided statement by Richard Falk, entitled “Joint Declaration by International Law Experts on Israel’s Gaza Offensive.”
Prosecuting Israel is “The Principal Issue”: Lynk said that “the principal issue is to persuade countries, like Canada, France, Australia, England, and other countries that accepted the Rome Statute, to try Israel,” in an interview with IslamOnline.net, where he failed to call for prosecuting any Palestinian leaders for war crimes such as targeting civilians.
Addressed “One State Solution” Conference Aimed at Dissolving Israel: In March 2009, Lynk participated at a “One State Solution” conference co-sponsored by the “Trans Arab Research Institute.”[2] Six months after Palestinian Authority President Mahmoud Abbas rejected the peace offer from Israeli Prime Minister Ehud Olmert that would have created an independent Palestinian state containing all of the Gaza Strip, much of the West Bank plus land swaps, and a tunnel connecting the two areas, Lynk’s “One State” conference issued a statement claiming that “the Israelis continue to extend the two-state solution discourse primarily to pursue sustained confiscation of Palestinian land.” [3] The conference’s stated goal was “an exploration of the one state solution”—thinly veiled language for the elimination of the Jewish state— “as an emergent and increasingly important option for all.”[4]
Lynk’s “Solution” is Undoing Israel’s Creation in 1948: Speaking at a radical conference whose keynote speaker was Hamas supporter Richard Falk, Lynk said, according to a summary, that he “used to think the critical date in the Palestinian-Israeli conflict was 1967, the start of the occupation. Now he thinks the solution to the problem must go back to 1948, the date of partition and the start of ethnic cleansing.”
Tried to Block Jewish National Fund Award for University President: In 2008 Lynk tried yet failed to stop the president of his university, Paul Davenport, from accepting an award from the Jewish National Fund, which advances reforestation and water treatment in Israel, claiming that it “practices institutionalized discrimination.” President Davenport met with Lynk, and rejected his campaign.
Supports “Israel Apartheid Week”: At Western University, Lynk has hosted anti-Israel events and speakers.[5] He has promoted “Israel Apartheid Week.”
Seeks “Victory” at ICC to “Isolate Israel”: Lynk has called for “a victory at the International Criminal Court” that would “isolate Israel.” In his view, this would in itself “reestablish the importance of universal values.”[6]
———————-
[1] See http://www.ngo-monitor.org/reports/canadian_palestinian_educational_exchange_cepal_anti_israel_campaigns_cloaked_in_human_rights_/ .
[2] See http://www.492cafe.org/audio/events/2009_03_25,26-tari-1state/ and http://www.arabichour.org/One-state-Conference.htm.
[3] See http://cafe.comebackalive.com/viewtopic.php?f=1&t=42987 and http://forum.politics.be/archive/index.php?t-117874.html.
[4] Id.
[5] See “Davis speaks about human rights” at http://www.usc.uwo.ca/gazette/generate.asp?day=21&month=9&year=2004.
[6] See http://mondoweiss.net/2013/02/settlement-palestinian-international/#sthash.8Og1RG6g.dpuf.
[7] See, e.g., Lynk’s answers to questions 3 and 4 in Part II, and his letter in Part III, concluded in mid-sentence.