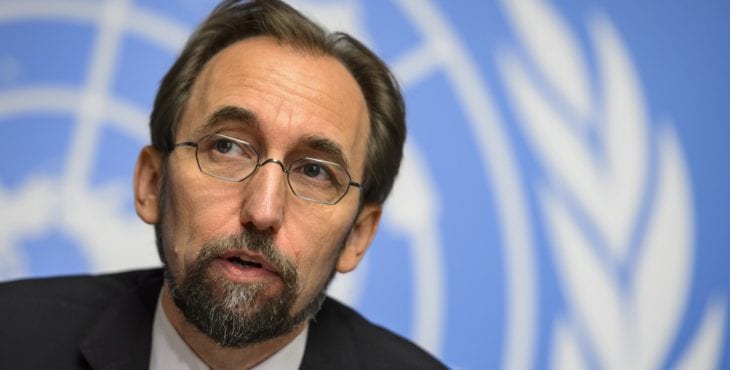 In sharp contrast to the statement of UN chief Ban Ki-moon, the world body’s high commissioner for rights, Prince Zeid Ra’ad Zeid Al-Hussein of Jordan, noticeably refused to call Wednesday’s Palestinian shooting of Israelis in Tel Aviv a terrorist attack, which killed 4 and injured 16, and he refused to mention that the attackers were Palestininan. Moreover, unlike Ban Ki-moon, Zeid’s statement declined to call out Hamas leaders for celebrating the murder.

Instead, Al-Hussein devoted the bulk of his statement to condemning Israel’s response to the murders, and he effectively justified the attackers by emphasizing the alleged “sense of injustice and frustration felt by Palestinians in this very tense time.” His statement his below.

Spokesperson for the UN High Commissioner for Human Rights:  Ravina Shamdasani
Location:   Geneva
Date: 10 June 2016
The High Commissioner condemns the gun attack in Tel Aviv on Wednesday in which four Israelis were killed and a number were injured. This is the largest loss of Israeli life in a single attack since the current surge in violence.

We are also deeply concerned at the response of the Israeli authorities, which includes measures that may amount to prohibited collective punishment and will only increase the sense of injustice and frustration felt by Palestinians in this very tense time. The response has included the cancelling of all 83,000 permits granted to West Bank and Gaza residents to travel during Ramadan, the suspension of 204 work permits of individuals in the alleged attackers’ extended families, and the sealing off of their entire home town by the Israeli security forces.

Israel has a human rights obligation to bring those responsible to account for their crimes. And this it is doing. However the measures taken against the broader population punish not the perpetrators of the crime, but tens – maybe hundreds – of thousands of innocent Palestinians.