BREAKING: Condemned by the world for antisemitism, UNHRC commissioner Miloon Kothari's non-apology apology letter argues his remarks were not antisemitic but only “perceived and experienced” to be such. “I have always condemned discrimination in all its forms.” What a scoundrel. https://t.co/iZ2SFsfISs pic.twitter.com/v8cKsLiW61

UN Watch Executive Director Hillel Neuer said in a statement that he “rejects Mr. Kothari’s attempt to whitewash his use of a notorious antisemitic trope that throughout history has sparked deadly pogroms and worse, and his literal questioning of Israel’s membership in the UN. His request for the president of the Human Rights Council to ‘enable and protect’ the inquiry should be turned down.”

Neuer added: “Mr. Kothari is the first UN investigator in the history of the United Nations to be called out for antisemitism by the head of the Human Rights Council, the Secretary General, together with Britain, France, Germany, the US and 14 other countries.”

Kothari “has disgraced the council, and cast a shadow upon the United Nations as a whole.” said Hillel Neuer, executive director of UN Watch. “ He must go, and the COI must be disbanded.”

In 2013, when China’s Geneva delegation requested the names of Chinese dissidents set to speak at the U.N. Human Rights Council, the U.N. complied. It was a decision that violated the organization’s own rules and put those testifying—including persecuted Uyghurs—in great danger.

Why the silence from world leaders? Reilly has written to European Union delegations, the United States, United Kingdom, and others, detailing how the U.N. endangered dissidents by sharing their names with an oppressive regime. In 2019, Dutch Foreign Minister Stef Blok wrote to the Dutch parliament, noting that both the U.N. Ethics Office and Office of the High Commissioner for Human Rights have admitted that the U.N. gives Beijing “lists of names” of Chinese dissidents set to speak at the council. U.N. Watch Executive Director Hillel Neuer has also sent letters on the matter to various Geneva delegations, including the U.S., U.K., Australia, Canada, France, and Germany—and received no response.

The United Nations last week disciplined an employee who works with Palestinians in disputed territories for her tweet condemning the Iranian regime-backed Palestinian Islamic Jihad (PIJ) and its “indiscriminate” missile fire into Israel.

“Muscroft’s groveling apology—for having rightly condemned the Islamic Jihad terrorist organization firing 1,100 rockets aimed at Israel—failed to appease the angry mob. The U.N., which is notoriously slow to act in genuine cases of employee misconduct, rushed to delete her Twitter account, and then remove her from the post.”

UN Watch Executive Director Hillel Neuer noted in a tweet that the United Nations Relief and Works Agency for Palestinian Refugees (UNRWA) fired an official in 2021 after he acknowledged that the Israeli strikes on Hamas were “precise.” “The UN’s policy is crystal clear: any official who dares to publicly defy the false narrative of Hamas and Islamic Jihad will be removed,” Neuer tweeted. 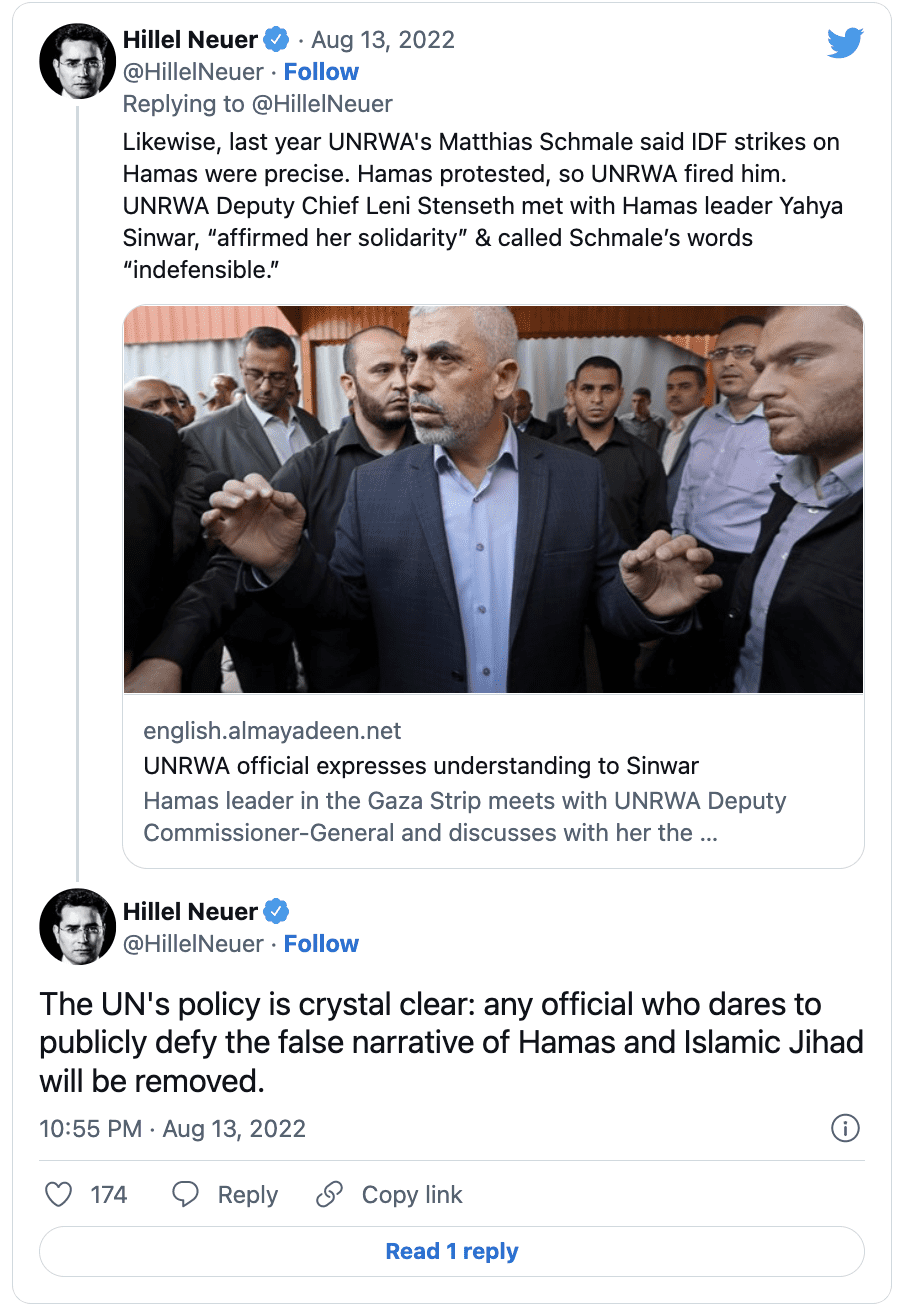 A United Nations human rights investigator defended Palestinians’ “right to resist” Israeli “occupation” after three days of fighting in which over 1,100 rockets were fired by Gaza militants at Israel.

“As she knows, for all Palestinian groups — Hamas, Islamic Jihad or Fatah — ‘resistance’ means killing Israelis,” wrote Hillel Neuer, Executive Director of the Geneva-based UN Watch NGO. “By inciting to violence as a UN human rights expert, you are a disgrace to the United Nations and the noble principles of its Charter.”

The treatment of Muscroft also stood in stark contrast to the lack of any disciplinary measures against Francesca Albanese, the UN’s Special Rapporteur on Palestine.

Albanese has repeatedly accused Israel of “apartheid,” “genocide” and “war-crimes,” according to UN Watch, a Geneva-based NGO monitoring UN activity.

Cited in L’Espresso Repubblica, “Putin’s regime? Madmen, servants and warmongers. If I hadn’t gone away I wouldn’t have been able to call myself a man anymore,” August 16, 2022:

When Putin’s Russia invaded Ukraine, Boris Bondarev realized he could no longer lie to himself. On February 24 it became clear that the only possible gesture of dignity in order not to be complicit in “this bloody ignominy” was to leave the post of Russian diplomat of the Russian Permanent Mission to the United Nations in Geneva. He had to leave and out loud. He was the highest-ranking Russian diplomat to publicly resign. On 23 May he gave his cry of truth to clear lines: “The never felt shame towards my country for the aggressive war unleashed by Putin against Ukraine, a crime against the Ukrainian and Russian people.” An open letter of “overdue” resignation, was sent to his colleagues and also shared on social media by Hillel Neuer, international lawyer and executive director of UN Watch, which made headlines around the world.

Amnesty International removes the status of a “prisoner of conscience” from the Russian opponent Alexei Navalny, after accusing him of “xenophobic comments”. February 2022. “Hamas, Hezbollah and Iran want to eliminate Israel, but who would have thought they would find allies in Amnesty International?” wondered the Wall Street Journal. A report by the famous human rights NGO labels Israel as an “apartheid” state that deserves the moral opprobrium and legal sanction of the West. The Amnesty report is a lengthy indictment against Israel that attempts to prove it is an apartheid state in the way it treats Palestinians. The Amnesty report is not another denunciation of Israeli settlements, but of the very existence of Israel. The report treats 1948, the year of Israel’s foundation, as the original sin from which all others derive.

Amnesty is now overwhelmed by the report accusing Ukraine of endangering the civilian population. Oksana Pokalchuk, director of Amnesty International Ukraine, announced her resignation from the organization that had tried to dissuade her from publishing the report as it was written. “Amnesty’s report puts Ukrainian civilians in danger,” wrote Hillel Neuer, director of UN Watch yesterday. “It encourages Russia to attack civilian areas, blames Ukraine and calls for the support of an international human rights group. Last year, Amnesty stripped Alexei Navalny of his prisoner of conscience status. Their leaders should resign. Now”.

The Canadian government has cut funding to an anti-racism initiative after one of its senior consultants was discovered to have made several antisemitic and racist tweets.

According to screenshots tweeted by Hillel Neuer, the Canadian-born founder of non-governmental organization UN Watch, annual returns reports and other filings for the Community Media Advocacy Center are submitted and signed by Gretchen King, Marouf’s wife.