This report examines the record of Michelle Bachelet as UN High Commissioner for Human Rights by examining a broad and indicative sample of her statements during four years in office.

UN Watch reviewed every country criticism published by Ms. Bachelet on her UN website during her tenure, from  September 1, 2018 through August 31, 2022, by searching the Media Center section of the Office of the High Commissioner for Human Rights (OHCHR). We reviewed statements published there by the High Commissioner, the Assistant Secretary-General for Human Rights, as well as their spokespeople.

Our findings refer only to official statements that were initiated by Michelle Bachelet at her own discretion. They do not count criticisms found in statements mandated by the Human Rights Council, global omnibus updates to the Council, statements made during or after official country visits, statements at UN events, thematic statements, statements made on annual commemorative days, or her farewell speech.

The following set of tables and graphs measures the quantity and strength of the High Commissioner’s statements on 24 non-democracies, being countries failing to meet the minimal standards of a “Free” democracy as rated by Freedom House, as well as 24 democracies rated “Free” by Freedom House. For each country listed, the tables and graphs show the number of criticisms initiated by High Commissioner Bachelet during her four-year term, as well as our assessment of whether the statement is weak, moderate, or strong, and whether it contains any praise. For the complete data, click here.

Tables of Statements by Michelle Bachelet on Select Countries 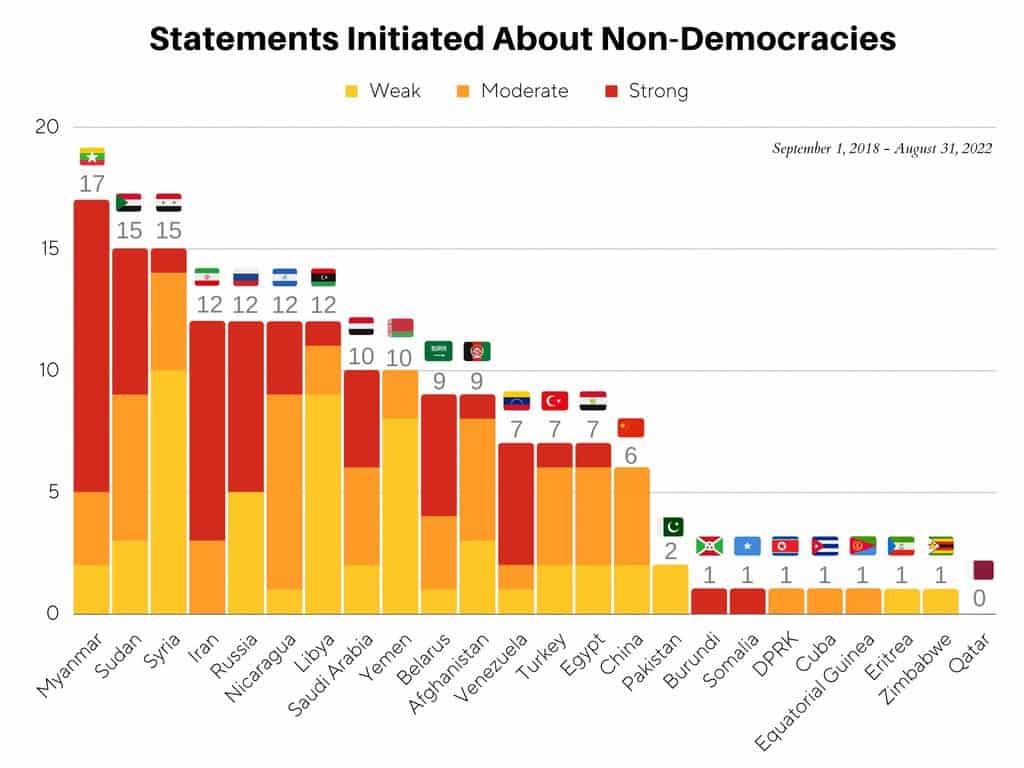 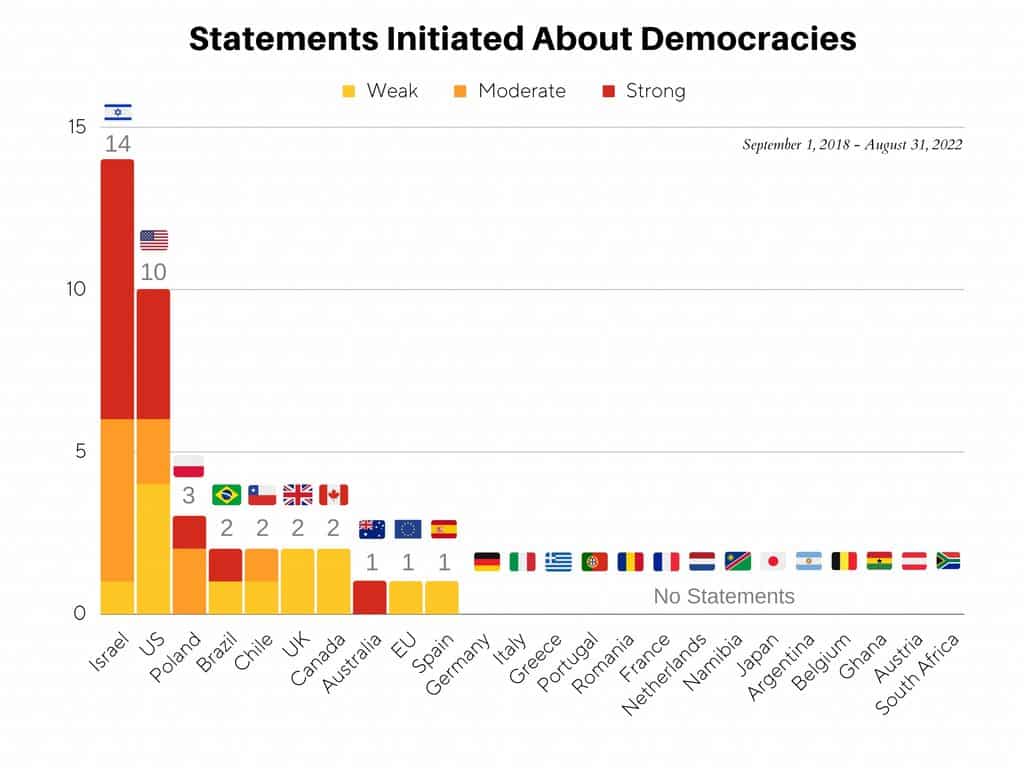 High Commissioner Bachelet was strong in calling out abuses in the following countries:

[1]  UN Watch urged Bachelet to denounce Russia’s imprisonment of Volodymyr Balukh, Airat Dilmukhametov, Ivan Safronov, Vanessa Kogan, and Margarita Yudina. She failed to speak out. Likewise, UN Watch first appealed to Bachelet to speak out on Alexei Navalny on July 30, 2019, and then again on 13 separate occasions. Only on February 3, 2021 did her office finally make a statement for Navalny. Thereafter, UN Watch and its director made over 20 pleas for Bachelet to demand Navalny’s proper treatment, release, and more recently for Russia to simply disclose his whereabouts, yet she issued no press releases on his behalf.

[2] On April 12, 2022, immediately after Vladimir Kara-Murza was arrested, UN Watch Executive Director Hillel Neuer made the following appeal to Bachelet on Twitter: “We urge you to speak out on behalf of the international community to show solidarity with courageous Russian dissident Vladimir Kara-Murza—who has testified repeatedly at the United Nations—and to demand his immediate release from arbitrary detention.” Many other similar appeals were made to Bachelet, yet to no avail. Likewise, on May 2, 2022, a coalition of 25 human rights groups that co-sponsor the annual Geneva Summit for Human Rights and Democracy, led by UN Watch, appealed to Bachelet to demand the release of Mr. Kara-Murza, along with all other prisoners of conscience jailed for protesting Putin’s war in Ukraine. Bachelet failed to act, issuing no statement or reply to the appeal.  On May 12, 2022, at an urgent session of the Human Rights Council, UN Watch’s director took the floor on behalf of a cross-regional coalition of 35 human rights NGOs and urged Bachelet to speak out for Mr. Kara-Murza; she remained silent. Still, UN Watch continued to campaign: “@MBachelet @UN, do not be silent. Stand with Vladimir. Stand with his wife Evgenia.” (July 11, 2022). UN Watch repeatedly made more such appeals to Bachelet. Regrettably, to no avail.

[3] This followed a December 2020 Joint Statement by UN human rights experts on China’s crackdowns against dissent.

[4] See, for example, the July 2019 Joint Appeal to Michelle Bachelet by 22 Countries concerning abuses by China in Xinjiang; and the October 2020 Joint Statement delivered by Germany on behalf of 39 Countries on China’s abuses in Xinjiang and Hong Kong. Similar joint statements were delivered in 2021 and 2022.

[5] In addition, Bachelet made two statements that addressed Turkey’s obligations to investigate the 2018 murder of Jamal Khashoggi in the Saudi consulate in Istanbul, however, both statements were essentially criticisms of the Saudi government, and therefore did not qualify as criticisms of Turkey.