In a letter of protest handed to Israel’s ambassador to UNESCO on Wednesday, the agency’s director general complained about a cartoon published in the Israeli newspaper Haaretz, saying it constituted “incitement” and “endangers the lives of unarmed diplomats.”

First of all, Haaretz is a frequent critic of the Israeli government, and this cartoon was clearly meant as a wry referral to the government’s anger at UNESCO for having accepted Palestine as a full member. And so it’s ironic that the UN Educational, Scientific and Cultural Organization, whose mandate includes press freedom, should object to such legitimate commentary – especially since it appears in a country whose laws protect freedom of speech.

But most shocking is UNESCO chief Irina Bokova’s display of inconsistency in having Eric Falt, the agency’s assistant director general for external relations and public information, summon Ambassador Nimrod Barkan to make the protest.

In June 2010, UN Watch raised the issue of anti-Semitic and racist caricatures that regularly appear in the state-controlled press of Jordan, Syria, Qatar, Oman and elsewhere. Our compelling testimony before the UN Human Rights Council described several cartoons that we showed were “reminiscent of the Nazi era.” We wonder whether the UNESCO chief or her spokesman have ever said anything about those cartoons. 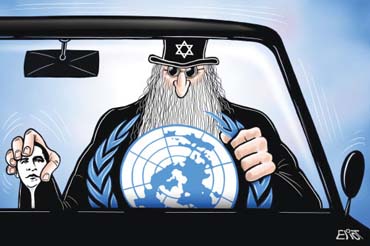 Many of the cartoons depict the UN as being controlled by evil Jewish forces. We are not aware of any UN agency having ever been concerned about the safety of its staff based on what they show.

Finally, in many similar instances in the past, UN officials used a traditional and effective way to response to news stories that they did not agree or wanted to clarify: they submitted a letter to the editor.  Edward Mortimer, Director of Communications for Kofi Annan, publilshed several such letters to the New York Times. Imagine if they had summoned the US Ambassador…

Cuba complains of minute of silence for Holocaust victims at UNESCO meeting, then calls one for Palestinians