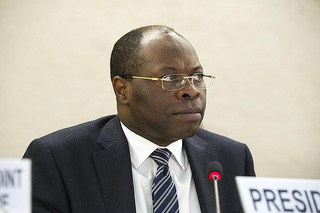 
Two days after the Human Rights Council elected the Ambassador of Gabon as its president for the 2014 sessions, the Gabonese delegation in New York, on behalf of the African Group, successfully passed a resolution undermining the authority of the UN Human Rights Council as the world’s top human rights body.
The UN General Assembly “deferred consideration” of a critical HRC resolution titled “Cooperation with the United Nations, its representatives and mechanisms in the field of human rights” (HRC 24/24). This is a rare instance for the GA to open up a particular HRC resolution. Because the HRC is a subsidiary organ of the General Assembly, the latter possesses the theoretical power to revise and even over-rule decisions by the former, but this has been seldom exercised. (See 2007 exception discussed below.)
HRC 24/24 seeks to protect the freedom and safety of human rights defenders, and would also appoint a UN official to prevent and address instances of intimidation and reprisals. The Council first adopted the resolution in September 2013 with a strong majority of its 47 member states (31 in favor, 1 against, 15 abstentions).

(Interestingly Gabon was the sole country to vote no on this resolution. The UN record notes: “The representative of Gabon subsequently stated that there had been an error in its voting and that it had intended to vote in favour.”)
The new President of the Human Rights Council, Ambassador Baudelaire Ndong Ella of Gabon, pledged on Monday “build on the success of his predecessor to ensure all human rights were respected, and, in particular, to protect those persons who have cooperated with human rights bodies.” [emphasis ours] He also promised to uphold the Council’s role at the primary UN body dealing with human rights.
However, Gabon on behalf of the African Group tabled a resolution, “Report of the Human Rights Council,” that puts HRC 24/24 in limbo and consequently leaves human rights defenders vulnerable to oppressive regimes that aim to silence them through attacks, reprisals, and intimidation. The ‘counter’ resolution was adopted yesterday by the General Assembly with a narrow margin of 94 in favor, 71 against, with 23 abstentions.
At the debate that followed, Cuba cynically stated that “the Assembly had created the Human Rights Council and therefore had full authority to review its work.” Zimbabwe also said that “the General Assembly could correct the work of the Human Rights Council.” The EU, the US, Switzerland, Norway, Costa Rica and other democracies were furious and warned of “undermining the United Nations human rights institutional architecture” and “setting a damaging precedent.”
As a result, HRC 24/24 was not adopted and, instead, is open to further consideration and scrutiny by the General Assembly’s member states or possibly the Council itself. And the 2013 work of the UN Human Rights Council was approved with the opposition of the world’s democracies.
For historians and lawyers, it may be of interest to note that this is not the first time that the GA opened up a HRC resolution. After the HRC adopted a draft Declaration on the Rights of Indigenous Peoples and recommended it to the General Assembly for adoption  (Human Rights Council resolution 1/2 of 29 June 2006), the GA decided to defer consideration and action on that draft (General Assembly resolution 61/178 of 20 December 2006), and only adopted it in September 2007 after having made several changes  (General Assembly resolution 61/295 of 13 September 2007).
This was seen by some as interference undermining the Council’s authority and the political compromises reached after lengthy negotiations. Like ECOSOC was to the old Commission on Human Rights, however, the GA’s interventions to the HRC have been rare, and for the most part it acts as a rubber stamp to the decisions submitted to it for approval by the HRC.
The U.S. delegation who spoke in the December 18 debate appeared to hint at, and contrast from, the 2006 episode by highlighting the fact the content of 24/24 did not expressly require GA action: