PRESS RELEASE
UN Watch urges reprimand from Ban Ki-moon
GENEVA, July 14 – UN Watch today called on UN Secretary-General Ban Ki-moon to reprimand a top official in Gaza who is telling reporters to interview a Norwegian doctor and radical politician who in September 2001 created a front-page scandal by openly supporting the “moral right” of Al Qaeda to perpetrate the 9/11 terrorist attacks against thousands of American civilians.

“It’s an outrage that a supposed UN relief organization — which receives tens of millions of dollars from U.S. and European taxpayers — is promoting a radical politician who has openly supported the murder of innocent American civilians,” said Hillel Neuer, Executive Director of the Geneva-based human rights group UN Watch.
“We urge UN Secretary-General Ban Ki-moon to reprimand Mr. Gunness, and to put a stop to the cynical misuse of UN relief funds to promote the Hamas terrorist agenda.” 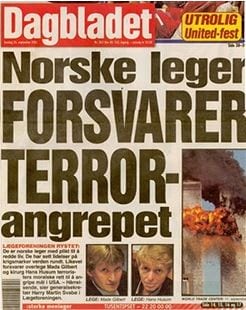 Dr. Mads Gilbert is well known in Norway as a far-left politician who, according to Norwegian news reports, openly supports “bloody” revolutions. He joined the Workers’ Communist Party (AKP), now known as the Red party, in the 1970s, and in 2009 ran as the 14th-ranked candidate on the Red party list for elections in Troms. The party calls for revolution to “disarm the bourgeoisie.”
Gilbert provoked a front-page scandal in Norway (see image at right, headlined “Norwegian doctors ADVOCATE TERROR attacks) when he expressed support for the 9/11 attacks in an interview with Norway’s Dagbladet newspaper, on September 30, 2001.
The newspaper first cited Gilbert’s support for a colleague’s pro-terrorism position:

“I advocate the moral right of the people you call terrorists to attack the United States, as a legitimate response to 25 years of wars of aggression, mines, starvation and embargo,” says surgeon Hans Husum, University Hospital of Tromsø. He is supported by physician Mads Gilbert.”

Then it quoted Gilbert himself, who made his position clear:

Dagbladet: Do you support a terrorist attack on the United States?
Gilbert: “Terror is a poor weapon, but the answer is yes, within the context I have mentioned.”

Dagbladet: You understand that this will create reactions?

Gilbert: “Yes, that’s to be expected. The white world does not understand that it is possible to see such an act in a different perspective.”

UNRWA tells reporters to interview Norwegian supporter of 9/11 terror attacks
Test yourself: Are you pro human rights, or just anti-Israel?