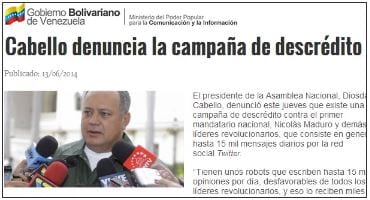 GENEVA, June 15, 2014 –  The head of the Venezuelan parliament was one of several top Caracas officials to lash out at an upcoming gathering of Venezuelan dissidents at the United Nations Human Rights Council, where the government’s violent repression of protests is expected to come under intense scrutiny.

The first-ever UN summit of Venezuelan dissidents, which will draw together ambassadors, UN officials, and rights activists, is being organized by the Geneva-based human rights group UN Watch, with the co-sponsorship of Iniciativa por Venezuela, Human Rights Foundation and Directorio.

The event will take place this Tuesday, June 17th, at the Palais des Nations headquarters of the Human Rights Council in Geneva. (To request interviews, contact UN Watch).

According to media reports, National Assembly President Diosdado Cabello accused the UN Watch event of being “part of the agenda to discredit Venezuela before international bodies.” Cabello is a former military confidante of Hugo Chavez and exercises vast power throughout the government apparatus. The Atlantic Monthly called him “the Frank Underwood of Veneuzela.”