I am here today, speaking on behalf of UN Watch, for the world to hear another Syrian—one who was arrested and tortured by this government.

My name is Ahed Alhendi, and I am a Syrian human rights activist and blogger.

Five years ago, my friends and I at Damascus University established a secular student association.  Our dream was to build a society that respects human rights and individual freedom. We were young, and we believed President Assad’s promises of reform.

Yet our dreams turned into a nightmare. Because of our democracy activism, we were arrested and tortured by Assad’s security forces. 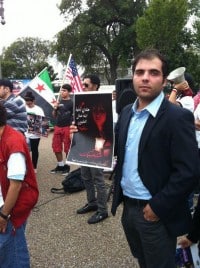 Madam President, with your permission, I shall not here describe the details of what we went through. But to all of the distinguished ambassadors gathered here today, I can say this:  I do not wish upon any of your citizens—upon any human being—to suffer forty days of isolation and torture by the Syrian authorities.

I appreciated hearing the reports just now by the deputy of Kofi Annan, and by the commission of inquiry.

But my people are continuing to be slaughtered.  Words are no longer enough.  Hoping for Assad to become a “reformer” is no longer a tenable position.

Was not the United Nations founded to stop genocide and other mass killings?

Was not the United Nations founded to protect the most basic of human rights, such as the right to life?

Why is the United Nations allowing a government to massacre its own people in broad daylight?

What was the United Nations thinking when it elected Syria to UNESCO’s human rights committee?

As we sit here in Geneva, in Syria men, women, and children are being killed. If we do not act now, for many it will be too late.