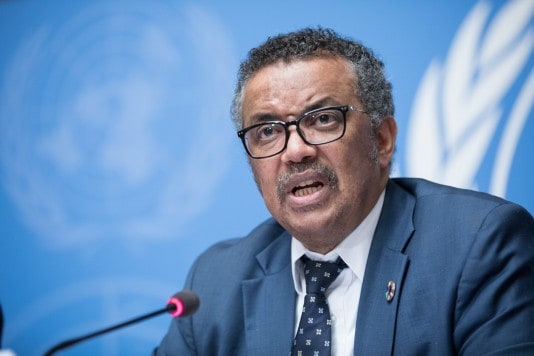 Tedros Adhanom Ghebreyesus (above), Director-General of the World Health Organization,
blames Israel for violating the health rights of Palestinians and Syrians in the Golan in a
report which was adopted by the World Health Assembly on May 22, 2019.

GENEVA, May 22, 2019 — The annual assembly of the UN’s World Health Organization today voted 96 to 11 for a resolution, co-sponsored by the Arab bloc and the Palestinian delegation, that singled out Israel over “Health conditions in the occupied Palestinian territory, including east Jerusalem, and in the occupied Syrian Golan.”
Hillel Neuer, Executive Director of UN Watch, condemned the delegates’ abuse of the UN body as a forum to target Israel.
“Out of 21 items on the meeting’s Agenda, only one—Item No. 14 against Israel—focused on a specific country. There was no agenda item or resolution on any other country, including Syria, where hospitals and medical infrastructure have suffered devastating bombings by Syrian and Russian forces; Yemen, where 19.7 million people lack access to health care service due to the current crisis; or Venezuela, where the health system has collapsed, causing millions to flee the country,” said Neuer.
“Today’s resolution is a fantastic lie. The UN reached new heights of absurdity by enacting a resolution which accuses Israel of violating the health rights of Syrians in the Golan, even as in reality Israeli hospitals provide life-saving treatment to Syrians fleeing to the Golan from the Assad regime’s barbaric attacks,” he said.
“Shame on France, Belgium and Sweden for encouraging this hijacking of the annual world health assembly, and diverting precious time, money, and resources from global health priorities, in order to wage a political prosecution of Israel, especially when, in reality, anyone who has ever walked into an Israeli hospital or clinic knows that they are providing world-class health care to thousands of Palestinian Arabs—including last week to Palestinian leader Jibril Rajoub—as well as to Syrians fleeing Assad,” Neuer added.
The vote was 96 to 11 on the resolution, with 21 abstentions and 56 absent.
Those that voted no like last year were the US, UK, Australia, Canada, Guatemala, and Israel, while those that changed their votes to no this year were Brazil, Czech Republic, Germany, Honduras and Hungary.
“Both Brazil and most recently Germany announced that they would oppose biased UN resolutions against Israel, and today they kept their promise,” said Neuer.
In addition to voting against the resolution, the US, the UK, Germany and Canada took the floor to strongly object to the politicization of the forum. Click for video
The adopted text calls for a report on a series of alleged Israeli violations, including on “the mental health of Palestinians affected by the exposure to violence and the context of chronic
occupation.”
By passing the resolution, the body also adopted a report that point the finger at Israel for increased health and mental health issues stemming from “trauma injuries and exposure to violence during the ‘Great March of Return.” The report completely ignores the leading role of Hamas and other terrorist groups in orchestrating the violent riots and deliberately encouraging demonstrators to approach the hostile area of the Gaza-Israel border.
The WHO’s report also lauded the successful training of 1600 UNRWA staff members in providing mental health services, omitting the impact of UNRWA teachers’ incitement to terrorism and violence on the mental health of Palestinian children.

Syrians suffer sarin gas attacks & barrel bombings on hospitals; 19.7 million Yemenis have no health care due to war; in Venezuela, the health system has totally collapsed.

Yet today the @WHO found time at its annual meeting to condemn 1 country: Israel.https://t.co/kTkq6Kibvq