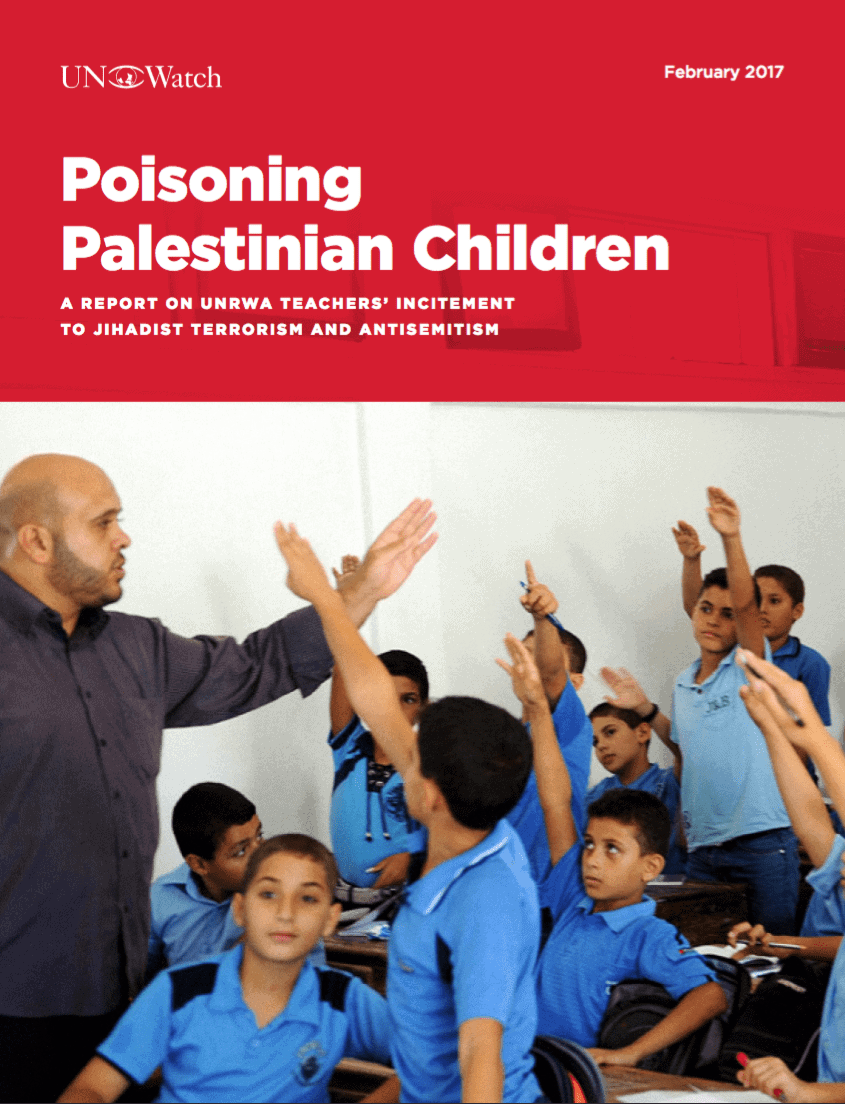 A REPORT ON UNRWA TEACHERS’ INCITEMENT
TO JIHADIST TERRORISM AND ANTISEMITISM

Joint Hearing of the
Subcommitee on Middle East and North Africa and the
Subcommittee on Africa, Global Health, Global Human Rights,
and International Organization

This report exposes more than 40 Facebook pages operated by school teachers, principals, and other employees of the United Nations Relief and Works Agency for Palestine Refugees in the Near East (UNRWA), which incite to terrorism or antisemitism. The report is divided by region, and includes UNRWA staffers in Lebanon, Jordan, Gaza and Syria. These cases are additional to the 30 cases of incitement revealed at the end of 2015 by UN Watch.
The examples of incitement in this report include UNRWA teachers and staffers celebrating the terrorist kidnapping of Israeli teenagers, cheering rockets being fired at Israeli civilian centers, endorsing various forms of violence, erasing Israel from the map, praising Hitler and posting his photo, and posting overtly antisemitic videos, caricatures, and statements.

Incitement as Symptom of Core Problem
It is essential to understand that the hatred on display within UNRWA is a symptom of a deeper, underlying problem: the very existence of the organization, its structure and operations, and core political mission. As noted by Dr. Einat Wilf, the world’s leading expert on UNRWA, the agency functions as a political Palestinian organization committed to the political program of “return,” which means sending five million descendants of 1948 Palestinian refugees into Israel, effectively ending the Jewish state as we know it. Rather than nurturing the possibility of peace, Dr. Wilf has shown, UNRWA is currently the greatest obstacle to peace, as it institutionalizes, perpetuates, and inflates the Palestinian refugee issue and the dream of Palestinian “return” to what is the State of Israel.

U.S., UK, EU and Other Top Donors Must Act
UNRWA’s major donors include the U.S., which gave $380 million in 2015, the EU ($136 million), and the UK ($100 million). These and other donor states, including Canada which recently announced a new $25 million grant, bear a responsibility to ensure that UNRWA lives up to its obligations as a UN humanitarian organization.
Regrettably, when we exposed 30 similar cases of online incitement last year, the response of UNRWA spokesman Chris Gunness was to lash out at UN Watch, and to deny or downplay the problem. Only after months of sustained media attention did the UN spokesman in New York announce quietly that a few employees had been suspended. The identities of the perpetrators, or the duration of their suspensions, were never disclosed. UNRWA itself has never issued any statement on the matter, neither on its website or elsewhere.
That so many UNRWA employees continue to publicly display Facebook posts which celebrate radical Islamic terrorism and incite antisemitism demonstrates that UNRWA—despite its claims to have established disciplinary systems—is failing to take the issue seriously, and that its employees know that.
Likewise, the senior UNRWA echelon’s daily political advocacy targeting Israel—an anomalous practice and breach of neutrality among humanitarian agencies worldwide—creates an overall atmosphere in the organization where teachers clearly feel comfortable erasing the Jewish state from the map.

Legal Violations
The incitement by UNRWA employees constitutes a violation of their legal obligations:

UNRWA’s 2017 funding agreement with the U.S. State Department obliges it to act in accordance with “UN humanitarian principles of neutrality and impartiality.” Under general UN principles, UN humanitarian actors have a duty not to take sides in hostilities or engage in controversies of a political, racial, religious or ideological nature.
The incendiary Facebook posts by UNRWA personnel supporting, glorifying and legitimizing murderous anti-Israel terrorism is a gross violation of this duty of neutrality. These UN employees are openly taking sides in the Israeli-Palestinian conflict and engaging in political, racial, religious or ideological controversies.

UNRWA’s agreement with the U.S. obliges it to reject “racism in all forms.” Yet UNRWA teachers and principals are in gross violation of this obligation by posting classically antisemitic posts on Facebook.

Under its agreement with the U.S., and in pledges made to Canada that were announced in November, UNRWA must implement e-training on UNRWA’s policy on social media use by UNRWA personnel. UNRWA is in glaring breach of this provision. Based on today’s UN Watch report, it is clear that if UNRWA has taken any actions in this regard, they have been an utter failure.
Furthermore, UNRWA’s e-training obligation is supposed to be implemented in connection with its broader obligation to comply with Section 301(c) of the U.S. Foreign Assistance Act of 1961 (see, Section III, p. 2), pursuant to which UNRWA must ensure the United States that its contributions are not going to assist persons who are involved in terrorism. The fact that UNRWA personnel are actively inciting, glorifying and honoring terrorists on their Facebook profiles calls into question whether UNRWA is in fact in compliance with FAA Section 301(c).

Under its agreement with the U.S., UNRWA must take “clear and consistent . . . disciplinary action” against its personnel who violate UNRWA’s regulatory framework. (See, Section III, p. 3).
In response to UN Watch’s reports from last year, UNRWA claimed that it took disciplinary action against some of its personnel in the form of suspensions and loss of pay. However, UNRWA did not identify the employees subjected to disciplinary proceedings or state the length of the suspensions. In any event, whatever disciplinary action UNRWA took plainly was not effective—today’s UN Watch report shows that the conduct is continuing unabated throughout UNRWA’s facilities across the Middle East.
The U.S., the EU, the UK and Canada must demand that UNRWA employ a zero tolerance policy for this type of incendiary Facebook activity by its employees, just like that applied to teachers in the U.S. and the UK. In November 2016, the Oberlin College Board of Trustees dismissed an assistant professor for anti-Semitic Facebook posts. Similarly, in October 2015, the UK government banned a teacher from the classroom for life over an anti-Semitic Facebook post. Palestinian students deserve the same rights that UNRWA’s donors grant their own.

In addition to these flagrant breaches of the 2017 funding agreement, UNRWA is also in violation of UN and UNRWA internal policies concerning staff neutrality and impartiality.
Article 101(3) of the UN Charter states that the “paramount consideration” in employing staff is “securing the highest standards of efficiency, competence and integrity.” The quality of “integrity” is central to the UN Staff Rules and Staff Regulations, which require staff members to “uphold the highest standards of . . . integrity.” This includes, but is not limited to, “probity, impartiality, fairness, honesty and truthfulness in all matters affecting their work and status.” See Regulation 1.2(b). This value is again reflected in Rule 1.2(f) requiring staff to remain neutral and impartial, especially with respect to public pronouncements.
Moreover, UNRWA’s own International Staff Regulations expressly incorporate this UN “neutrality rule” for its staff, stating in Regulation 1.4 that staff must “avoid any action and in particular any kind of public pronouncement which may adversely reflect on their status or integrity, independence or impartiality which are required by that status.”
The UNRWA staff Facebook posts exposed by UN Watch today and last year reflect a brazen flouting of these UN and UNRWA regulations.

Recommendations and Call to Action
In light of the foregoing, UN Watch urges all donor states—and in particular the U.S., the EU, the UK and Canada—to:
(a) Demand that UNRWA be in full compliance with its obligations, including each of the provisions outlined above, prior to donor states releasing any further funds to UNRWA;
(b) Demand that UN Secretary-General António Guterres and UNRWA Commissioner-General Pierre Krähenbühl immediately condemn their employees’ incitement to terrorism and antisemitism; and
(c) Demand that UNRWA adopt a zero tolerance policy for employees who incite racism or murder by immediately terminating them, and prominently post on its website these and other actions it is taking to root out this insidious conduct by UN staff.