US, EU Must End “Deafening Silence” on Abusers’ Election to UNHRC 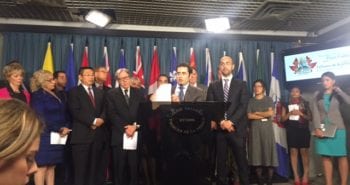 GENEVA, October 27, 2016 – As the U.N. prepares to elect 14 nations tomorrow to its highest human rights body, UN Watch urged U.S. Ambassador Samantha Power and her UK, French, German and other EU allies to end their “deafening silence” on the candidacies of non-democracies, despite repeated pleas over the past month for them to speak out.

A 21-page joint NGO report was published by UN Watch, Human Rights Foundation and the Raoul Wallenberg Center for Human Rights. The findings were that China, Cuba, Russia, Saudi Arabia, Egypt, Iraq, Malaysia and Rwanda, are “Not Qualified” under the U.N.’s own membership criteria.

The qualifications of Guatemala, South Africa and Tunisia were deemed “questionable” based on problematic human right records or in their UN voting records.

“Sadly, all signs are that the UN will disregard its own rules and principles by electing China, Cuba, Russia, and Saudi Arabia — even though they systematically violate the human rights of their own citizens,” said UN Watch executive director Hillel Neuer, “and they consistently vote the wrong way on UN initiatives to protect the human rights of others.”
“For the UN to elect Saudi Arabia as a world judge on human rights would be like a town making a pyromaniac into chief of the fire department,” said Neuer.
UN Watch is proposing two major reforms to the election system:

UN Watch has been leading the campaign this year with a coalition of NGOs to oppose the re-election of Saudi Arabia, Russia, China and Cuba, as well as the new election bids of Egypt, Iraq, Malaysia and Rwanda, by lobbying governments, and through online petitions, high profile parliamentary events, UN press conferences, university lectures, YouTube videos, and op-eds in the Washington Post and other major newspapers.
“Regrettably,” said Neuer, “neither the U.S. nor the EU has said a word about hypocritical candidacies that only undermine the credibility and effectiveness of the UN human rights system. By turning a blind eye as human rights violators easily join and subvert the council, leading democracies will be complicit in the world body’s moral decline.”
“It will be an insult to their political prisoners and many other victims — and a defeat for the global cause of human rights — if the UN helps gross abusers act as champions and global judges of human rights. When the U.N.’s highest human rights body becomes a case of the foxes guarding the henhouse, the world’s victims suffer,” said Neuer.
Click here for PDF of the full report.
*********
KEY RESOURCES
Following are key campaign resources for activists and journalists:
Report on Candidates
Click here for the report, by UN Watch, Human Rights Foundation and the Raoul Wallenberg Centre for Human Rights, analyzing which candidates should be rejected.
Absurd Pledges by Dictatorships
Dictatorships have published and submitted to the UN absurd claims about their human rights record, which have been analyzed and exposed by UN Watch:

Click here to see more of UN Watch’s latest blog posts on all aspects of the 2016 UNHRC elections.
Photos
Click here for hi-res images from UN Watch events held with Human Rights Foundation and others.