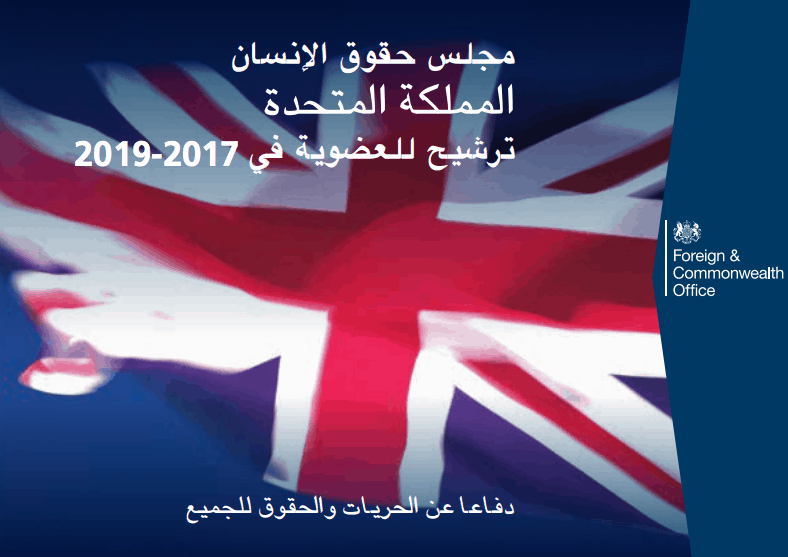 Cover of UK’s glossy Arabic brochure sent by London to Arab dictatorships ahead of Friday’s election,
to win their votes—possibly in deals whereby the UK will vote for them. Translation: “UN Human Rights
Council | UNITED KINGDOM | 2017 – 2019 candidate | For freedoms and universal rights”

Is this glossy Arabic brochure produced by London’s Foreign Office another indication that the UK is—once again—making a Faustian bargain with the medieval and misogynistic Saudi monarchy to vote each other onto the UN’s highest human rights body, in elections to be held in New York this Friday?

UN Watch has been leading the campaign this year with a coalition of NGOs to oppose the re-election of Saudi Arabia, Russia, China and Cuba, as well as the new election bids of Egypt, Iraq, Malaysia and Rwanda, by lobbying governments, and through online petitions, high profile parliamentary events, UN press conferences, university lectures, YouTube videos, and op-eds in the Washington Post and other major newspapers.
in a joint investigation with The Australian, revealed last year that the mother of constitutionalism entered negotiations in 2013 with one of the world’s worst human rights violators to exchange votes for UN Human Rights Council seats. Both countries are running again, for re-election to 2017-2019 terms.

Given Prime Minister Theresa May’s refusal today to disavow a repeat pact with the theocratic Saudis, there is good reason to suspect the brochure is part of a larger arc of squalid deals with regimes that trample women’s rights and religious freedom.
The vote-trading for UN Human Rights Council seats is so cynical that the Saudis even made deals with enemies like Russia, whose media savage the Saudis at every opportunity. Amusingly, Russian-controlled media like Sputnik have pounced on Saudi Arabia’s absurd membership on the UNHRC — even as their Kremlin paymaster helped elect Riyadh.

In response to a recent question in the House of Lords by Baroness Deech, the British Foreign Office, while refusing to confirm the vote trades, protested that even if they did vote for the oppressive regime in 2013, “Saudi Arabia did not need our support in the last election to the Human Rights Council since they were uncontested.”

This is false and misleading.

First, Saudi Arabia’s bid was not always uncontested; competitor countries in their regional group dropped out of the race — quite possibly after seeing how many pledges the Saudis had accumulated, or bought.

Second, even uncontested candidates must get a majority of 97 UNGA votes. In 2013, the Saudis received 140 votes. If the UK and another 43 countries had declined to support the desert despotism, it would not have been elected.

Third, and most importantly, the issue is not merely a matter of whether the UK’s possible Yes vote clinched the Saudi win or not.
Rather, it reveals the UN’s utter failure when it comes to human rights — and a questionable commitment in the Foreign Office to the effectiveness of the UNHRC — that the UK would think it anything other than obscene to vote to elect to the world’s highest human rights body one of the world’s most egregious violators of every universal human right.