1. “Committee on the Exercise of the Inalienable Rights of the Palestinian People” [A/73/L.31]

Extract: “Noting with deep regret the passage of 51 years since the onset of the Israeli occupation and over 70 years since the adoption of resolution 181 (II) on 29 November 1947 and the Nakba without tangible progress towards a peaceful solution…”

Analysis: Biased committee is one of the veteran pillars of the UN’s anti-Israel infrastructure. It is the only GA human rights committee devoted to a single cause. Its reports systematically turn a blind eye to Palestinian terrorism against Israeli civilians. Committee’s mandate concerns Israeli actions only and is inherently prejudiced and one-sided. 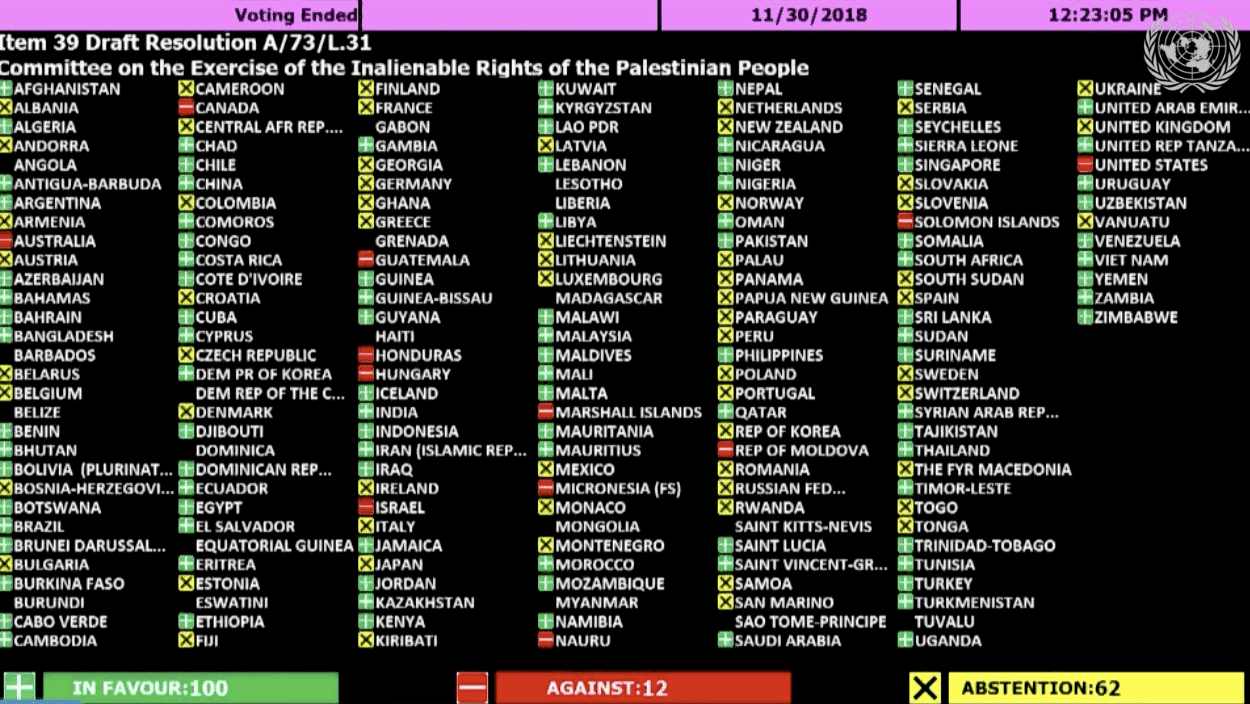 Extract: “Requests the Division, in particular, to continue to monitor developments relevant to the question of Palestine, to organize international meetings and activities in support of the Committee’s mandate … to liaise and cooperate with civil society and parliamentarians, including through the Working Group of the Committee and its associated ‘UN Platform for Palestine’, to develop and expand the ‘Question of Palestine’ website…”

Analysis: The DPR serves the biased special committee and is dedicated to spreading anti-Israel propaganda the world over. Its 16-member staff is grossly disproportionate to the UN’s other four divisions which cover enormous geographical regions. The DPR’s work is counter-productive to the peace process and seeks to coordinate international boycotts against Israel instead of seeking bridges for peace. Excludes from its events any NGO that declines to swear fealty to its hardline politics. 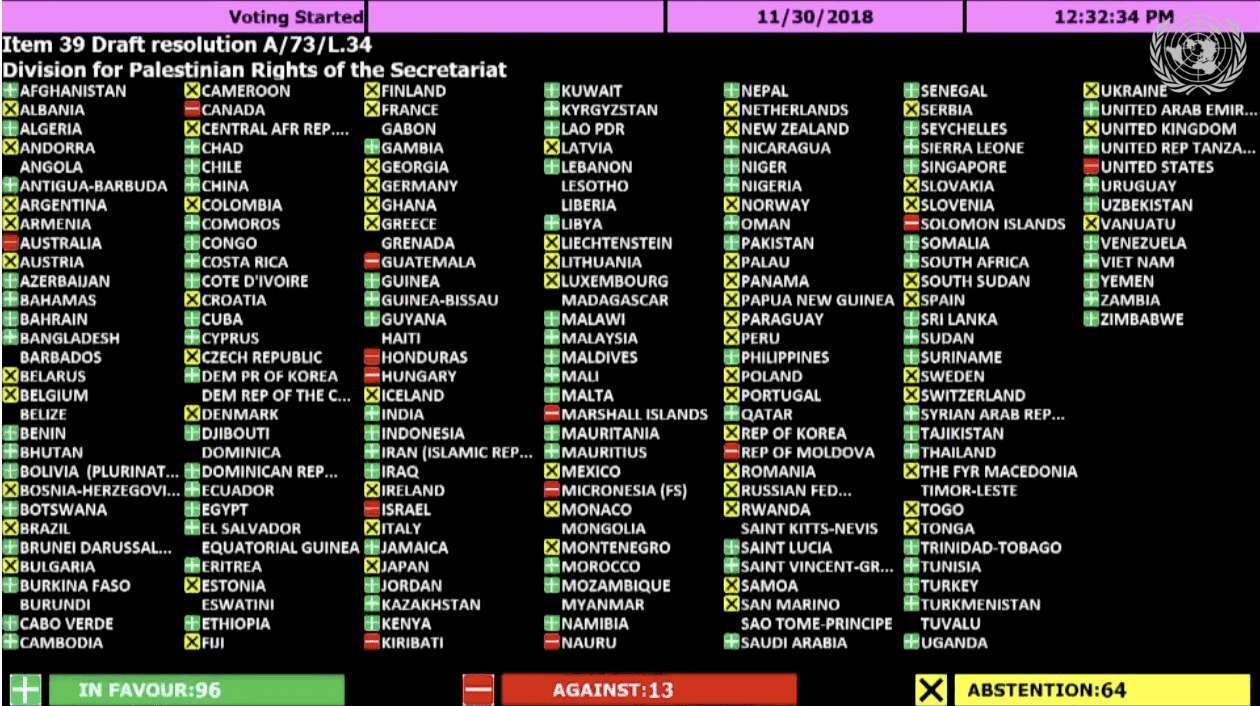 3. “Special information program on the question of Palestine of the Department of Public Information of the Secretariat” [A/73/L.33]

Extract: “Recalling the advisory opinion rendered on 9 July 2004 by the International Court of Justice on the legal consequences of the construction of a wall in the Occupied Palestinian Territory…”

Analysis: The program is one more example of how the neutral UN secretariat is forcibly co-opted by the anti-Israeli forces at the UN. The program eschews a balanced approach by overtly choosing the Palestinian over Israeli narrative, ignoring terrorism against Israeli men, women and children, and other daily realities of Israeli life. Resources devoted to anti-Israel propaganda are taken away from other worthy causes. 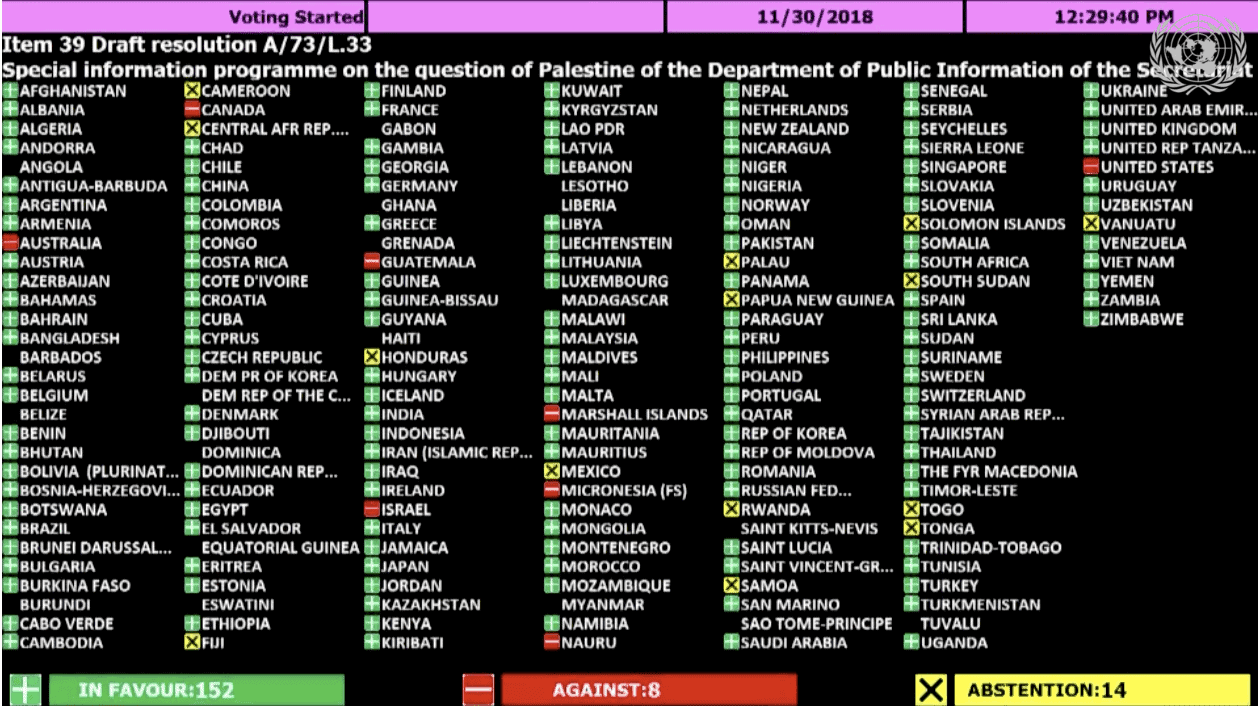 Extract: “Expressing grave concern about tensions, provocations and incitement regarding the holy places of Jerusalem, including the Haram al-Sharif, and urging restraint and respect for the sanctity of the holy sites by all sides…”

Analysis: Blames Israel only for lack of peace. Expresses “deep concern” that over 70 years have passed since the 1947 partition plan, suggesting Israel is at fault when it was the Arab states and Palestinian Arab leaders who uniformly rejected that resolution and initiated hostilities the day after its adoption. Text is redundant to several other resolutions and serves no effect other than demonization. References to terror fail to name its perpetrators, whereas Israel is named and blamed throughout. Uses only the Islamic term “Haram al-Sharif” when referring to Jerusalem’s Temple Mount, ignoring Jewish and Christian religion and history. 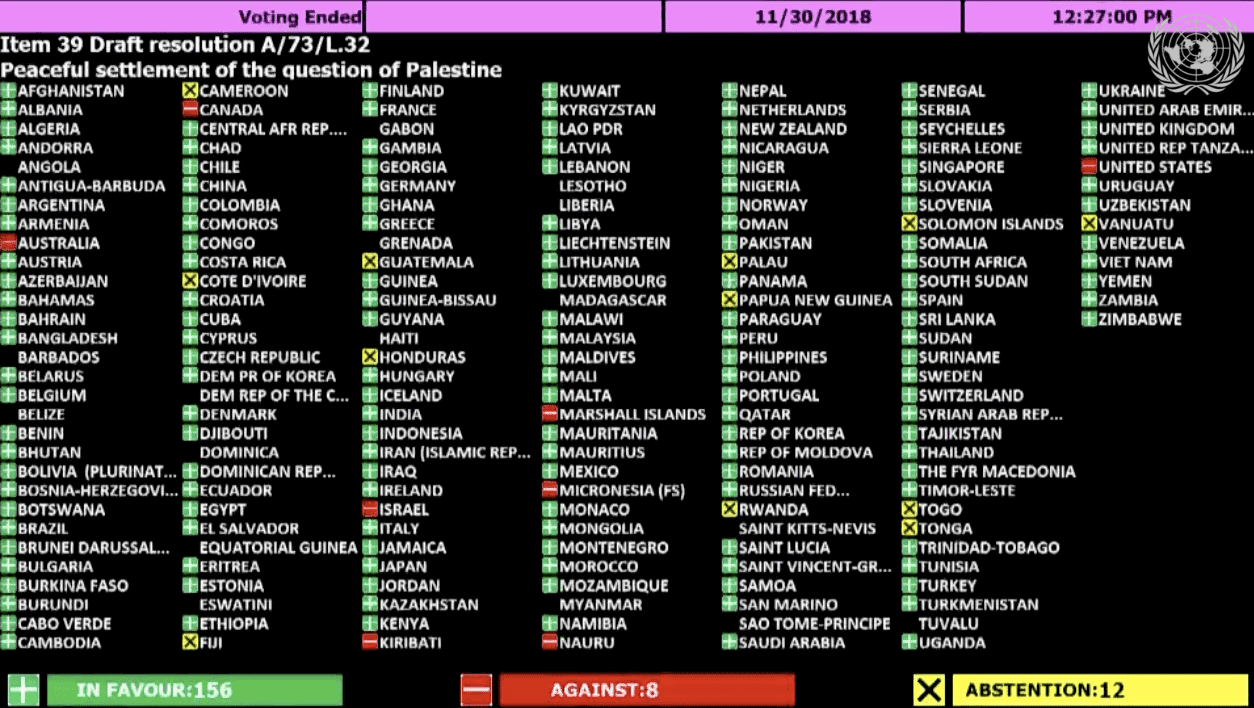 Extract: “Expressing its grave concern, in particular, about tensions, provocations and incitement regarding the holy places of Jerusalem, including the Haram al-Sharif, and urging restraint and respect for the sanctity of the holy sites by all sides…”

Analysis: Implies that Israeli administration of Jerusalem hinders freedom of religion when in fact the opposite is true—before 1967, Jordan destroyed Jewish holy sites and denied access to Jews, while under Israel all faiths have access to the city and enjoy full freedoms. Uses of uniformly harsh language against Israel that is not used even against regimes like Iran. Repeated passage of annual resolution to address acts from 1980, or matters already covered in other similar resolutions, serve no purpose other than demonization. Uses only the Islamic term “Haram al-Sharif” to describe Jerusalem’s Temple Mount, ignoring Jewish and Christian religion and history. 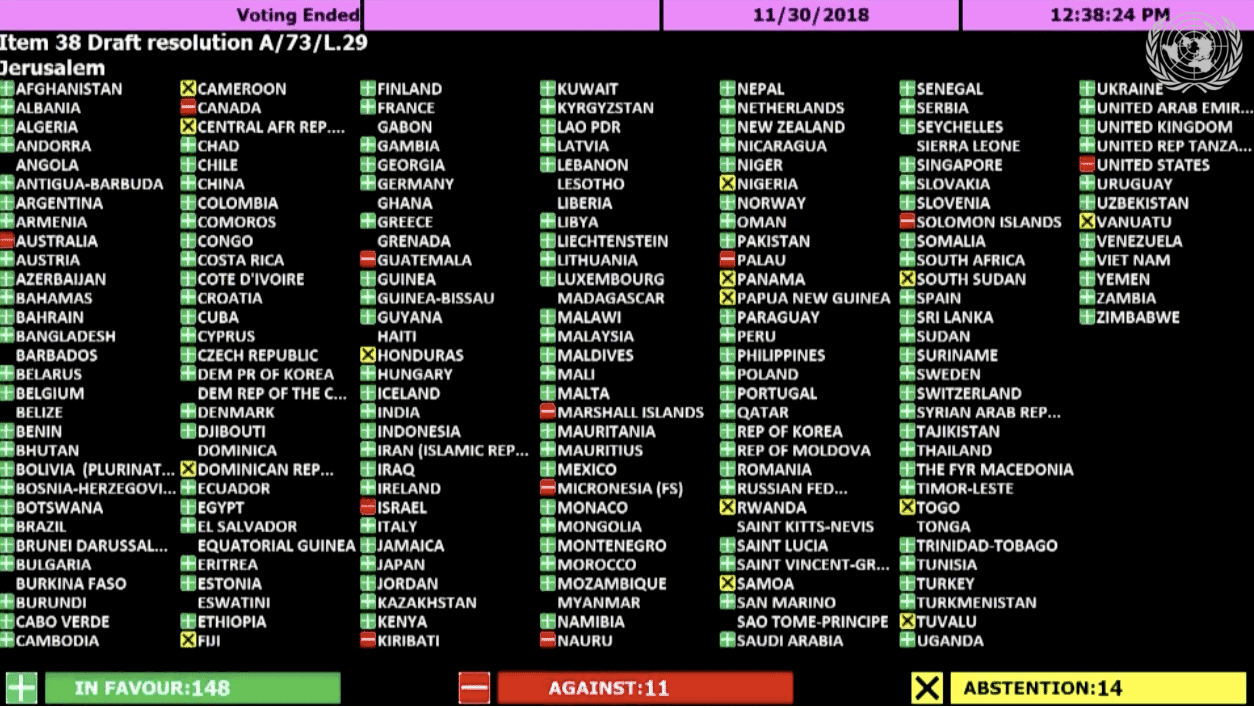 Extract: “Deeply concerned that Israel has not withdrawn from the Syrian Golan, which has been under occupation since 1967…”

Analysis: Redundant to A/C.4/73/L.22 on “the Occupied Syrian Golan.” Oblivious to genocidal massacres taking place now in Syria and its security implications for Israel and the civilians of the Golan Heights. Ignores Syria’s history of shelling Israeli communities, its leader’s calls for a “war of annihilation” against Israel, and Syria’s 1967 aggression that led to its loss of the territory. 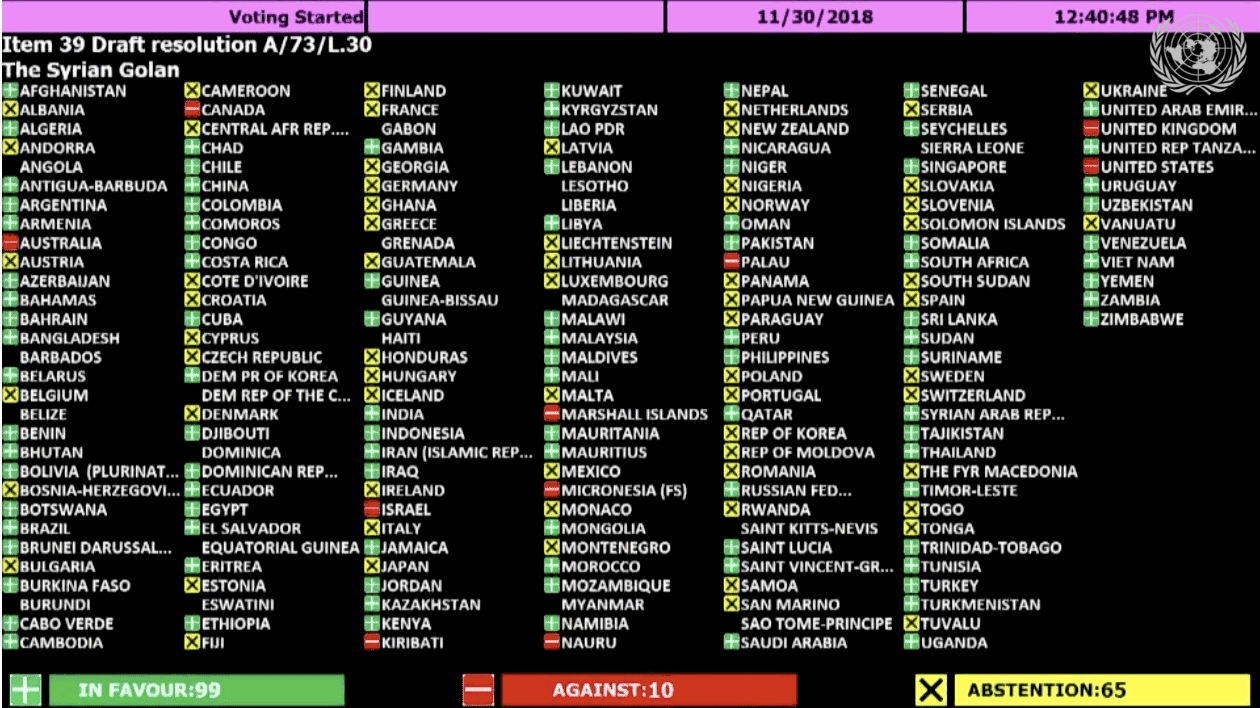 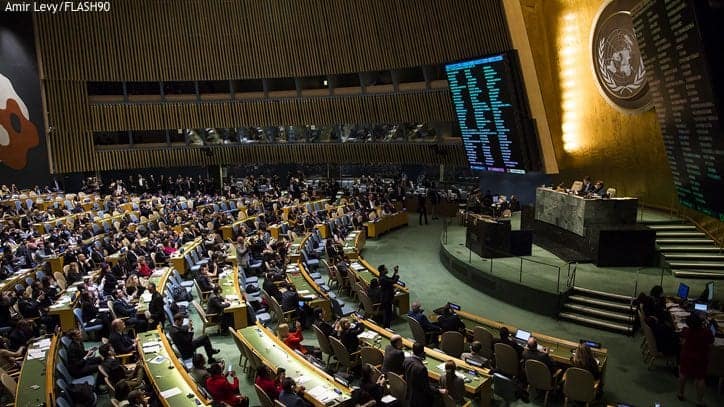