“Allying with Stalin to stop Hitler is different than saying Stalin is a human rights champion!” 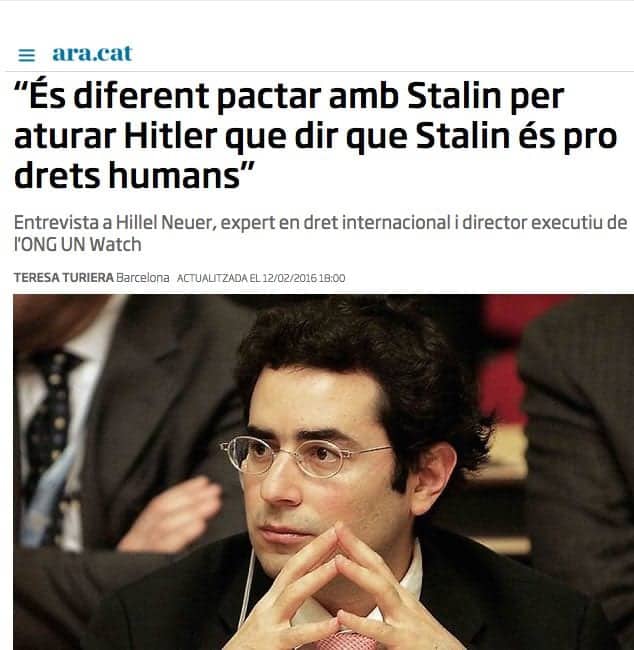 Translated from the original article, in Catalan, from Barcelona’s ARA newspaper.

“Making an alliance with Stalin to stop Hitler is one thing; it’s quite another to say Stalin is a champion of human rights!”
Interview with Hillel Neuer, an expert in international law and executive director of the NGO UN Watch
Diari ARA, World section
Interview by Teresa Turiera
Head of the non-governmental organization UN Watch, based in Geneva, the lawyer and activist Hillel Neuer works to monitor compliance with human rights in the world and exposes the perverse relationships and the double yardstick applied by many countries in the UN by dictatorial or authoritarian regimes that systematically violate the Universal Declaration of Human Rights.
NEUER: “Within the UN, Saudi Arabia is an influential member of the Arab Group, and is headquarters of the Islamic group, which has 56 countries as members. When the Saudis call on Secretary General Ban Ki-moon, he pays attention. In addition, Saudi Arabia has huge reserves of oil and money, so this country not only has influence on the UN but on many of its member states, which in turn put pressure on their behalf.”
ARA: Can you cite a recent example?
NEUER: “In 2013 Saudi Arabia was elected in a secret ballot by more than 100 countries as one of the 47 representatives that make up the UN Human Rights Council, an organization that claims to promote and protect the rights the human world.”
ARA: Why did these countries vote in favor if there are notorious human rights violations in Saudi Arabia?
NEUER: “Because they want Saudi oil and investment money, and for Saudi Arabia to buy their products. Thanks to official confidential emails made public by Wikileaks, six months ago UN Watch revealed that Saudis secretly negotiated an exchange of votes: the United Kingdom would vote for the Saudis to become a member of the Human Rights Council, and the Saudis would vote for the UK.
ARA: But this is a flagrant contradiction…
NEUER: “We are talking about a country where women are treated as second-class citizens; where there is no freedom of worship; if you are not a Sunni Muslim Wahhabi, you are persecuted, and if you’re a Christian or Jew can not practice your religion even in private. Prisoners were executed or condemned to torture just for asking for democratic freedoms.”
“Saudi Arabia is one of the worst violators of the Universal Declaration of Human Rights, yet the UK—the mother of constitutionalism and of parliamentary democracy—not only facilitated the Saudis’ election as members of the UN’s highest humn rights body, but also allowed the Saudis to become Chair of the UNHRC panel that evaluates and selects candidates to be UN human rights experts. What a mockery! For me, this was the most embarrassing moment for European democracy at the UN.
ARA: And the British government justified it?
NEUER: “In a TV interview, British prime minister David Cameron did not deny this alleged secret pact, saying the UK and Saudi Arabia had important security relations. But having a relationship with a country on security issues does not mean that you reward them with a place in the UN Human Rights Council!”
ARA: How can we break this vicious circle between economic interests and human rights? Is there hope?
NEUER: “Yes, there is hope, but it involves a lot of work on our part. If we remain silent citizens, it will continue this way. We must make our voice heard and say, ‘as a European, British, or Spanish citizen, I’m ashamed of my country for this immoral approach on human rights.’ In the UK the revelation of the UK-Saudi pact was a scandal, many MPs condemned it and demanded an investigation, and I hope to continue that pressure. Citizens must speak out and denounce it.”
“It it one thing is to have strategic relations with a country, and quite another to reward a dictatorship or ignore flagrant violations of human rights. There is a difference between saying we need to make an alliance with Stalin to stop Hitler, and declaring that Stalin is a champion of human rights!”
ARA: Most countries maintain economic and political relations with authoritarian or dictatorial regimes …
NEUER: “Yes, but that does not mean that you cannot be critical when these states violate the fundamental rights on which the UN is based. Our governments should be more courageous, including with Saudi Arabia.
ARA: What have you learned over the years to denounce the violation of human rights in the world?
NEUER: “On the one hand, I’ve seen the worst regimes, such as China, Putin’s Russia, Cuba, Venezuela, countries that have many political prisoners, elected each year to the Human Rights Council. This makes us pessimistic. But on the other hand we see encouraging actions such as the European Parliament granting the Sakharov prize for freedom of conscience to Saudi blogger Raif Badawi.”
“At our upcoming Feb. 23rd Geneva Summit for Human Rights and Democracy, organized by more than 20 human rights NGOs, we will be hearing from the Nelson Mandelas of the world — human rights heroes from Venezuela, Cuba, Iran, China… people who have spent years in prison for defending civil rights. And it is they who inspire us and show us that change is possible. It is difficult, but we know that with determination and hope, the dream that these courageous dissidents can become the new presidents of their countries will one day become reality, as happened with Mandela, Havel, and others.”

PrevPrevious10 Simple Questions for Ban Ki-moon as he visits Canada
NextIssue 575: “Allying with Stalin to stop Hitler is different than saying Stalin is a human rights champion!”Next