Following are the remarks of Antonietta Ledezma, a 24-year-old Venezuelan human rights activist, in accepting UN Watch’s 2016 Watch Morris B. Abram Human Rights Award on behalf of her father, Antonio Ledezma, the mayor of Caracas and now a political prisoner, May 31, 2016. The Geneva ceremony was attended by senior diplomats of the United Nations Human Rights Council. At bottom see also UN Watch’s award presentation video and text.

I feel extremely honored to be here tonight in representation of my father, Antonio Ledemza, and in representation of our brave political prisoners in Venezuela. Thank you, UN Watch. Thank you, Hillel. You have become the voice of hundreds of Veneuzelans, including my father, who feel completely silenced in our country.
Last time, when I had the opportunity to speak at the Geneva Summit, I spoke on behalf of 77 political prisoners. Tonight, I am speaking on behalf of 96. 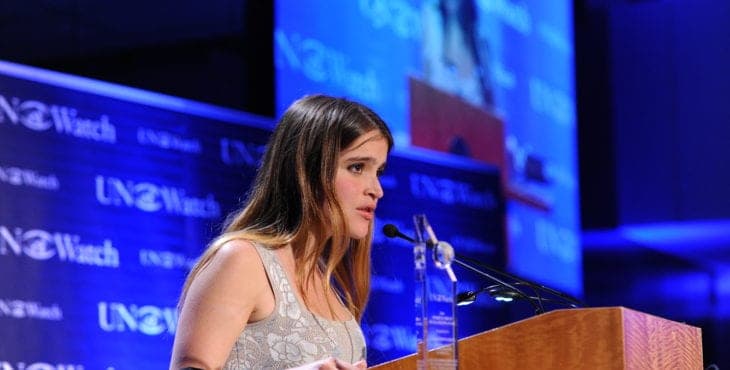 Sadly, this is a number that keeps increasing in my country because our legal system is used as a weapon to intimidate, to threaten, and to instill fear in everyone who’s there to speak against this tyranny that has been destroying my country for 18 years. I am 24 years old and I don’t know anything different than this regime.
Tonight, I don’t want to only speak about that politician that you saw there on the video. I want to also speak about a loving father, a loving husband, a loving friend, and about the bravest man I’ve ever known, that I have the privilege to call father. I want to also share with you how my life, how my family’s life, including my sister who is with me here tonight, changed in a very abrupt way a year and three months ago.
A hundred and twenty police men came to my father’s office. They showed up and smashed into his office withot a warrant for his arrest, without giving any sort of explanation as to why were they taking him, what were the reasons of his arrest, of his kidnapping. And for the longest nine hours of my life, for the longest nine hours of my family’s life, we went through the psychological terror of not knowing if my father was alive, of not knowing what was happening and if he was being tortured.
It wasn’t until the late hours of the night that the president, the dictator, Nicolas Maduro, came up on national TV and said that my father was being charged for conspiring a coup against his government—something that even today, we don’t have one piece of proof that can prove that this is truth or not.
He had his hearing a year after his arrest. A hearing that was supposed to happen 45 days after his arrest, it happened a year after. And in this hearing, the public prosecutor and the judge are trying to give my father two charges: conspiracy and criminal association. Both charges can land him in jail for 26 years.
I remember that day I felt desperate. Anyone who has a father can imagine the desperation of imagining my father ending up his life in jail. I hugged him and I cried to him desperately and I asked him if he was scared, and what was our next move. So he hugged me back and he told me that the only fear he had was imagining to lose Venezuela to this dictatorship.
So this is Antonio Ledezma. This is my father. He is today the only mayor of the world who was elected and reelected by almost 100,000 voters who was illegally arrested. He is the second civil authority of my country. And with this, I am not trying to make him sound more or less important than our other political prisoners. With this, I want you all to imagine the vulnerability that we are feeling as Venezuelans. When something like this can happen to a mayor, imagine what can happen to the rest of us.
Seeing my father in jail has been definitely the hardest and the most painful experience that I’ve been through in my life. But his strength and his courage has made me see things from a different perspective. Not everyone has the privilege that I have to say that I have a father who gave up his freedom so tomorrow I can have a free country.
I want to conclude with saying something that I’ve been asking to myself. Why is a country like Venezuela still a part of the UN Human Rights Council? Why, in a country where human rights mean nothing? Why, when children are dying at hospitals every day due to the lack of medicines? Why, when we are going through the worst political and social humanitarian crisis that we’ve ever lived through in our history? And why, when stories like my father’s are still happening?

The prize is named after the late founder of UN Watch, who created the organization in 1993, following his term as U.S. Ambassador to the United Nations in Geneva.

Ambassador Abram was a pioneering civil rights lawyer who marched arm-in-arm with Martin Luther King, establishing the principle in American law of “One Man, One Vote.” For five decades, he was at the center of human rights activism in America, and at the United Nations.

This year’s recipient exemplifies the legacy of Ambassador Abram.

Antonio Ledezma was elected Mayor of metropolitan Caracas, Venezuela, in 2008, defeating the Socialist candidate favored by Hugo Chavez. The Chavez regime responded by taking away the funding and powers of the mayor’s office, and by creating a rival position run by a Socialist party member.

Despite the obstacles, Mayor Ledezma persevered in addressing the needs of the people of Caracas, promoting programs to provide a solution to citizens’ problems.

Working with other cities around the world, he developed impressive projects such as the Caracas Metropolitan Strategic Plan for 2020, Smart Traffic Lights, and the Transmetrópoli. Mayor Ledezma knocked on doors around the world to achieve ideas that would turn Caracas into a City for Life.

On July 3, 2009, the mayor went on a hunger strike, in defense of his employees’ salaries, which were taken away by the Chavez regime, and for the freedom of others who had been arrested for demanding the same.

Mayor Ledezma has been one of the most vocal critics of the ruling party, now headed by President Nicolas Maduro.

For all of this, Venezuelan police came to arrest Mayor Ledezma last year in a violent raid on his office. Based on trumped-up charges, he is now a political prisoner facing up to 26 years in jail.