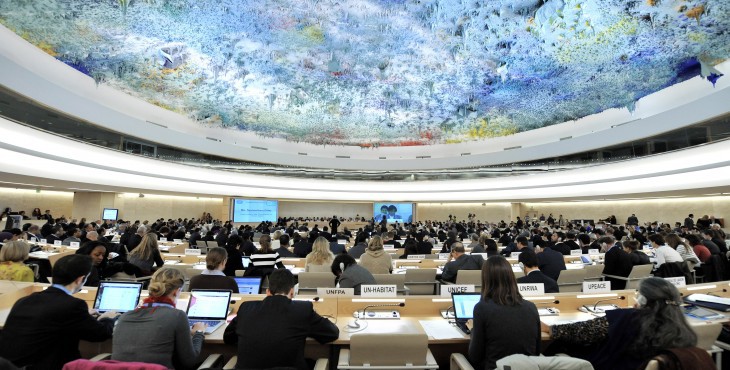 GENEVA, June 10, 2016 — UN Watch, a Geneva-based non-governmental human rights organization, today called on UN Secretary General Ban Ki-moon, UN human rights high commissioner Zeid Ra’ad Zeid Al-Hussein, U.S. Ambassador Samantha Power and EU foreign affairs commissioner Federica Mogherini to endorse an appeal to all 47 member states of the UN Human Rights Council to issue an amnesty to release their political prisoners on the occasion of the Council’s 10th anniversary, which is being celebrated in Geneva at a high level ceremony with the participation of all past presidents of the Council.

The appeal will be read out next week on the floor of the Council, along with the names of 50 representatives of political prisoners and human rights organizations.

13 June 2016
Whereas the United Nations Human Rights Council is today celebrating the 10th anniversary of its creation with a high level panel of all former presidents, and through other public events this week in Geneva,
Whereas the founding charter of the Council, contained in UNGA Resolution 60/251 of 2006, reaffirmed that all States, regardless of their political, economic and cultural systems, have the duty to promote and protect all human rights and fundamental freedoms,
Whereas the Universal Declaration of Human Rights guarantees that no one shall be subjected to arbitrary arrest, detention or exile, and the International Covenant on Civil and Political Rights provides that no one shall be deprived of his liberty except on such grounds and in accordance with such procedure as are established by law,
Whereas Member States of of the Council have solemnly undertaken, under Resolution 60/251, to uphold the highest standards in the promotion and protection of human rights, and to fully cooperate with the Council and its mechanisms, which includes the Working Group on Arbitrary Detention, which has repeatedly called for the release of all political prisoners,
Whereas, in breach of these obligations, numerous Member States of the Council continue to arbitrarily imprison human rights defenders, journalists, dissidents, bloggers, and democracy activists, who are detained under criminal or administrative charges as a way to impair the exercise of their basic human rights and fundamental freedoms, and to silence them,
We, therefore, appeal to all Member States of the Council to honor their obligations and commitments, and, on the occasion of the 10th anniversary of the Council, to issue an amnesty and release all political prisoners forthwith.
PrevPreviousUN rights council to celebrate 10th anniversary with all past presidents
NextUN opens $22 million "Emirates Hall" as Gulf petrodollars buy influenceNext