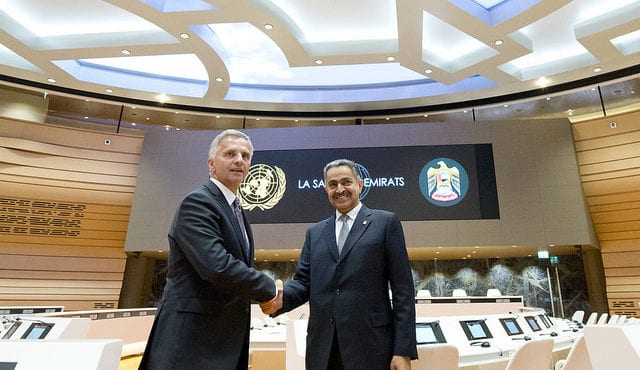 Days after UN chief Ban Ki-moon admitted that he dropped Saudi Arabia from his list of child-killing countries in exchange for the Saudis and their allies not to pull hundreds of millions of dollars in UN donations, the UN in Geneva today inaugurated an extravagant $22 million “Emirates Hall” with money from the oil-rich United Arab Emirates, an authoritarian monarchy. (See UN announcement below.)

It’s unclear whether the $22 million gift is related to the UAE’s recent election to the UN Human Rights Council, a body that meets two floors above the new room, which has a ceiling that changes colors and level of light according to the time of the day.

Delegates who meet in the luxurious chamber will now be able to “focus on finding solutions—under the blue Emirates sky—to the world’s problems that are being addressed here in Geneva,” says the UN.

UN Watch vigorously but unsuccessfully opposed UAE’s bid for a seat on the UNHRC.

Michael Møller, Director-General of the United Nations Office at Geneva, in his welcoming remarks, said that “La Salle des Emirats” combines functionality, cutting-edge technology and a design that merges innovation and cultural heritage, very much in line with the spectacular architectural trends that have emerged in the United Arab Emirates over the past years.  “Room XVII does not only shine in a new design, but also has technical features that will ultimately help delegates focus on finding solutions – under the blue Emirates sky – to the world’s problems that are being addressed here in Geneva,” said Mr. Møller.

Conference Room XVII, situated in Building E and built in the early 1970s, had become dilapidated over time.  No longer serving the modern conference needs of the twenty-first century, the room had warranted a complete renovation.  In autumn 2014, Mr. Møller and Obaid Salem Saeed Al Zaabi, Ambassador and Permanent Representative of the United Arab Emirates to the United Nations Office at Geneva, signed an agreement on the renovation of the room, to be fully financed by the United Arab Emirates.  Two renowned architects, Siavosh Adeli, from Lausanne, and Joakim de Rham, based in Dubai, were selected to work on the project.

The works commenced in July 2015 and were completed in May 2016, for the total cost of $22 million. The spectacular ceiling of the renovated “Salle des Emirats”, which weighs 20 tons, now contains a round metallic structure showing the name of the United Arab Emirates written in stylized Arabic calligraphy.  As impressively, the ceiling of “La Salle des Emirats” changes colours and the level of light according to the time of the day.

Highlighting the many features of the renovated room, including greater accessibility for all and the finest technology, Deputy Secretary-General Eliasson said: “We cannot address today’s global governance challenges with yesterday’s tools. This room now benefits from adaptations that have brought it into the 21st Century and make it a model for open and inclusive discussions.”

This remarkable room, which was refurbished in the context of the renovation efforts of the Palais des Nations, is likely to become a future landmark of the Palais des Nations.  The Palais, home to the United Nations Office at Geneva, should also undergo a complete renovation with the implementation of the Strategic Heritage Plan which is presently in its planning phase.

Building code compliance and greater accessibility for persons with disabilities are among the key objectives of the project, which also foresees the construction of a new building.  Restoration and construction works will begin in 2017 and are expected to conclude by 2023.

Note to editors: Photos of the ceremony will be available on https://www.flickr.com/photos/unisgeneva/