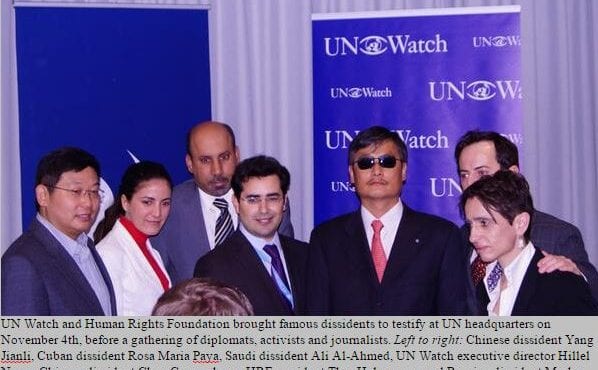 Comment by UN Watch on UNHRC Election
“China, Cuba, Russia, and Saudi Arabia systematically violate the human rights of their own citizens,” said UN Watch executive director Hillel Neuer, “and they consistently vote the wrong way on UN initiatives to protect the human rights of others.”
“For the UN to elect Saudi Arabia as a world judge on human rights would be like a pyromaniac the fire chief.”
“Regrettably,” said Neuer, “so far neither the U.S. nor the EU have said a word about hypocritical candidacies that will undermine the credibility and effectiveness of the UN human rights system. By turning a blind eye as human rights violators easily join and subvert the council, leading democracies will be complicit in the world body’s moral decline.”
“It will be an insult to their political prisoners and many other victims — and a defeat for the global cause of human rights — if the UN helps gross abusers act as champions and global judges of human rights. When the U.N.’s highest human rights body becomes a case of the foxes guarding the henhouse, the world’s victims suffer,” said Neuer.
Quotes from Dissidents
Chen Guangcheng, Chinese rights activist and former political prisoner: “China wants to join the UNHRC not to promote human rights, but rather to prevent democracies from questioning their human rights record.”
Yang Jianli, Chinese dissident, survivor of Tiananmen Square, former political prisoner, president of Initiatives for China: “We call on all democracies to cast a “No” vote on China. After all, how could democracies vote with a straight face to place China, the world’s leading human rights violator on the body charged with protecting human rights?”
Rosa Maria Payá, Cuban dissident heading a global campaign to investigate the mysterious death of her father, legendary Cuban democracy leader Oswaldo Paya: “The presence in the Human Rights Council of the Chinese, the Russian, the Saudi and the Cuban regimes, is disappointing for the victims of repression, and it sends a message of complicity from the international community. Cubans know that we are responsible to lead our country towards a democratic transition, but this is a time for solidarity, and democratic governments should not share seats with criminals, which behave with impunity, since they are not suffering any consequence for their violations.”
Ali Al-Ahmed, Saudi scholar, founder and director of Gulf Institute, once the Saudi Kingdom’s youngest political prisoner at age of 14: “The Saudi Monarchy is at war with its people leading to the continued arrest of more than 20,000 political prisoners in Saudi jails, some for more than 10 years. Torture is common and has lead to the death of few dozen over the years. Any government that supports the Saudi Monarchy membership to the UN Human Rights Council also supports racism and xenophobia.”
Appeal by MPs and NGOs Against UNHRC Candidacies of Algeria, China,
Cuba, Russia, Saudi Arabia and Vietnam
Excellency,
We, the undersigned members of parliament, human rights activists and non-governmental organizations, call on you to publicly oppose the candidacies of Algeria, China, Cuba, Russia, Saudi Arabia, Vietnam, for seats on the United Nations Human Rights Council, elections for which will be held on November 12, 2013.
We urge you to take action to defeat these manifestly unworthy candidacies, which threaten to cast a shadow upon the reputation of the Council—and of the United Nations as a whole.
Candidates for the UN Human Rights Council, according to General Assembly Resolution 60/251, are supposed to be countries that “uphold the highest standards in the promotion and protection of human rights.”
Yet it is widely recognized that Algeria, China, Cuba Russia, Saudi Arabia and Vietnam fail to meet these basic membership criteria. They have poor if not abysmal records on human rights protection at home, and on human rights promotion at the UN.
Rather than giving these non-democratic governments influence over vital decision on human rights, we urge you to introduce resolutions at the United Nations to hold these nations accountable, and to condemn their gross and systematic human rights violations.
Silence is complacency. For the sake of millions of victims worldwide who need a credible and effective international human rights body, please do not be silent.
Sincerely,
Edward McMillan-Scott, MEP
European Parliament Vice-President for Human Rights & Democracy
Elmar Brok, MEP
Chair of Committee on Foreign Affairs, European Parliament
Guy Verhofstadt, MEP
Leader of Alliance of Liberals and Democrats for Europe (ALDE)
Former Prime Minister of Belgium
Baroness Deech
Member of the British House of Lords
Academic, lawyer, bioethicist, former Principal of St Anne’s College, Oxford
Baroness Ludford
Member of European Parliament, UK
Honourable Irwin Cotler, MP
Member of Canadian Parliament, Liberal Party Critic for Rights & Freedoms, International Justice
Former Justice Minister & Attorney General
Emanuelis Zingeris, MP
President of the Parliamentary Forum for Democracy, Lithuania
Matyas Eörsi
Secretary General of the Parliamentary Forum for Democracy, former MP, Hungary
Dr. Mantas Adoménas, MP
Lithuania
Michael Danby, MP
Australia
Egidijus Vareikis, MP
Lithuania
Bi-khim Hsiao
Member of the Legislative Yuan, Taiwan
Hans van Baalen
Member of the European Parliament, Netherlands
Hannu Takkula
Member of European Parliament, Finland
United Nations Watch
Hillel Neuer, Executive Director
Switzerland
Human Rights Foundation
Thor Halvorssen, President
Initiatives for China
Yang Jianli, President
Council for a Community of Democracies
Robert LaGamma, President
The Gulf Institute
Ali AlAhmed
Mothers and Women against Repression, M.A.R. Por Cuba
Sylvia Iriondo, President
Viet Tan
Do Hoang Diem, Chairman