This is fantastic. @HillelNeuer speaking truth to power by bravely calling out the absurdity of countries like Russia, China and Venezuela sitting on the UN Human Rights Council. Please take 2 minutes to watch this clip https://t.co/l0ycB4fFR4


Venezuela: Some powers with horrific colonialist track records seek to give human rights lectures. Thanks to the Bolivarian Revolution we have a society that fully guarantees all human rights and democratic freedoms…

Russia: The EU continues to bury its head in the sand when it comes to the discriminatory policy of the Baltic countries…

Iran: The fault of violence against women and girls is through misusing available technology…

China: How about the real human rights situation in the EU and many other countries in terms of receiving and accepting refugees… there is serious racism and xenophobia…

Saudi Arabia: Saudi Arabia’s legislation pays special attention to women by prohibiting the use of violence against women and preserving women’s dignity within the family and within the workplace…

Hillel Neuer, United Nations Watch: Mr. President, we reject the attempt by brutal regimes to use the United Nations to corrupt the language and idea of human rights.

Indeed, regular people around the world ask: “Why does a human rights council include so many non-democracies?”

Defenders of the system have a ready reply: “We need a big tent,” they say, “so that countries with poor records can engage, learn and improve.”

Well, perhaps nations with spotty records, but who actually wish to make progress, can be embraced and given technical cooperation, for example, to train their judges or police.

But does the UN have to keep electing the world’s worst abusers, dictatorships whose only intent is to win a false badge of international legitimacy?

I ask all those here who propagate the “big tent” theory: Since Vladimir Putin’s Russia was elected again and again to this Council, over a decade, did he learn and improve? Or on the contrary, did Russia assassinate more journalists, persecute more dissidents and launch more deadly military invasions than ever before?

Since China was elected repeatedly to this Council, did the Communist rulers learn and improve? Or did they crush more dissidents, like Liu Xiaobo, than ever before?

And I want to know: Since Venezuela was elected and reelected to this Council, did Chavez and Maduro learn and improve? Or did they arrest, persecute and jail more opposition leaders, like Mayor Antonio Ledezma of Caracas?

Venezuela: It is unacceptable in this Human Rights Council for an NGO to use offensive language which is not allowed by the regulations of the United Nations. We launch an appeal for proper language to be used when referring to the honor of our political leaders. My country respects freedom of expression but this cannot be understood as giving permission or carte blanche to demonize any country. The Human Rights Council is a forum for promoting dialogue and not confrontation. Abusive and offensive language towards my country, and towards the political leaders in my country, we do not tolerate. President, we hope that you will call this speaker to order.

UNHRC President: Thank you very much. I would like to call on everyone to adhere to a language that is commensurate with the dignity inherent to the discussion of human rights issues. Tolerance and respect should be the key words of the work of this Council. With this in mind, I give back the floor to the speaker.

Hillel Neuer: What is offensive is that Venezuela kills protesters and uses this Council as carte blanche to cover up their abuses. “Big tent,” Mr. President? No: Big lie. 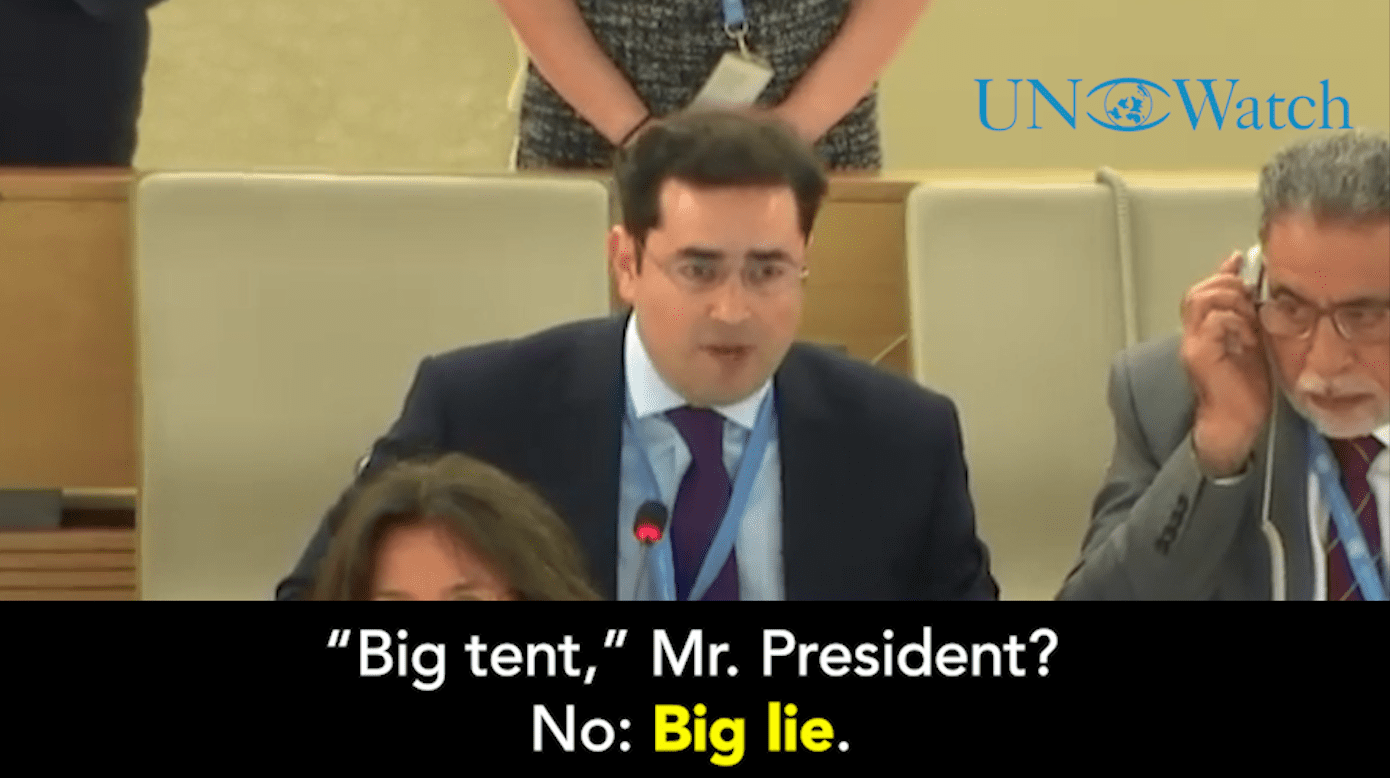