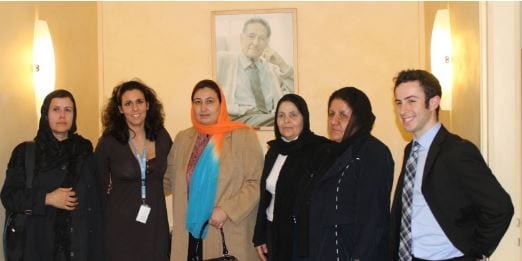 GENEVA, Oct. 27 – Afghan women’s rights hero Dr. Massouda Jalal visited UN Watch headquarters today as part of a Europe-wide campaign to warn the international community not to legitimize the Taliban at an upcoming December summit in Bonn of 90 governments on the future of Afghanistan.

Dr. Jalal, a pediatrician who was Minister of Women’s Affairs and Afghanistan’s first woman to run for president, heads a delegation of Afghan women activists lobbying policymakers in Paris, Brussels, Berlin and Geneva.

“The Taliban are gaining power,” she told UN Watch today, “and there is great danger for educated women.”

The Taliban and religious extremism are being supported by the Iranian regime, which is increasing its influence in the region, said Jalal.

“The situation is very critical. The level of corruption in the Afghan government doesn’t allow for reform,” she said.

“If you’re not part of the extremist majority, you have no chance of having your voice heard. They dominate the political system as well as the media, influencing public opinion.”

Dr. Jalal expressed grave concern that the December Bonn Conference on Afghanistan will legitimize and empower Taliban and other religious extremists by allowing them to participate.

“The international community should be empowering the democrats and educated women,” said Dr. Jalal. “Why is my organization, the Jalal Foundation—which represents a large part of the civil society—not being invited to participate?”

Dr. Jalal also met in Geneva with the UN rights office, the UN refugee agency and the Canadian mission.

Her European tour was coordinated by the Brussels-based South Asia Democratic Forum.