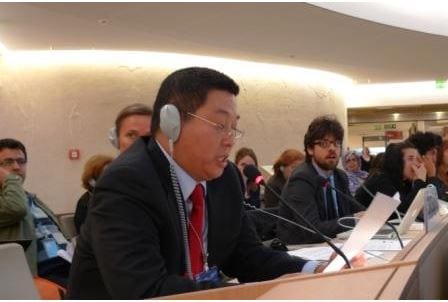 GENEVA, March 15 – The Chinese government today interrupted testimony by one of its most well-known former political prisoners in the plenary of the UN Human Rights Council. The Chinese delegate, supported by Cuba, objected that Dr. Yang Jianli, who spoke on behalf of the Geneva human rights group UN Watch, was not addressing the issue under debate, which was “human rights situations that require the council’s attention.”

The U.S. delegate intervened to defend Dr. Yang’s right to speak, and the council president allowed him to complete his speech. See full text below of print version as delivered to the UN.

Thank you, Mr. President. My name is Yang Jianli. I am the president of Initiatives for China and a Harvard Fellow. In 1989, I was in Tiananmen Square, where I witnessed the massacre of thousands by the guns and tanks of the Chinese army. In 2002, I was arrested by the Chinese government for helping the peaceful labor movement. I served five years in prison.

I have come here today because this council is supposed to be the world’s protector of human rights. And so I ask this august body:

When the Nobel Peace Prize was awarded three months ago to Liu Xiaobo, a writer who is serving an 11-year jail sentence for having called for freedom—and the human rights situation in China rose to the top of the world headlines—why did you not speak out?

Why have you adopted no resolutions urging the Chinese government to respect the rights that are guaranteed under China’s constitution—the very rights it violated in imprisoning Liu Xiaobo?

Where were you when his wife, Liu Xia, cried out desperately for help a few weeks ago, because her life has become unbearable?

Where were you, when police and hired thugs brutally beat Mr. Chen Guangcheng, a blind human rights defender, and have since surrounded his house, 24 hours a day, since his release from prison last September?

Mr. President, I ask this council: Do you hear the cries of the Tiananmen Mothers?

When will you address the recent, brutal crackdown on Chinese citizens, who peacefully gathered for walks around Chinese cities, after hearing about the uprisings in the Middle East? Many have been arrested or disappeared.

When will you demand accountability from the individuals responsible for the Tiananmen Square Massacre, and for other gross and systematic violations of human rights in China? When will these perpetrators be subjected to a travel ban, an asset freeze, and a reference to the International Criminal Court?

Mr. President, three weeks ago Colonel Qaddafi justified his bloody actions by pointing to what China did to “those people on Tiananmen Square.” Does this not show how ignoring crimes in one place only encourages them to spread elsewhere? And can the millions of Chinese victims ask why this council suspended Libya for killing its own people, yet allows the Chinese government to continue to sit here as a member?