UN Watch is deeply grateful to our many thousands of friends and supporters worldwide who signed the petition, and in some cases made personal appeals, to urge Facebook to remove its threat to delete our Executive Director’s Facebook page.

We also commend senior officials at Meta, the parent company of Facebook, who took quick action when apprised of the situation, and issued the following statement: “This post was removed in error and has now been restored. We have also removed the restrictions on this Page, and have apologized to Hillel Neuer for the inconvenience caused.”

Please see the CNS News report below for the full story.

A threat by Facebook to permanently shut down the account of the head of a leading Geneva-based non-governmental group prompted an outcry this week – and the tech giant reversed an earlier decision to take down a post for allegedly violating its “Community Standards.”

The incident has highlighted again opaque decision-making by those who police content on social media platforms.

The offending post by Hillel Neuer, executive director of the NGO U.N. Watch, went up last August, two days after Kabul fell to the Taliban. Featuring a photo of gunmen from the terrorist organization posing in the presidential palace now under their control, it carried the caption:  “Prediction: Ben and Jerry’s will never announce a boycott of the Taliban.”

Neuer’s post alluded to the U.S. ice-cream maker’s controversial decision, weeks earlier, to stop selling its products in territories disputed between Israel and the Palestinians.

While the implied criticism targeted the liberal management of Ben & Jerry’s and the post was self-evidently not supportive of the Taliban, the Facebook moderators in justifying their decision to remove it declared that it “goes against our Community Standards on dangerous individuals and organizations.” 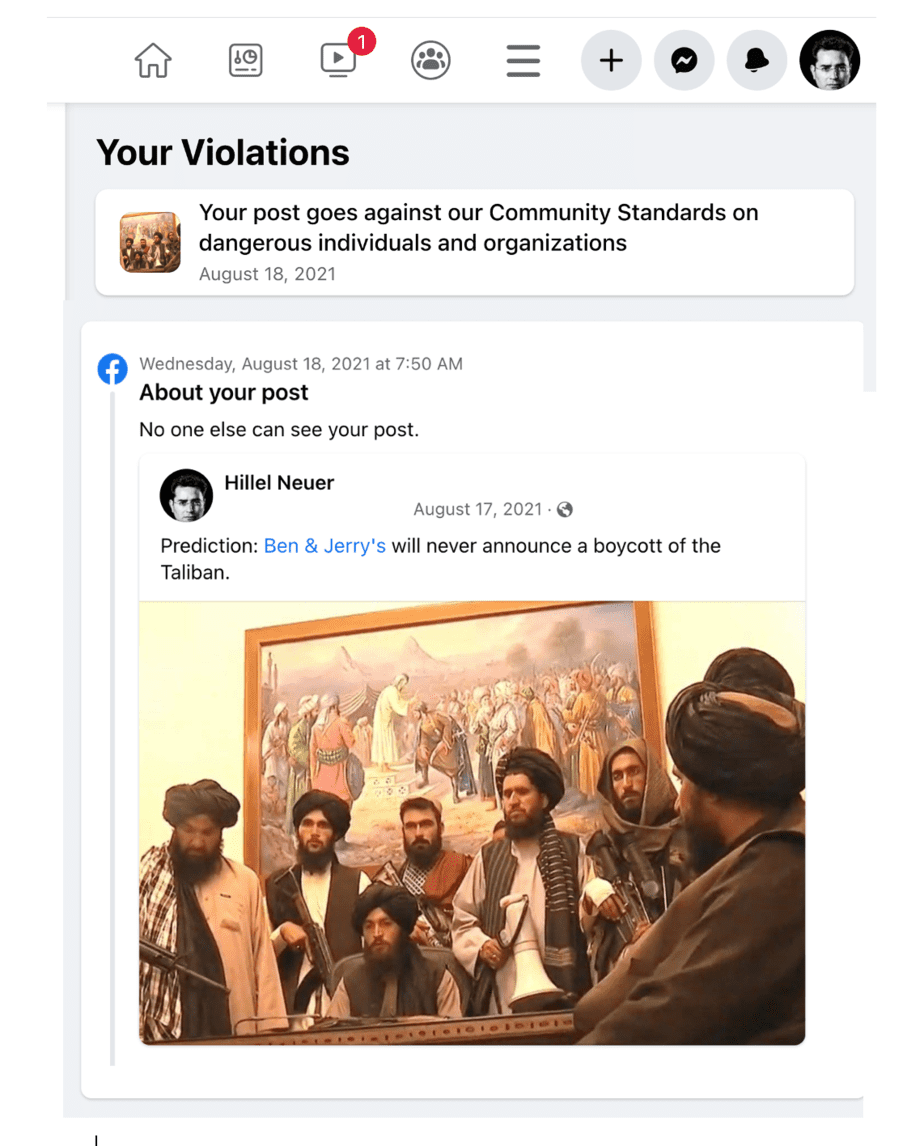 Neuer was also told, “Your page is at risk of being unpublished, and has reduced distribution and other restrictions, due to continued Community Standards violations.”

Further, he received a warning that he could forfeit his account altogether: “Don’t lose your page! If you get a few more Community Standards violations, you could lose Hillel Neuer forever. Nobody wants that – help our by appealing violations you disagree with, but more importantly, try to share content that follows the rules.”

U.N. Watch legal advisor Dina Rovner last month wrote to the chief legal officer of Facebook’s parent organization, Meta, asking for clarity on the decision to take down the post – along with another one, posted on the U.N. Watch account – arguing that the threat to delete the account was being made on “entirely baseless grounds.”

“In fact, thousands of people who read and liked this post, which was shared on various social media platforms, understood that it was condemning the horrific human rights abuses of the Taliban, a terrorist organization subject to U.N. Security Council sanctions, and implicitly criticizing the ice cream company’s decision to cancel the license of its Israeli distributor, even as Ben & Jerry’s turned a blind eye to gross abuses worldwide,” Rovner wrote.

“We can only speculate that bad faith actors orchestrated certain actions that caused Facebook to strike the post from Mr. Neuer’s page — leading to your shocking and baseless threat to remove his account,” she said.

This week Neuer went public about the Facebook actions, and U.N. Watch launched an online petition on the matter that quickly garnered more than 11,000 signatures.

In response to queries sent to Meta about the warning that the account could be shut down permanently, and a request for an explanation of how the Taliban/Ben & Jerry’s post had violated the Community Standards, a company spokesperson provided a brief response by email late on Tuesday night.

“Last year, we took down a post from this account in error. Upon review, we realized our mistake and the post was reinstated,” the Meta spokesperson said. “We apologize for any inconvenience caused.”

The official did not respond to the query about the reasoning behind the original takedown decision.

Neuer’s Facebook account has 49,000 followers while the U.N. Watch accounthas 169,000 followers. Before Facebook reversed its stance, he said that he and the organization “rely on social media to share our vital information about human rights and the United Nations, yet Facebook is stifling our voice and now threatening to shut us down.”

Founded in 1993, U.N. Watch has become an effective watchdog of the U.N. and especially its human rights apparatuses in Geneva — the U.N. Commission for Human Rights and, since 2006, its successor, the Human Rights Council.

It is an accredited NGO, meaning representatives are able to take part in HRC sessions. Video clips of Neuer using the platform to challenge some of the world’s most abusive regimes have been viewed in some cases millions of times.

Diplomats from such regimes periodically try to shut him down, with mixed results.

“I am troubled by the lack of clarity in Facebook’s Community Standards, and the lack of transparency and arbitrariness in the application of those standards,” Neuer said earlier this week of the Facebook actions.

“It’s possible that this censorship was caused by individuals abusing those standards, acting in bad faith to harass me, but whatever the reason, it needs to stop.”