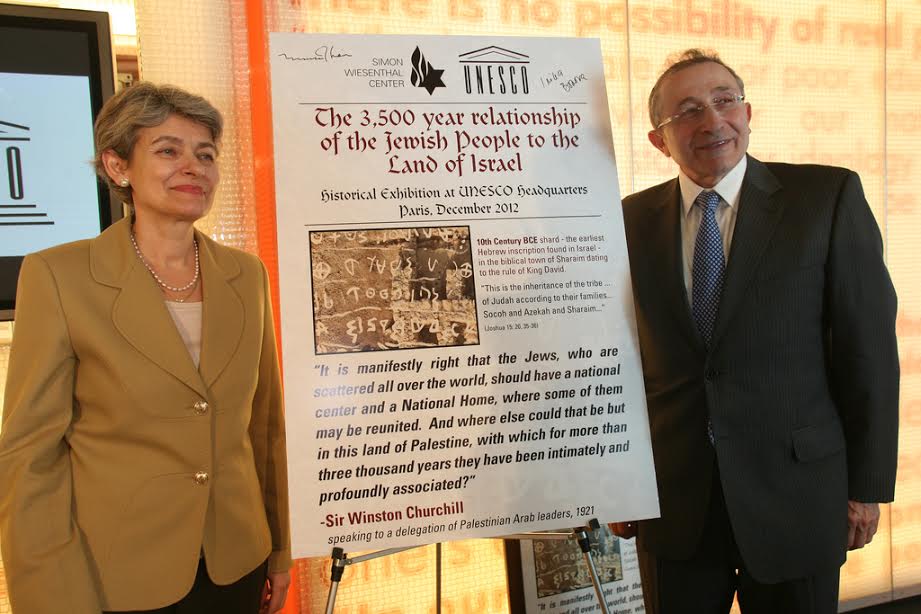 Thank you for your letter of 14 January, 2014, regarding the postponement of the inauguration of the exhibition, co-organised with UNESCO and planned for 20 January, 2014, entitled “People, Book, Land – The 3,500 Year Relationship of the Jewish People to the Holy Land.” In this regard, I wish to say from the outset that I regret that a number of elements relating to the proposed exhibition by the Simon Wiesenthal Center were still not cleared when I received the letter from the Chairperson of the Arab Group, despite the constructive cooperation and dialogue in the preparatory phases of the exhibition.
As Eric Falt, my Assistant Director-General for External Relations, indicated in his letter of 14 January, 2014, to Mr Shimon Samuels, the postponement of the inauguration follows on the receipt of a letter from the Chairperson of the Arab Group at UNESCO, written on behalf of the 22 Members of the Arab Group to UNESCO, which raises the concern that the exhibition might have a potential impact on the peace process and current negotiations in the Middle East.
UNESCO is deeply committed to the successful outcome of the peace process in order to achieve stability in the region, and we have a responsibility in ensuring that current efforts in this regard are not endangered. As you understand, UNESCO is fully in line with the overall efforts of the UN system to support the peace process in the Middle East. This is precisely why I, as Director-General, have been always committed to deploying relentless efforts in order to achieve consensus on ail the issues falling within UNESCOs educational, scientific, and cultural mandate in order to avoid confrontation and politicization.
Equally, you are well aware I hope, of my very firm dedication to building consensus in all UNESCO decisions and resolutions taken by Member States on issues relating to the Middle East. I would draw your attention, for instance, to the success of the last session of the UNESCO General Conference in this respect. I have repeatedly reiterated that consensus is one of the most viable ways for UNESCO to implement effectively its mandate in the areas of its competence. Consensus is essential to all of UNESCOs work to strengthen the foundations for lasting peace and sustainable development – and this work is directly in line with the wider efforts of the international community to create an atmosphere and conditions conducive to progress in the peace process
This spirit underpins all of my efforts – including, for instance, the very successful International Symposium that we held under UNESCO patronage on 12-13 November, 2012, on the “Permanence of Yiddish,” an initiative of B’nai B’rith Representation, which is also an official partner of UNESCO in associate status, and with the participation of the Paris Yiddish Center – Modern Library.

After nixing exhibit on Jews & Israel, UNESCO responds: "But we held symposium on The Permanence of Yiddish!" #OyVey http://t.co/MhWsqIdzn6

This same spirit, I would add, guides all of our work to promote education for human rights and peace, including holocaust education, where UNESCO plays a unique and leading role in the United Nations system. Our cooperation with non- governmental organizations, such as the Consultative Council of Jewish Organizations, the International Council of Jewish Women and the World Jewish Congress, just to name a few, bears witness to UNESCOs active cooperation with Jewish organizations.
In this very spirit, and having in mind the delicate phase that the peace negotiations are entering, I have no choice but to take seriously the concerns raised in the letter of the Chairperson of the Arab Group. This is all the more important, as the UNESCO Secretariat is beholden by its rules and regulations to consider fully the concerns raised by its Member States or any Regional Group regarding planned exhibitions or manifestations.
I look forward to discussing these issues further with you in order to define a modality for moving forward with our cooperation.
Thanking you for your understanding, I remain,
Yours sincerely,
Irina Bokova