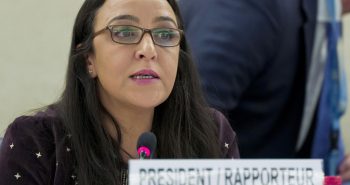 As chair of the UNHRC Consultative Group, the Saudi government has access to unique information and influence. Certain members of the powerful consultative group have in the past used their positions to unfairly privilege their preferred candidates.

Most famously, Morocco’s ambassador in 2014, according to a leaked cable, faxed to his ministry a confidential document outlining the entire interview procedure and questions that Houria Es-Slami, a candidate from Morocco, would be asked.

Coincidentally, we are certain, Ms. Es-Slami then succeeded in obtaining the consultative group’s top ranking, and now sits on the UN working group on disappearances.

Amnesty International later filed a complaint after the episode was leaked, and the president acknowledged the integrity challenge.