The following UN Watch written statement was published by the United Nations as official document A/HRC/44/NGO/132 for the 44th session of the Human Rights Council. 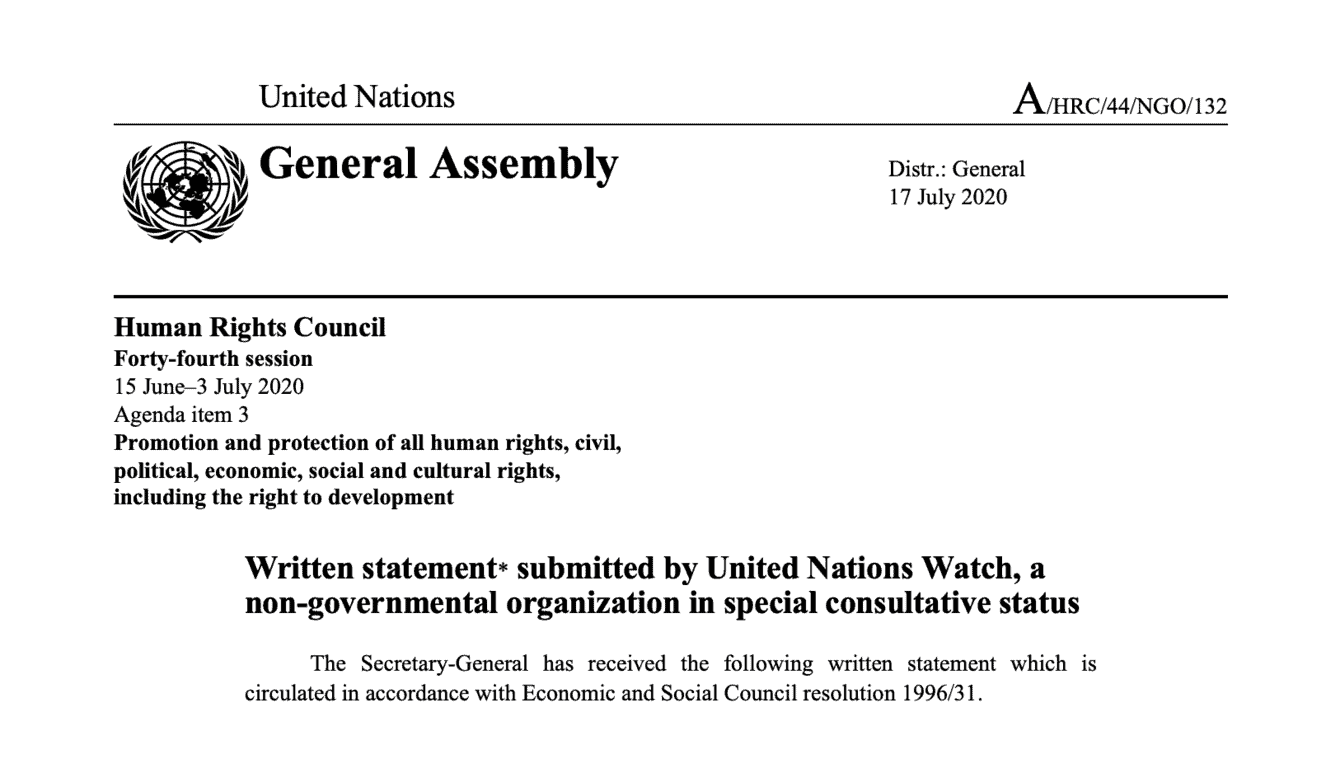 United Nations Watch is deeply concerned by Palestinian Authority (PA) and Hamas violations of the right to life of Israeli and Palestinian children in breach of the International Covenant of Civil and Political Rights (ICCPR) (article 6) and the Convention on the Rights of the Child (CRC) (articles 6 and 38) to which the State of Palestine is a party.

The Palestinian Authority acceded to these human rights treaties in April 2014. The period since has been marked by several waves of Palestinian terrorism and violence, resulting in both Palestinian and Israeli children being killed. Israeli civilians, including children, were the specific targets in many of the terrorist attacks.

Just two months after the PA joined these treaties, Hamas terrorists kidnapped and brutally murdered three Israeli teenagers (two of them under age 18). This incident was followed by the summer 2014 Gaza war, an intense seven-week conflict in which hundreds of Gaza rockets were indiscriminately fired at Israeli cities, many launched from in or near schools or other civilian infrastructure putting both Palestinian and Israeli children at risk.

The only reason Israeli civilian casualties were so low is because of the extensive measures Israel takes to protect its citizens, for example, by building bomb shelters, deploying the iron dome missile defense system, and blaring warning sirens of incoming rocket attacks. Despite these measures, just a few days before the end of that war a 4-year-old Israeli, unable to reach the shelter in time, was killed by a mortar fired from Gaza. Shockingly, the lethal mortar was launched from near a school being used to shelter Palestinian civilians.[1]

One disturbing aspect of this wave of terror is the numbers of child perpetrators. A recent report found that 174 Palestinian children carried out 142 separate terrorist attacks during this period, killing 7 Israelis and wounding 58.[3]

These child terrorists were responding to pervasive anti-Israel incitement and glorification of martyrdom coming from Palestinian leaders, on Palestinian television, and in the Palestinian education system. For example:

These are not isolated incidents. They reflect a culture of hatred and violence inculcated in Palestinian youth from a very early age. Through the education system and the media, children are taught that Israel has no right to exist because Israel proper really belongs to the Palestinians. Children are encouraged to follow in the footsteps of famous terrorists, who are honored and glorified. Israel, Israelis, and Jews are routinely demonized.

Antisemitic and terrorist incitement in Palestinian media includes the following:

3. Palestinian children are incited to violence with images of children holding weapons

We call on the High Commissioner and the Special Rapporteurs on racism and religious freedom, as well as UN member states, to strongly condemn all incitement to violence directed at Palestinian children and to demand the Palestinians end such incitement.

[3] A Society Not Ready for Statehood: Palestinian Children Who Kill and Their Adult Enablers, Human Rights Voices (Sep. 6, 2018), http://www.humanrightsvoices.org/assets/attachments/documents/Report_on_Palestinian_Child_Terrorists._September_2018.2.pdf.

[4] Teen given life in prison for cold-blooded murder of Dafna Meir, Times of Israel (Nov. 2, 2016), https://www.timesofisrael.com/teen-given-life-in-prison-for-cold-blooded-murder-of-dafna-meir/.