Nazanin Afshin-Jam, international human rights activist and President of Stop Child Executions, was hosted by UN Watch in September 2009 for a panel discussion during the U.N. Human Rights Council’s 12th session. She also spoke before the Council on grave human rights abuses in Iran following the election crisis. Read below her update about a recent meeting with the Dalai Lama. 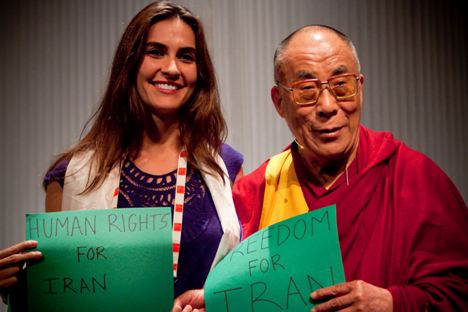 On Sunday September 27th 2009, I had the opportunity to meet His Holiness the Dalai Lama at the Vancouver Peace Summit put on by the Dalai Lama Center for Peace and Education. I spoke to him about the plight of the Iranian people suffering grave human rights abuses under the stranglehold of the current regime and the urgency for the international community to take action, especially in light of the violence, deaths, detainments, disappearances and systematic rape since the fraudulent presidential elections in June.

I asked His Holiness if he would stand in solidarity with the Iranian people by holding a sign that says “Freedom for Iran” and “Human Rights for Iran”.  When the Dalai Lama agreed without hesitation, I hugged and thanked him. I was so elated because I knew what an important symbol it would be for the people inside Iran. I want the Iranian people to know that they have not been forgotten and that the international community stands beside them.

The Dalai Lama had said over a decade ago when he received the Nobel Peace Prize:

“Peace can only last where human rights are respected, where people are fed, and where individuals and nations are free”.