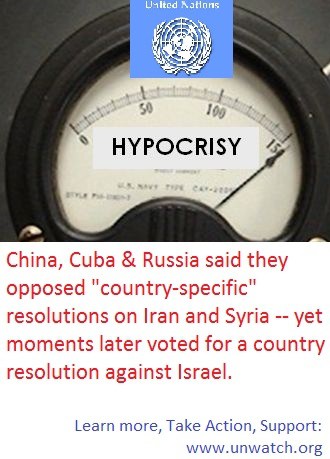 In an astonishing display of hypocrisy even by U.N. standards, numerous country delegates gave impassioned speeches last week objecting to the adoption of resolutions criticizing the murderous regimes of Iran, North Korea and Syria, saying they rejected the practice of singling out specific countries; and then proceeded, only moments later, to vote for a resolution — which most of them also co-sponsored — singling out democratic Israel.

There will be a total of 22 one-sided resolutions targeting the Jewish state in this session of the U.N. General Assembly, and only 4 on the rest of the world combined.

Here were the objections of high principle against any naming and shaming of specific countries:

Moments later, however, all of these principled objections to “country-specific” measures, “politicization,” and “selectivity” went out the door. The countries quoted above joined others in voting for a resolution that singled out and slammed Israel for alleged actions that “severely impede the right of the Palestinian people to self-determination.” Suddenly, Belarus and  Venezuela went silent, failing to demand any alternative U.N. “dialogue” with Israel.

Needless to say, there will be no resolutions in this session supporting Jewish self-determination, or that of the Kurds, Tibetans, Basques or Baluchis.