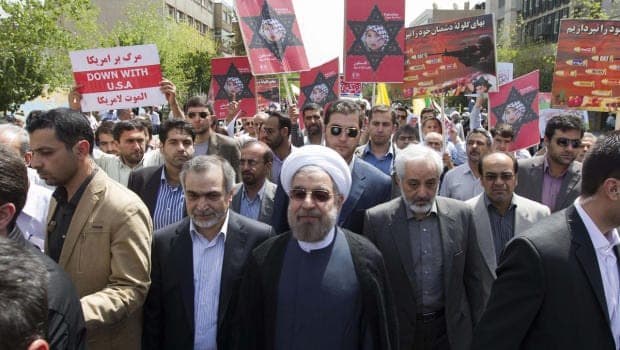 Above: New Iranian President Hassan Rouhani, repeatedly described by Euronews this week as “moderate,” at a rather immoderate rally in Tehran, August 2, 2013.
GENEVA, August 5 – UN Watch is urging UN Secretary-General Ban Ki-moon and human rights chief Navi Pillay to condemn the latest call to eliminate Israel by the leaders of Iran and Hezbollah, who invoked God and religion in their sermons of hate.
Friday’s “Al Quds Day,” an anti-Israel festival bequeathed to the world by Ayatollah Khomeini, saw Iran’s outgoing and incoming presidents incite frenzied masses with descriptions of the Jewish state as “a sore” that has “afflicted the body of the Islamic world for many years,” saying a storm would “uproot” Israel, which “has no place in this region.” Iranian proxy Hassan Nasrallah, head of Hezbollah, called Israel a “cancerous gland” to be “excised.” The West, especially the U.S. and Britain, were also targets of demonization. 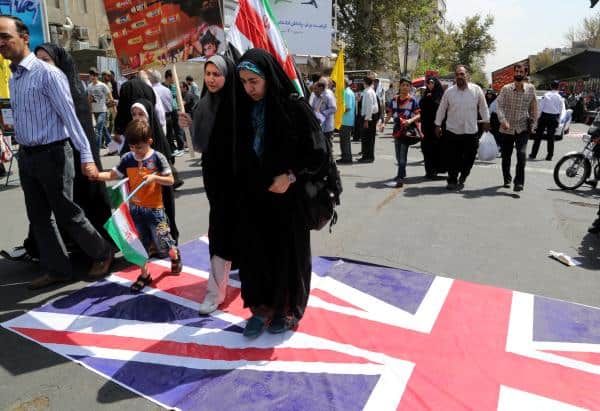 While UN Watch’s appeal for United Nations action became the focus of discussion at a media briefing by Ban Ki-moon’s spokesman, the world body has yet to speak out.
By contrast, one cannot help but notice how when a marginal and unheard-of pastor in America incited to hatred of Islam, Ban Ki-moon swiftly condemned him, as did various and sundry other UN officials. American generals and ambassadors issued repeated denunciations. The world was in an uproar.
Similarly, when an even more marginal figure — an anonymous individual — published a YouTube video mocking Islam, UN High Commissioner for Human Rights Navi Pillay sprung into action. 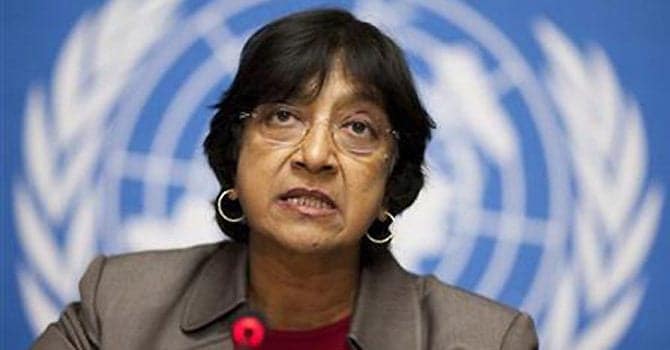 She issued a stand-alone press statement calling the film “malicious,” “deliberately provocative,” and a “disgracefully distorted” image of Muslims.
“I fully understand why people wish to protest strongly against it,” said Pillay, who also cautioned against violent reactions.
She recalled “another deeply provocative act by a pastor in Florida,” condemning “obnoxious acts of this type.”
Yet when religiously-tinged incitement to hatred on a mass scale is committed by the leaders of Iran and Hezbollah — a coalition member of the Lebanese government, whose “political wing” is an approved EU interlocutor — why is Ms. Pillay suddenly unwilling to offer so much as a press quote?
When “moderate” Iranian President Hassan Rouhani declares that Israel is “a sore” afflicting the Muslim body, why is Pillay unable to find this, at the every least, malicious, provocative, disgraceful, distorted, or obnoxious? Why is the world’s top anti-racist indifferent? And what of the UN’s top official, Ban Ki-moon?
__________

His Excellency Mr. Ban Ki-moon
The Secretary-General
The United Nations
New York, NY 10017
August 5, 2013
Dear Mr. Secretary-General,
United Nations Watch expresses its outrage at the latest incitement to hatred by the leaders of Iran. We urge you, together with High Commissioner for Human Rights Navi Pillay, to condemn these gross violations of the United Nations Charter and of core UN declarations against racism and intolerance.
We call your attention to the following incidents from Friday, 2 August, in connection with “Al Quds Day,” a festival of hate created by the late Ayatollah Khomeini:

These are not statements by marginal and unknown figures, but televised speeches by senior figures inciting to religious hatred—and specifically to the elimination of a United Nations member state, an illegal threat under international law.
As you know, the UN Charter obliges all member states to refrain from the threat or use of force against the territorial integrity or political independence of any state.
We urge you to speak out.
Sincerely,