The formal debate will take place on Monday, June 29th, but no one knows precisely when the much-discussed report of the U.N. Commission of Inquiry on the 2014 Gaza Conflict will be made available online.
Ahead of its release, three significant competing documents have just been published, posing a serious challenge to the UN commission, whose members lack any background or expertise on the laws or conduct of war:
• The Israeli foreign ministry released a 277-page report that details with photo and other evidence how Hamas used schools, hospitals and UN facilities as launching points from which to fire rockets at Israel, turning their own population into human shields and targets.
• A mission by global military leaders has found that Israel went out of its way to minimize civilian casualties and observe international law during last summer’s crackdown in Gaza, even to the point of costing the lives of its own soldiers. The preliminary findings by the international military experts, publicized by UN Watch on Friday, had been submitted in May to the UN inquiry.
• UN Watch and NGO Monitor have just published a new book that documents missing dimensions in UN and other partisan investigations of the Gaza conflict. Written by a group of experts, the book reveals how rockets and missiles are produced and imported by Gaza terrorist organizations, the financing of Hamas in violation of international law, and Hamas’ abuse of international humanitarian aid.
UN Watch Takes the Floor: “Why did you reward Iran & Saudi Arabia with top posts?”

Saudi Arabia: “My country, we are based on Islamic Sharia, which upholds human rights.”
Venezuela: “My country is a model of political tolerance… All people may express their opinions and criticisms freely.”
Russia: “Crimea is an integral part of the Russian Federation. This is an objective reality. You can accept it or not, but you have to reckon with it.”
Iran: “We are alarmed by horrendous acts of religious and racial hatred in different parts of the world, in particular in Western societies.”

UN Watch Responds (Hillel Neuer):
Thank you, Mr. President. The High Commissioner spoke of the need to end impunity. Yet what we are witnessing here at the United Nations is this: Countries that commit gross and systematic violations of human rights are not only given immunity, but they are actually rewarded with high positions.
When member states are silent, the High Commissioner must lead. We urge him to consider, and we ask:
Why is it that Saudi Arabia, which subjugates women, which just expelled a student from university because she lowered her veil on a female-only schoolbus, is rewarded by the UN with a seat on this Human Rights Council?
Why is it that Saudi Arabia, which just upheld the conviction of blogger Raif Badawi, and his punishment of a thousand lashes and ten years in prison for the crime of “insulting Islam,” was allowed to play host in Jeddah, the city where Mr. Badawi was flogged and remains in prison, to a UN-backed conference on “combating religious intolerance”?
Why is it that a country now advertising for more executioners to behead more prisoners than ever before, had the thought that it could be head of this Council? 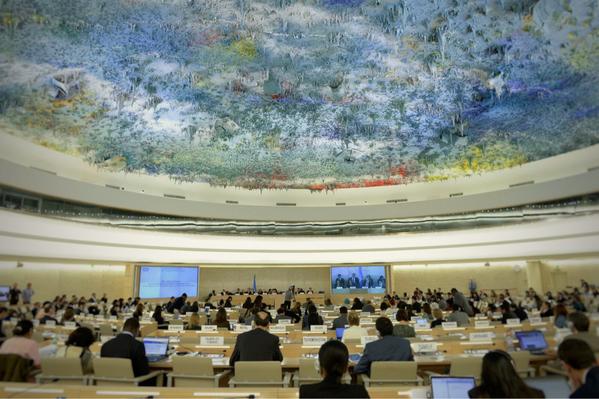 The High Commissioner spoke of the war in Yemen. Yet the two words “Saudi Arabia” — which has been pounding the country indiscriminately, with 2200 killed, 10,000 wounded, 20 million in need of aid — were carefully omitted.
So too, we heard nothing today on Iran, which has equally played a deadly role in Yemen, as it continues to sponsor the killers of innocents in Syria, Iraq, Gaza and Lebanon, just as it oppresses its own people at home.
Silence is bad enough. Yet given its horrific record on child marriages, forced head-coverings, domestic violence, gender inequality, and the constant harrassment and arrest of women by morality police, by what logic — by what morality — did the UN, just two months ago, reward the Islamic Republic of Iran with a seat on the board of UN Women?
Will any member states speak out against the practice of rewarding the perpetrators?
Will the High Commissioner?
I thank you, Mr. President.