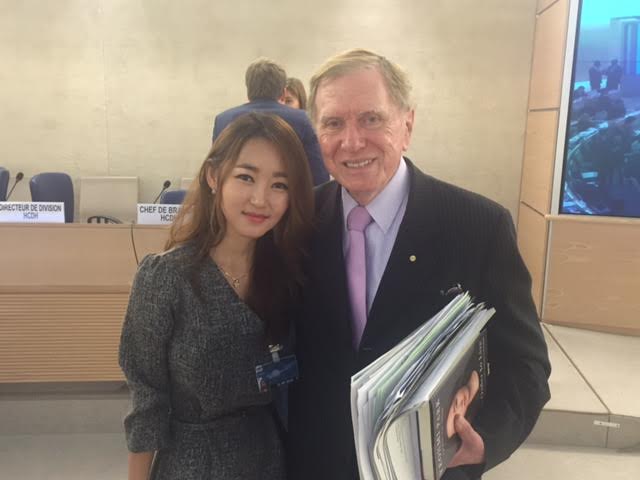 GENEVA, October 2, 2015 – Speaking last week in Geneva on behalf of the non-governmental human rights group UN Watch, North Korean survivor and human rights activist Yeonmi Park addressed a United Nations Human Rights Council debate on the country from which she escaped, one week before the publication of her memoir, In Order to Live (Penguin).

Ms. Park’s inspirational words during the UN panel discussion contrasted sharply with the harsh rhetoric from her former oppressor, the North Korean government.

North Korea, according to a UN summary, said the panel discussion “followed ill-minded political objectives” and belonged to a “conspiracy of the hostile forces led by the United States pursuing a plot against the Democratic People’s Republic of Korea.” The regime said the panel was “slander,” marked by “politicization and double standards,” and “confrontational.”

Cuba said the panel violated the North Korean people’s “right to peace” and “right to development.”

UN Watch then gave the floor to Yeonmi Park: 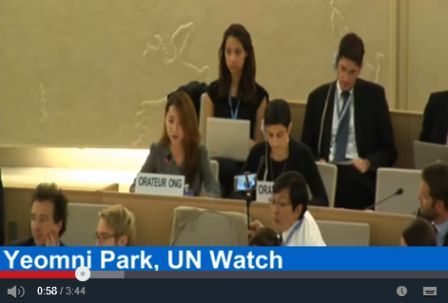 “Thank you Mr. President. My name is Yeonmi Park. I’m 21 years old. I was born in 1993 in North Korea, an unimaginable place, with so much suffering and no freedom.

As a free person here today, it means a lot to me to deliver this statement on behalf of UN Watch.
Eight years ago I escaped from my homeland by scrambling across the frozen river that divides North Korea and China. I knew that if I stayed behind I would die – from starvation, from disease, from a labor camp. My hunger was unbearable, and I hoped to find food and work in China.
Instead the first thing I saw in China was my mother raped by a Chinese broker. I myself was sold for $260 at the age of 13 as a child bride to a human trafficker, and my mother was sold for $65.
I spent two terrible years hiding from Chinese police who would have sent me back to North Korea.
Finally, I made another dangerous escape across the Gobi Desert into Mongolia. It was a freezing cold, black night, and we couldn’t use our compass. So we followed the stars north, walking and crawling to freedom.
North Korea attempts to cast doubt on any criticism of its evil acts. They have released propaganda videos calling me a “human rights propaganda puppet.” But I am here to tell you I am speaking from my heart. And my heart breaks for my relatives still in North Korea, who are unjustly suffering because I speak out against the regime.
No dictatorship gives up power without a demand. We must demand that North Korea stop starving and oppressing its own people and respect their human rights.
I heard this: “Never say there is no hope.” It’s the song of the Jewish Resistance fighters who fought against the most inhuman tragedy. And I have hope. I believe some day North Korean people will be free like all of us here today.
Thank you so much for listening and bringing hope to my people. I believe that together, we can change North Korean lives.”

UN Watch is one of the leading human rights groups at the UN regarding North Korea, working closely with North Korean dissidents. 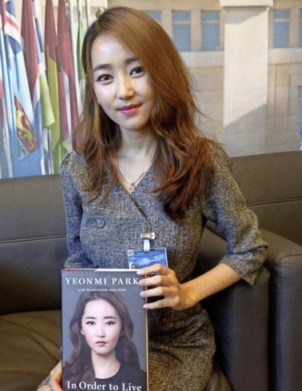