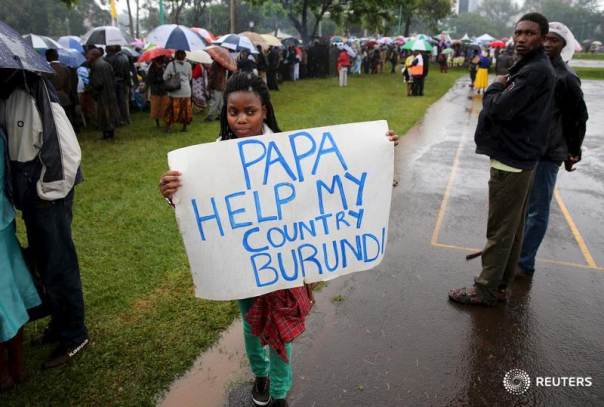 A woman holds a banner written “Papa Help My Country Burundi” before a mass by Pope Francis.

GENEVA, December 17, 2015 – About to speak at today’s special UN Human Rights Council session on Burundi, UN Watch will deliver the following oral statement before the UNHRC plenary this afternoon:

UN Watch commends the United States for taking the initiative to hold today’s special session and to speak out for the men, women and children of Burundi who—as British Ambassador Matthew Rycroft warned last month at the Security Council— could face “possible genocide.” Many others have echoed this alarm.

We pointed to the Burundi government’s gross human rights abuses, including the excessive force by Burundi police during demonstrations earlier this year, which claimed the lives of 58 people.

We spoke about the August 3rd attempt to silence civil society, namely, the shooting of human rights activist Pierre Claver Mbonimpa—who is with us today in the Council chamber.

Sadly, however, despite our entreaties, the UN went ahead and — by an overwhelming majority of more than 80 percent — elected Burundi to the Human Rights Council.

Inexcusably, instead of putting Burundi’s leaders on notice, the UN sent them a message of impunity.

Only days later, Burundi’s president delivered an infamous speech threatening violence against opponents; while the president of the Senate said “you have to pulverize, you have to exterminate.”

On November 6th, the son of Mr. Mbonimpa was arrested, and was soon found dead.

Hundreds of others have been killed; more than 200,000 have fled and become refugees.

Today, UN Watch calls for an amendment to the draft resolution that has been circulated.

We urge the Human Rights Council to invoke Article 8 of Resolution 60/251, and to rescind Burundi’s absurd and offensive membership before it begins on January 1st.

And we call on the United Nations to apologize to the victims — for having elected this gross human rights abuser in the first place.