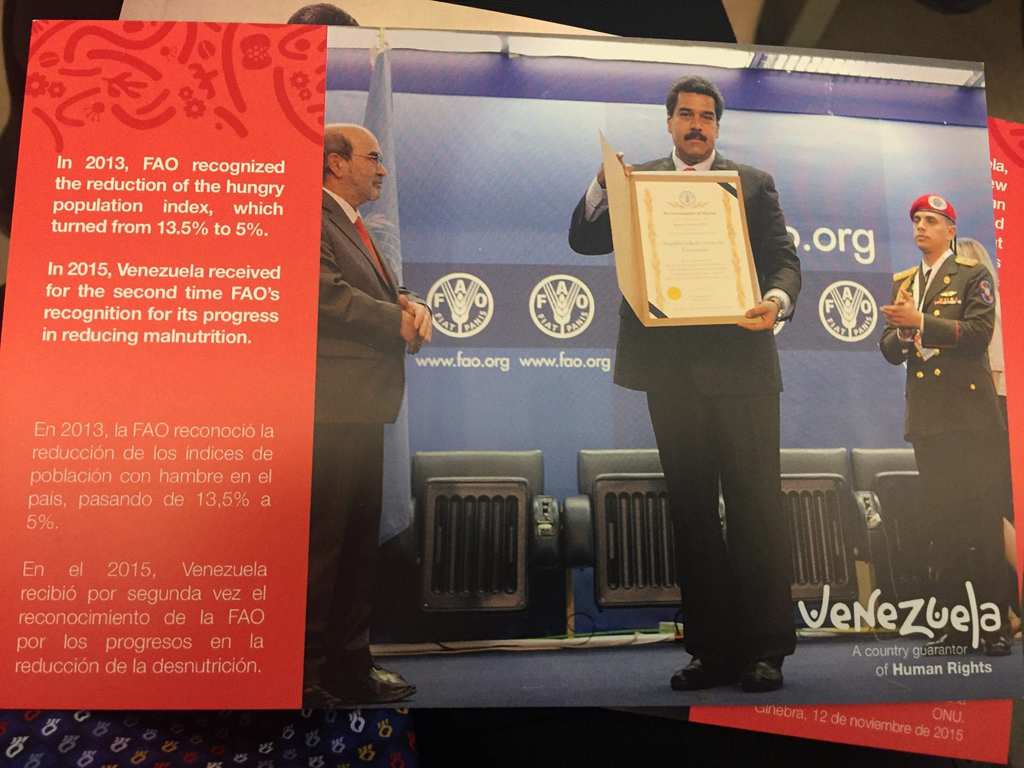 Outside the UNHRC chamber where its record was being reviewed, Venezuela put on a large photo exhibit
showing its alleged commitment to human rights, including a photo (above) of President Nicolas Maduro
winning a UN prize for combating hunger — even though his people are now desperately struggling for food.

GENEVA, Nov. 1, 2016 – UN chief Ban Ki-moon and human rights high commissioner Zeid Hussein are being called on by UN Watch to investigate how their officials allowed Venezuela to commit “fraud on a massive scale” to influence today’s UN review of the country’s human rights record by using hundreds of “front groups” to submit comments favorable to the regime, the watchdog group reported.
While an astronomical amount of 519 supposedly non-governmental organizations submitted comments for Venezuela’s review, only 54 commented on Uganda, 26 on Syria, 23 for South Sudan, and 20 on Zimbabwe, according to a new report published by UN Watch.
Although critiques by genuine NGOs do appear, they are overwhelmed by an unprecedented amount of submissions by fraudulent NGOs that, if they do exist, are either controlled by the government of Venezuela, or by its allies Cuba and Bolivia. 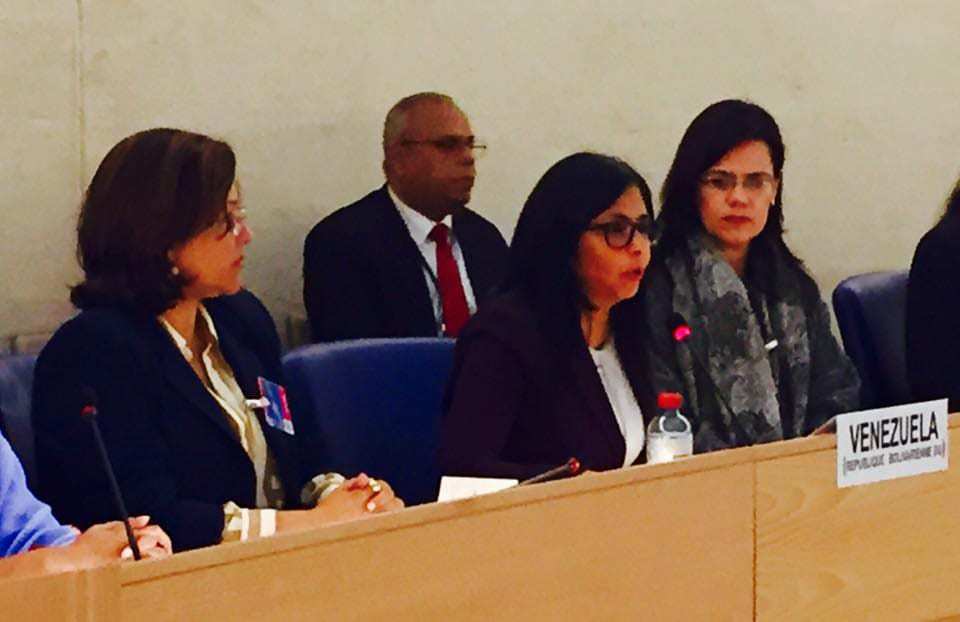 This is fraud committed on a massive scale, as Venezuelan foreign minister Darcy Rodriguez (above) appeared before the UN Human Rights Council this morning in Geneva, Switzerland, to present her government’s case. The UNHRC audits each nation every five years for its Universal Periodic Review (UPR).
Venezuela used hundreds of front groups to hijack the United Nations database and compilation summary of NGO submissions, and turn it into a propaganda sheet for the regime of President Nicolas Maduro.
The UPR is not binding on anyone but does have an impact because it’s a a podium which shapes the way people think and it is a source of legitimacy.
“Among the 500 groups absurdly praising Venezuela’s alleged human rights accomplishments are the Bolivian Baseball Association, the Cuban Federation of Canine Sports, and the ‘Association for Obvious Things,’ a group in Slovenia that hailed Venezuela’s record on combating hunger,” said the UN Watch report.
“The result is that the review today of Venezuela’s human rights record is being conducted based on a massive amount of manifestly false information,” concludes the report. 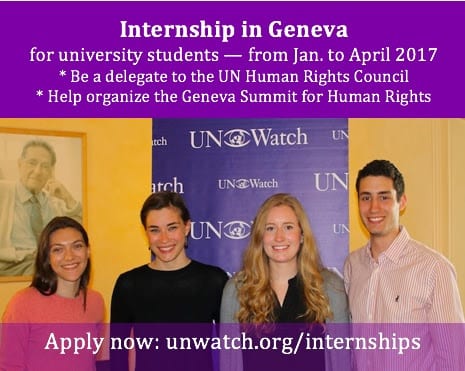 Under UN rules, the world body is only supposed to gather submissions that provide “credible and reliable information.” The report calls on UN Secretary-General Ban Ki-moon and High Commissioner for Human Rights Zeid Hussein to investigate “how and why their officials failed to screen out submissions that clearly do not meet this standard.”
Ban Ki-moon and High Commissioner Zeid should declared Venezuela guilty of contempt for the Human Rights Council on which it sits.
UN Watch has often criticized the Council itself for electing non-democracies, including Venezuela itself last year, as members.
On Friday UN Watch slammed the re-election of Saudi Arabia, China and Cuba to the Council. “Electing the Saudis to the UN’s highest human rights body like making a pyromaniac into the fire chief,” said UN Watch executive director Hillel Neuer.
During the UNHRC meeting today on Venezuela, Syria, North Korea, Iran, and the Palestinians all praised Venezuela, while Western nations criticized its abuses and lack of democracy. All the comments and Venezuela’s responses are eventually added to the UPR.
The UN Watch report, titled “Fraud on the UN: Venezuela’s Corruption of its 2016 UPR Human Rights Review,” gives 20 examples of praise heaped by the NGOs on the socialist regime.
Among the “NGOs” were several organizations controlled by the Cuban Communist Party, and bearing no obvious expertise on the human rights claims in their submissions, such as the Cuban Association of Animal Production, the Cuban Federation of Underwater Activities, the Cuban Society for Philosophical Investigations, and the Cuban Society for Urology.
Also commenting were numerous Bolivian groups including the Bolivian Association of Plastic Arts.
According to the UN compilation document, “a total of 238 organizations” welcomed “the reinforcement of people’s power and popular governance” in Venezuela. Likewise, a group called Desarrolo Humano Integral stated that in Venezuela “there is freedom of religion, belief, expression of ideas and thought, association, assembly and peaceful demonstration.”
Yet the truth is that regime routinely arrests dissidents for the crimes of peaceful demonstrations. Democratic opposition leaders like Caracas Mayor Antonio Ledezma and Leopoldo Lopez have had their freedom taken away.Click here for the powerful testimony by Antonietta Ledezma.
The UN report quotes 21 organizations saying that “progress had been made in adopting health legislation to ensure compliance with constitutional provisions prescribing free, high-quality health services for all.” In reality, the state of health in Venezuela is a catastrophe, with people desperate for basic medicines.
For full report by UN Watch, click here