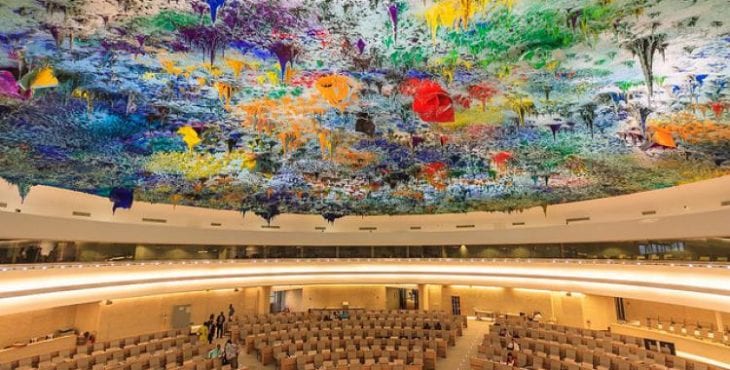 In the current March 2019 session of the UN Human Rights Council, while Iran will be the subject of only one short and technical resolution, which includes no condemnation, Israel will be targeted by no less than five biased resolutions. Meanwhile, there will be zero resolutions on China, Saudi Arabia, Zimbabwe, Turkey, Pakistan, Cuba and most other of the world’s worst violators.

In addition, Israel will be attacked on March 18th for an entire day—the only country in the world singled out under a special agenda item—in the form of seven anti-Israeli reports.

“Human rights in the Occupied Palestinian Territories, including East Jerusalem”
Extract: “Expresses grave concern at the restrictions imposed by Israel that impede access of Christian and Muslim worshippers to holy sites in the Occupied Palestinian Territory, including East Jerusalem, and calls upon Israel to include guarantees for nondiscrimination on grounds of religion or belief as well as for the preservation and peaceful access to all religious sites… Demands that Israel, the occupying Power, cease immediately its imposition of prolonged closures and economic and movement restrictions…  Condemns all acts of violence, including all acts of terror, provocation, incitement and destruction, especially the excessive use of force by the Israeli occupying forces against Palestinian civilians, particularly in the Gaza Strip, where bombardment of populated areas has caused extensive loss of life and a vast number of injuries, including among thousands of children and women, massive damage and destruction to homes, economic, industrial and agricultural properties, vital infrastructure, including water, sanitation and electricity networks, religious sites and public institutions, including hospitals and schools, and United Nations facilities, and agricultural lands, and large-scale internal displacement of civilians, the excessive use of force by the Israeli occupying forces against Palestinian civilians in the context of peaceful protests in the West Bank…”
“Right of the Palestinian people to self-determination”
Extract: “Recalling the conclusion of the Court, in its advisory opinion of 9 July 2004, that the construction of the wall in the Occupied Palestinian Territory, including East Jerusalem, together with measures previously taken, results in serious violations of international law, including the forcible transfer of Palestinians and Israeli acquisition of Palestinian land…”
“Israeli settlements in the Occupied Palestinian Territory, including East Jerusalem, and in the occupied Syrian Golan”
Extract:
“Condemns the continuing settlement and related activities by Israel, including the construction and expansion of settlements, the expropriation of land, the demolition of houses, the confiscation and destruction of property, the forcible transfer of Palestinians, including entire communities, and the construction of bypass roads, which change the physical character and demographic composition of the occupied territories, including East Jerusalem and the Syrian Golan… Also expresses its grave concern at… the operation by Israel of a tramway linking the settlements with West Jerusalem, which is in clear violation of international law and relevant United Nations…”
“Human rights in the occupied Syrian Golan”
Extract: “Expresses grave concern about the Israeli practices in the occupied Syrian Golan… highlighting the arbitrary arrests of Syrians, the lack of due process guarantees afforded to Syrians and the unlawful mine-laying practices of the Israeli occupation forces in the occupied Syrian Golan, expresses regret at the noncooperation of Israel with the Office of the United Nations High Commissioner for Human Rights, and deplores the Israeli settlement expansion plans in the occupied Syrian Golan and Israeli practices affecting the human rights of the Palestinian people and other Arabs of the occupied territories mentioned in the report…  Further calls upon Israel to desist from imposing Israeli citizenship and Israeli identity cards on the Syrian citizens in the occupied Syrian Golan, and to desist from its repressive measures against them and from all other practices that obstruct the enjoyment of their fundamental rights and their civil, political, economic, social and cultural rights…”
“Ensuring accountability and justice for all violations of international law in the Occupied Palestinian Territory, including East Jerusalem” (not submitted yet)
Extract (of expected text, based on 2018 version):
“Condemning all violations of human rights and of international humanitarian law, and appalled at the widespread and unprecedented levels of destruction, death and human suffering caused in the Occupied Palestinian Territory, including East Jerusalem…  Deploring the non-cooperation by Israel with all Human Rights Council fact-finding missions… Emphasizes the need to ensure that all those responsible for violations…. are held to account through appropriate, fair and independent national or international criminal justice mechanisms…”