GENEVA, March 18, 2019 – Member of European Parliament Péter Niedermüller today addressed the Rally for Equal Rights at the United Nations— see quotes below.
For links to other speakers’ quotes, videos, photos, livestream and more, click here.
Quotes on the UNHRC inquiry:

Quotes on standing against anti-Semitism:

Quotes on standing up for Israel:

Full prepared remarks:
I’m proud to stay here today as a Hungarian Member of the European Parliament—the EU’s highest democratic body. I am here today as a member of the European Parliament’s Delegation for Relations with Israel. And I’m here as the vice president of the center-left oppositional party in Hungary, the Democratic Coalition. I’m here to express my support, my friendship, and my love to Israel.
I came this afternoon alone, but I am not alone, there are many friends of Israel, from across the political spectrum in the European Parliament: people who understand that support for Israel is not only a political issue – it is not a left or right issue – it is our moral responsibility.
Some of my colleagues on the left side of the Parliament do not share this understanding, however. They are blinded by old-fashioned leftist taboos and stereotypes. They have rather one-sided views born of prejudice, of insufficient knowledge and objectivity, and these are only fueled by uninformed passions, and distortions of the media.
We see the same, and in fact worse, here, at the United Nations Human Rights Council. And this is deeply, deeply disappointing. Israel is systematically singled out for criticism. Israel is the only country with its own agenda item, and more resolutions against it than the resolutions against some of the world’s worst human rights abusers all together. This is not just and not fair.
Today especially, we see the biased report of the Commission of Inquiry into Israel’s intervention at the Gaza border against Hamas-backed protesters earlier this year. I say to you today, what I said in the European Parliament, when the debate on the situation in the Gaza Strip came up for discussion:
Hamas – which the European Union rightly deems a terrorist organization – encouraged protesters to break through the border fence and to carry weapons, including homemade explosive devices; Hamas sent women and children near the border fence and didn’t allow Israeli aid transport in Gaza on 11 May and on 16 May. This is white feather. Hamas didn’t do anything to keep the demonstrations peaceful, but rather agitated for violence. Hamas is a political organization of hate. And we all know what consequences political hatred can have. So, to place responsibility on Israel’s shoulders alone is more than an error, it is a serious distortion of reality: As all states, Israel has the right to defend its borders. The responsibility of Hamas for the death of Palestinian civilians is therefore undeniable.
To fail to understand this, to fail to understand the complexity of the situation on the ground, is politically dishonest and ethically compromising.
Hamas has proven that it is unable and unwilling to work towards peaceful life in Gaza. Hamas is not interested in peace, accords or governing, they are interested only in hate-mongering. This is hugely in contrast with Israel, a real, lively and dynamic democracy.
As a center-left politician, it worries me that many right-wing populists across the world today lay claim to the protection of the Jewish State. I’ve seen this up close in my own country of Hungary – where good relations with Israel are used to shield how the government utilizes anti-Semitism for its political purposes, the systematic rewriting the history of Holocaust in Hungary, and the hate speech of state propaganda. Antisemitism is the shame of modern civilization, and it does not matter if it’s left- or right-wing antisemitism, we have to take a stand against it. Just as we have to stand with the state of Israel and only level criticism towards it where we would find fault with any other state.
That is why it is a moral imperative for us all to not allow for Israel to be a partisan issue, to reaffirm our commitment to the protection of the one Jewish State and to fight for constructive solutions for lasting peace. That is why I stand together with you to say Enough is Enough, end the anti-Israel bias. And that’s why I say once more, Enough is Enough! 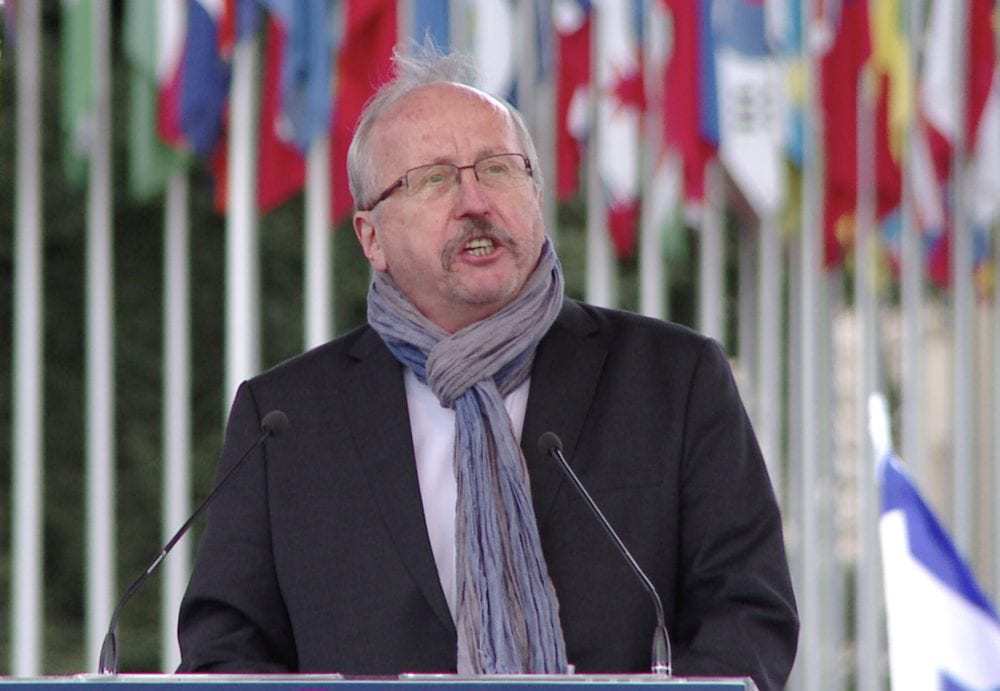