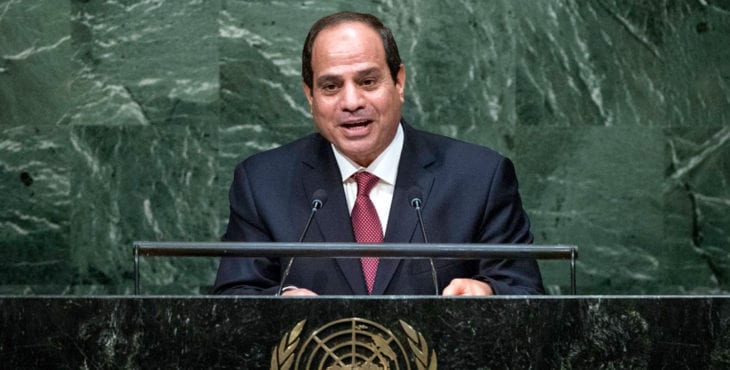 Egyptian President Abdel Fattah al-Sisi addresses the plenary at the 70th session of the General Assembly.

“This is an Orwellian agency, pretending to be a commission for human rights, when in fact its purpose is to shield Cairo’s repressive regime from legitimate scrutiny of both domestic and international human rights activists, and to hide its gross and systematic rights abuses.”

“The commissioners are not independent monitors but the very opposite: military, intelligence and other regime officials who oversee a police force accused of torture and arbitrary arrests.”

“Because Egypt is a member of the United Nations Human Rights Council, and therefore legally obliged to uphold the highest standards in the promotion and protection of human rights, we urge UN rights chief Michelle Bachelet to hold the al-Sisi regime accountable for this worrying move, and to remind Egypt of its international obligations.”

“The UN needs to tell Egypt that at a time of escalating allegations of the regime’s arbitrary detentions and suppression of free speech, Cairo should be investing its energies in combating its own abuses, instead of fighting those who courageously point them out.”

“Regrettably, given that the UN Human Rights Council itself is composed of numerous serial rights abusers such as Egypt, China, Cuba, Saudi Arabia, Qatar and Venezuela, it’s entirely possible that the idea of subverting human rights agencies is something that Egypt learned from the UN itself.”

Egyptian envoy boycotts UN’s new monitor on anti-gay violence; “contrary to my convictions and the values I stand for”