Amnesty International, renowned for its support of persecuted minorities worldwide, should apologize for displaying contempt for the persecution and suffering of Egyptian Jewry — who numbered 80,000 in 1948, now reduced to barely 20 individuals today — by “liking” a bizarre article that questioned their plight, entitled “Were Egypt’s Jews really expelled?”

“This is uncharacteristic behavior for a self-defined anti-racist group, and I urge Amnesty to explain its actions and apologize,” said Hillel Neuer, executive director of UN Watch, a Geneva-based non-governmental human rights organization. 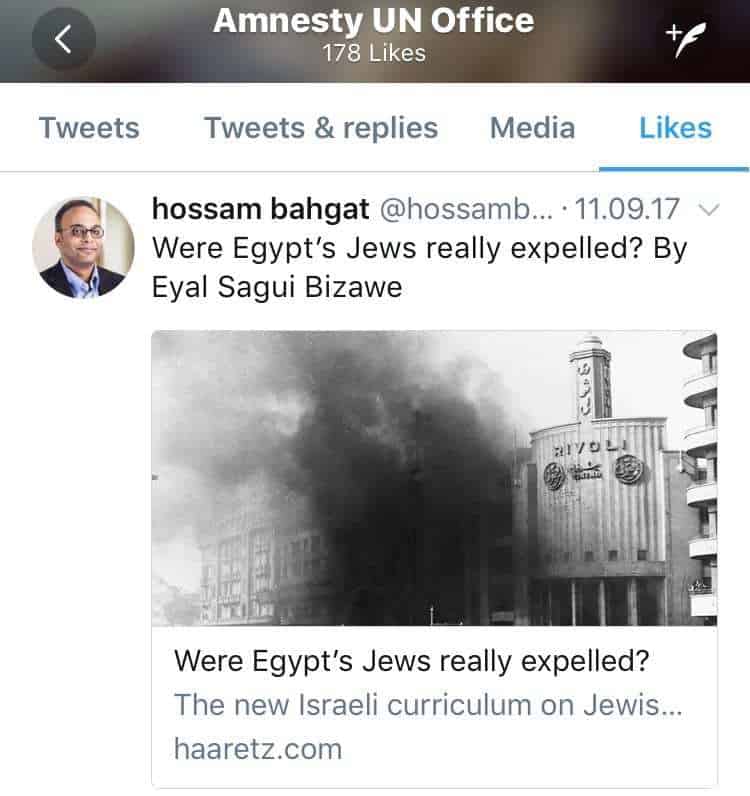 The article shared by Amnesty’s UN office, according to a response published today (“Our Passports Were Stamped ‘Exit, With No Return’: The Real Story of How Egypt Expelled Its Jews“) by Israel Bonan, an Egyptian Jew and former adjunct professor at Simmons College, was “mocking,” “vulgar,” and showed an “unworthy lack of empathy.”

Out of 178 likes from the Amnesty UN Twitter account, none other questioned claims of racial persecution or any other human rights violation.

Amnesty’s UN office liked a tweet of the article by Egyptian “human rights” activist Hossam Bahgat, who has also tweeted about the “Zionist matrix of power.”