Egyptian envoy boycotts UN's new monitor on anti-gay violence; "contrary to my convictions and the values I stand for" 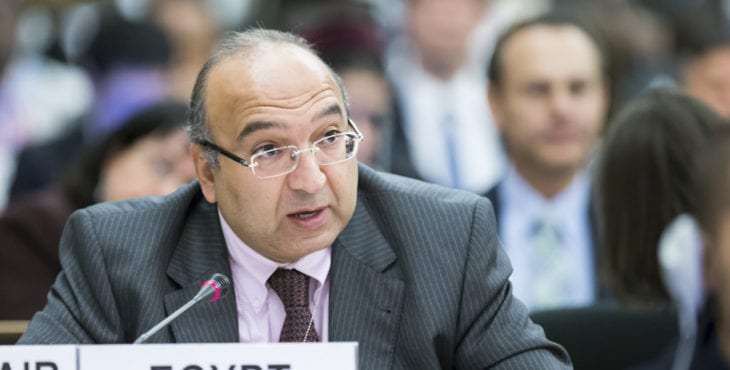 Amr Ramadan, Egyptian ambassador to the UN Human Rights Council: protecting gays from violence and discrimination is “contrary to my convictions and the values I stand for.”
GENEVA, Aug. 17, 2016 – A 5-member UN human rights committee announced that a Thai law professor is its choice to be the UN’s first monitor against anti-gay violence, yet an Egyptian diplomat on the panel is boycotting the mandate.
In a report circulated by the president of the UN human rights council (UNHRC), its Consultative Group—comprised of five diplomats who evaluate candidates for UNHRC expert positions—named Vitit Muntarbhorn, a Bangkok law professor who has held prior UN rights posts, as the world body’s first expert on protection against violence and discrimination based on sexual orientation and gender identity.
However, the UN report reveals that Amr Ramadan, Egypt’s ambassador to the UNHRC, refused to participate in the selection process. He detailed his reasons to the council president, in a letter obtained by UN Watch (text below, PDF original here).
According to the Egyptian representative, a mandate on protecting gays from violence and discrimination is “contrary to my convictions and the values I stand for,” “beyond universally recognized human rights and fundamental freedoms,” and shows “utter disregard to the principle of universality of internationally agreed human rights.”
Ramadan reaffirmed that the OIC—the powerful Islamic bloc comprised of 56 UN member states and the Palestinian Authority—”shall boycott this mandate and shall not recognize its creation nor cooperate or interact with it in any form.”
Human rights activists decried the OIC’s boycott.
“The Islamic states’ boycott of a mandate to protect gays from being attacked or killed is morally indefensible,” said Hillel Neuer, executive director of UN Watch, a Geneva-based human rights group.
“Moreover, for those states which are members of the Human Rights Council—like Saudi Arabia, Qatar, and UAE—their refusal to cooperate with the mandate is an express breach of their obligations.”
“If Egypt is officially boycotting a UN human rights expert, it should fully resign from the committee that selects them,” said Neuer.

Letter from Egyptian Ambassador Amr Ramadan to H.E. Ambassador Kyonglim Choi, President of the Human Rights Council
Geneva, 29 July 2016
Your Excellency,
I am addressing you with reference to the appointment of an Independent Expert on sexual orientation and gender identity pursuant to Human Rights Council’s resolution 32/2 adopted by recorded vote on 30 June 2016 and in the context of my current membership of the Consultative Group of the Human Rights Council, serving in my personal capacity. In this connection, I am keen to highlight the following points:
– This mandate was created at the backdrop of unprecedented divisiveness and polarization with a level that has never been associated with the creation of any other mandate. It is noteworthy that the paragraphs relevant to the creation of the mandate were retained by a recorded vote of 19 to 17 and 6 abstentions, not to mention that the resolution as a whole was modified by an unprecedented number of accepted amendments. These very specific circumstances significantly compromise the legitimacy of the created mandate;
– Contrary to the announced explanation that this mandate will be restricted to combating violence and discrimination, which are already addressed through other resolutions and existing mandates, it is crystal clear that this resolution and the mandate emanating from it are designed for codifying new and distinct set of rights and protection for a specific group of individuals. For this reason, I am of the firm conviction that the creation of this mandate is in Ulta Vires to international human rights law and is beyond universally recognized human rights and fundamental freedoms in a manner that amounts to utter disregard to the principle of universality of internationally agreed human rights as outlined in international human rights law[1];
– The announced formal position delivered on 1st of July 2016 on behalf of the OIC group (except Albania), at the explanation of vote after the vote on resolutions and decisions adopted under agenda item 3 during the 32nd session of the Human Rights Council, reiterated that OIC Member States shall boycott this mandate and shall not recognize its creation nor cooperate or interact with it in any form or format.
Bearing in mind the aforementioned considerations, I would like to bring to your kind attention that I have decided not to take part at the work of the Consultative Group relevant to its upcoming recommendation on the selection of this mandate-holder. I find it difficult to engage in an exercise which is contrary to my convictions and the values I stand for.
My decision in this regard is also in line with Pp4 bis of the said resolution (32/2) that stressed the need to maintain joint ownership of the international human rights agenda and to consider human rights issues in an objective and non-confrontational manner, as well as Pp4 Quart on “Reiterating the importance of respecting regional, cultural and religious value systems as well as particularities in considering human rights issues;”, Pp4 Quint on “Underlining that fundamental importance of respecting the relevant domestic debates at the national level on matters associated with historical, cultural, social and religious sensitivities;”, Pp4 Sept where the Council expressed concern at “any attempt to undermine the international human rights system by seeking to impose concepts or notions pertaining to social matters, including private individual conduct, that fall outside the internationally agreed human rights legal framework, taking into account that such attempts constitute an expression of disregard for the universality of human rights;” and Pp4 Octi on “Underlining that this resolution should be implemented while ensuring respect for the sovereign right of each country as well as its national laws, development priorities, the various religious and ethical values and cultural backgrounds of its people and should also be in full conformity with universally recognized international human rights;”.
Allow me, Mr. President, to take the liberty to inform my fellow colleagues at the Consultative Group and Member States with my decision in this respect.
I continue to look forward for future opportunities for cooperating with you in relation to the Consultative Group and issues of mutual interest and concern and on the basis of genuine and constructive dialogue towards the global protection of universally recognized human rights.