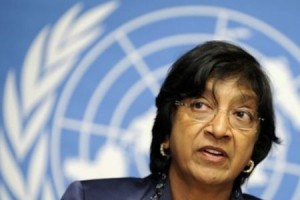 GENEVA, May 14, 2012 — After Ban Ki-moon’s announcement today that he supports a two-year extension for rights commissioner Navi Pillay, a non-governmental watchdog group says that the decision was made — pending the UNGA’s rubber stamp — without due public consultation or a healthy discussion of her four-year record on the job.

“A global and high-profile position that makes demands of transparency and accountability from the world’s governments should set an example for others,” said Hillel Neuer, an international lawyer and director of the Geneva-based UN Watch. “But we didn’t see that today.”

According to UN Watch’s study of Pillay’s record from 2008 to 2010, there are concerns about her ability to prioritize the most urgent situations. While the second part of the study, concerning 2010-2012, is likely to reveal improvements, the data from Pillay’s first two years as UN High Commissioner for Human Rights show as follows:

• UN Watch examined all statements by UN High Commissioner for Human Rights Navi Pillay published on the UN website between September 2008 and June 2010.During this period, Ms. Pillay failed to address most of the world’s worst abusers.

• She made no statement on the human rights situations of 146 countries. She failed to voice any concern for victims in 34 countries rated “Not Free” by Freedom House—meaning those with the worst records, and the most needy victims.

• Ignored Iran: Ms. Pillay failed to issue any public statement in response to the well-documented violence against demonstrators in Iran following the June 2009 presidential elections. Her first comment appeared three months after initial reports and video evidence of government-backed paramilitary forces arbitrarily arresting, beating and killing protestors were released. Moreover, her call on the Iranian government to “release those detained for peaceful protest, to investigate reports of their ill-treatment, and to ensure respect for human rights” was made only as part of her traditional opening speech at the UN Human Rights Council session in September 2009. She did not give a press conference and chose not to issue a dedicated statement on the matter.

• Soft on Gulf: In an “unprecedented effort to engage” with the Arab countries, Pillay made a 10-day tour of the six Arab countries comprising the Gulf Cooperation Council (GCC) from April 17, 2010 to April 26, 2010. Public statements during or in reference to this tour were largely positive and benign. While the High Commissioner did raise some human rights concerns, the discussion of human rights situations in those countries was largely muted. In instances when Pillay raised a human rights concern, she favored praising the country’s progress over naming recorded abuses or highlighting ongoing violations.

• Ignored Mounting Abuses in Syria: During this period, the Syrian government continued to repress minorities and restrict freedom of expression and assembly despite promises of greater transparency by President Bashar al-Assad. In July 2010, the military trials of two renowned human rights lawyers, Haytham al-Maleh and Muhanad al-Hasani resulted in sentenced convictions for criticizing the Syrian authorities on human rights grounds. In March 2010, Syrian military stormed the home of and detained Kurdish leader Abdel Hafez Abdel, and detained journalists, bloggers and writers for exposing government abuse and corruption. However, the High Commissioner did not respond to any of these events, and over the course of her tenure, did not make any public comments about the state of human rights in Syria.