GENEVA, July 21, 2014 – Geneva-based human rights group UN Watch today called on UN leaders to condemn what it called a “global epidemic” of anti-Semitic attacks, spiraling from Paris to Ankara, in wake of the Israeli army’s Gaza operation to stop rocket fire against its cities. In Paris, Jewish-owned shops were burned and pillaged last night during a second violent anti-Israel demonstration in two days. Riot police held back a mob of youths who tried to attacks two synagogues in the suburb of Sarcelles. 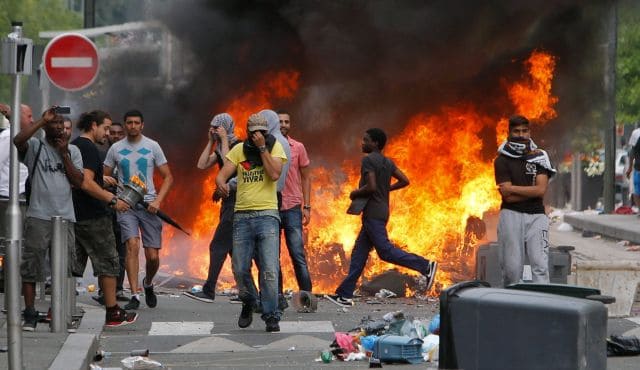 GENEVA, July 21, 2014 – Geneva-based human rights group UN Watch today called on UN leaders to condemn what it called a “global epidemic” of anti-Semitic attacks, spiraling from Paris to Ankara, in wake of the Israeli army’s Gaza operation to stop rocket fire against its cities.

In Paris, Jewish-owned shops were burned and pillaged last night during a second violent anti-Israel demonstration in two days. Riot police held back a mob of youths who tried to attacks two synagogues in the suburb of Sarcelles.

“When you menace synagogues and when you burn a grocery because it is Jewish-owned, you are committing anti-Semitic acts,” said French interior minister Bernard Cazeneve today.

“Given the global nature of the contagion, it’s vital that we hear the voice of the UN’s leadership and of its human rights officials, including Ms. Pillay and all of the relevant human rights special procedures and treaty bodies,” said Hillel Neuer, executive director of the Geneva-based human rights group.

UN Watch called on Ban and Pillay to echo the words of the OSCE’s 2004 Berlin Declaration against anti-Semitism, which affirmed that “international developments or political issues, including those in Israel or elsewhere in the Middle East, never justify anti-Semitism.”

“Just as the UN has rapidly condemned anti-Islamic films, it must also rapidly condemn physical assaults and threats against Jews, and vandalism of their businesses, homes, and places of worship,” said Neuer.

“For now, regrettably, we’re hearing silence from the UN.”

PARIS, July 11 – Unknown assailants hurled a Molotov cocktail at a synagogue in Aulnay-sous-Bois, a suburb of Paris, France.

BOSTON, July 11 – Pro-Israel student demonstrators reported being physically assaulted by anti-Israel demonstrators, who also chanted “Jesus killers.” One of the assaulted students pressed charges on Saturday at the Boston Police Department against a woman related to the incident.

CASABLANCA, July 11 –  A young man beat up Moroccan rabbi Moshe Ohayon on Friday as he was walking towards his synagogue. The unidentified assailant asked, “Are you Jewish? What’s the Tsahal (Israeli army) doing to our brothers?” the rabbi reported. Ohayon said he was punched to the ground and then pummeled until he lost consciousness.

PARIS, July 13 – Protesters attacked two synagogues in Paris on Sunday as pro-Palestinian protests turned violent. Worshippers barricaded themselves inside the Synagogue de la Roquette as demonstrators tried to storm the building with bats and chairs. Some protesters were reportedly chanting “Death to Jews!” during the violence. At least three Jews were taken to the hospital in Paris.

LONDON, July 14 –A giant swastika was painted outside a Jewish family’s house in the London suburb of Hendon in the middle of the night.

NEW YORK, July 14 –Three men arrested for vandalizing a religious seminary and nearby house in New York City. The suspects allegedly spray-painted hate statements on a building under construction in Brooklyn’s Borough Park neighborhood before breaking into a nearby seminary in the Orthodox Jewish area, spray-painting a swastika on a bus parked outside.

FRANKFURT, July 14 – Anti-Israel demonstration in Frankfurt erupts into violence, with protesters tossing stones at the police. A protester carried a sign that read, “You Jews are beasts” and several had banners comparing Prime Minister Netanyahu to Adolf Hitler.

ANTWERP, July 16 – Dozens of men at an anti-Israel demonstration in Antwerp shouted slogans about slaughtering Jews. The Belgian League Against Anti-Semitism filed a complaint for incitement to violence against participants and organizers of the Antwerp demonstration, dozens of whom were recorded making the calls.

BERLIN, July 17 – Anti-Semitic slogans were chanted during a protest against Israel in Berlin. The protesters reportedly waved Palestinian flags and yelled, “Jews, Jews, cowardly pigs, come out and fight!” In response to the anti-Semitic attack, the American Jewish Committee in Berlin filed a police report and called on the German parliament to protect the Jewish residents of the city.

ANKARA, July 17-19 – Turkish Prime Minister Recep Tayyip Erdogan accusedIsrael of “barbarism that surpasses Hitler.” Local media reported an explosion of pro-Hitler tweets and some liberal Turks reacted with outrage on Twitter when a pro-government newspaper printed a Hitler-themed crossword. Drawing comparisons of contemporary Israeli policy to that of the Nazis is a classic form of contemporary anti-Semitism, according to the U.S. State Department.