VAN SUSTEREN: “UNRWA — you’ve been very vocal in reducing the amount of contributions the United States makes, and this has to do with what goes on in much of the refugee camps in the Palestinian part of the world. What’s the end point on this?”

HALEY: “Well, I think there’s a couple of things. We mentioned to UNRWA multiple times it needs to be reformed.”

VAN SUSTEREN: “Reform, meaning? Because I know that Israel is unhappy with it thinking that it’s anti-Israeli and that it’s a fertile breeding ground for terrorism against Israel. Is the reform that way, or is the reform in sort of the bureaucracy and how it’s run and how it distributes the money, aid, to the camps?”

HALEY: “I think we’re looking at overall reform. When we say that we’re basically lookingat the fact that you’ve got, basically they’re considering any Palestinian as a refugee. Looking at the fact that what they’re teaching in schools is not necessarily the right way to have things run. It is very top heavy from an administration standpoint. But also, the other side of that is again, we’re not going to reward bad behavior. Here you’ve got the Palestinians who are basically saying they’re going to cut the U.S. out of the peace process. They’re saying they no longer want to have anything to do with us. They go and take us to the United Nations and try, basically, are very hostile in what they say and what they do. We’re not going to pay to be abused. It doesn’t make sense. What we’re going to say is, ‘Look, we want to help you, but first of all, you’ve got to show us that you’re going to reform something that’s broken.’ Secondly, ‘Don’t think that you can sit there and say hateful things about us and turn around and write you a check.’ It’s wrong in every turn. And so basically, what we’re saying is, ‘Look, you can have this little bit, but after that, we’re going to re-evaluate the relationship.’”

VAN SUSTEREN: “Again, I don’t mean to make this seem, like, simple — like I have all the answers. But the problem is when you do that, you’re also withholding money for refugee camps in nations like Jordan, which is already very financially pinched by having so many refugees in their country. So, we hurt one of our allies, and they’ve got enormous problems every time they don’t get the money from us to help. So, you know, it punishes not just the people who run UNRWA the way United States would like it, but nations like Jordan.”

HALEY: “Greta, why is the United States have to be the only one that bails out everyone? Why do we continue to give the money? You have 120 countries who voted against us, that could more than take up the level of debt that UNRWA has. Why is it the United States … we need to start being smart about the way we spend. We need to start really looking at foreign policy and seeing what the U.S. goals are and where we want to go. We want a peace process between the Israelis and the Palestinians. We want to make sure that that moves forward. By the Palestinians cutting us out of the peace process, it shows that they weren’t serious, that they’re not serious in truly getting to peace. So, we’re trying to make sure that if we’re going to spend taxpayer dollars, that we’re not spending it on something that doesn’t move U.S. interests forward.”

VAN SUSTEREN: “I guess my thought is, only Jordan has been an ally. And do we run the risk of creating that vacuum? And as I said, I don’t have the answers, but when we make some of these decisions … and even though I don’t like to spend a dollar to be insulted, I want to see every dollar spent well in my personal businesses, but do we run the risk that we hurt a nation who has been our ally and been so important in that region to us by making decisions like this?”

HALEY: “But that’s assuming that UNRWA is all we do. We actually… I not only went to Jordan, I also went to Turkey. We met with their governments. We brought them back and met with the secretary-general in the UN to see how we shift money to better help those host countries, because they’re doing an amazing job with Syrian refugees. So, we do a lot. UNRWA’s one part of it, but we fund a lot of different things. We recently worked with Jordan on how we can better help them with infrastructure. We turned around and worked with Turkey because they wanted help with education. Those things are going to continue to happen. We’re not holding that back, but what we are going to say is, ‘We aren’t going to blank-write a check to all of them. We’re going to start to prioritize where and who needs money.’ We have a great relationship with Jordan, that’s not going to change. We’re going to continue to fund them. We’re going to continue to assist them where they need it. It’s just not going to be through UNRWA.”

VAN SUSTEREN: “All right, Iran. Naturally, it’s on the top of all the agendas — the deal that the United States and other nations struck with Iran over their nuclear weapons program. Where do you stand on that?”

HALEY: “It was a bad deal. It was a dangerous deal. We basically gave them billions of dollars to turn around and say they weren’t going to do nuclear and allow them to do everything else, from ballistic missile testing to support on terrorism to, you know, continuing to move arms. It’s incredibly dangerous.”

VAN SUSTEREN: “If I take that premise that it’s a bad deal, and I have not read the whole deal, and I … but if the United States backs away from the deal, this was a deal that, you know, that our government made, our former president made. What does that tell another nation? Let’s jump ahead. Let’s say Kim Jong Un, that we want to sit down with him, we want to strike some deal with him. Why would he trust our word, if all of a sudden the next president comes along and says, ‘Well, that was a dumb deal.’”

HALEY: “Because if you don’t hold true to what your responsibility is, we don’t hold true to ours. Now is not, ‘We’ll give you the money, and we hope you act OK.’ Now is, ‘Look, if we’re going to be part of this deal, you have to keep your end of the bargain.’ And not only that, when you look at Iran, you have to also look at the fact, in whatcountry — in what part of the world — is it OK to send ballistic missiles and use them like they’re doing … ”

HALEY: “Like they’re doing with the Houthis in Yemen. In what way is it OK for them to support terrorism, which they continue to do around the region. In what way is it OK that they continue to support Assad? In the way that he has abused his people. I mean, in what way is all of that OK? That is not part of the deal. We’re in compliance with the deal, but what we’re saying is, ‘Look, we’re doing everything with the deal we’re supposed to, but all of these other actions …’ The EU needs to step up. We need to see the international community step up. And Iran needs to step up. And those things need to stop. That’s what you’re seeing the U.S. say, ‘If you want us to take your deal seriously, then you have to take all these other actions seriously.’”

HALEY: “That is violations of multiple Security Council resolutions. Those are …”

VAN SUSTEREN: “But not the – is that part of the Iran deal?

HALEY: “It’s not part of the Iran deal, which is why we’re in it. But it is absolutely violations of multiple UN resolutions, and we recently had a report that just came out that cited those violations. So that’s not us, that’s actually the United Nations came out and cited Iran for ballistic missile testing, arms sales, support of terrorism, all of those things. So we’re not just being one actor that’s saying this, we’re now showing the international community we still have things that are dangerous, and it’s not safe, and we have to do something about it.” 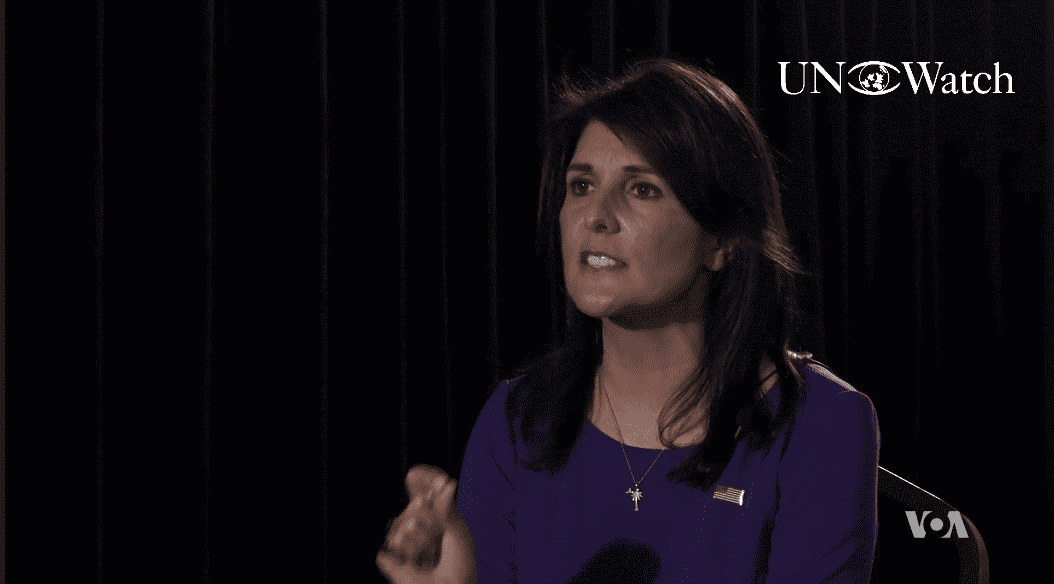