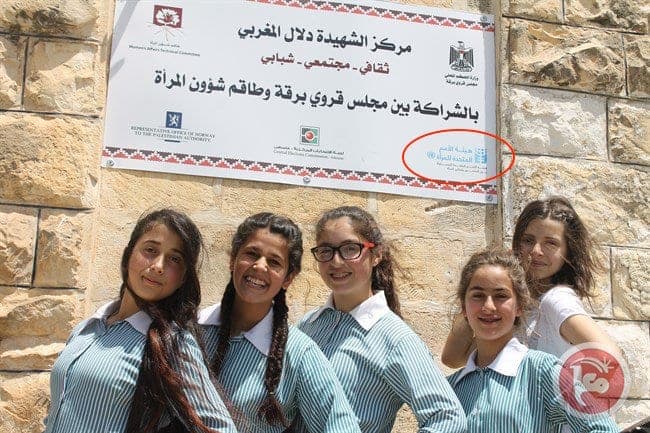 GENEVA, May 27, 2017 – Norway has frozen all new funding agreements with UN Women’s Palestinian office in wake of a youth centre built with Norwegian aid money that was named after a terrorist who participated in the killing of 12 children.
UN Watch is now calling on all donors to UN Women to follow Norway’s example, including top donors giving tens of millions to UN Women such as Sweden, Switzerland, Japan, UK, Australia, Finland, Netherlands, Denmark, USA, Canada, Belgium, EU, Spain, Korea, Germany, Italy, and Ireland.
All donors states should follow Norway in insisting that UN Women establish “satisfactory procedures” to ensure that “nothing of this nature happens again,’ in the words of Norwegian foreign minister Børge Brende. See full Norwegian statement below.
Norway said its funding was “to promote the participation of women in elections.” It was not clear which Palestinian elections, however, as Mahmoud Abbas is now in the 12th year of his 4-year term, which was supposed to end on January 9, 2009. “Many Palestinians have never voted in presidential or parliamentary elections because Mr. Abbas has failed to hold them, even though they are called for in the Basic Law governing the Palestinian Authority,” wrote Diana Buttu on Friday.

UN Women’s Palestinian section appears to engage in a variety of programs that promote anti-Israel advocacy.
For 2017, it wants:

A Palestinian women’s centre in the village of Burqa on the West Bank has recently been named after Dalal Mughrabi. Dalal Mughrabi took part in a terrorist attack in Israel in 1978 that killed 37 civilians, including many children. The centre has received funding from Norway via the Palestinian Election Commission and UN Women to promote the participation of women in elections.

‘The glorification of terrorist attacks is completely unacceptable, and I deplore this decision in the strongest possible terms. Norway will not allow itself to be associated with institutions that take the names of terrorists in this way. We will not accept the use of Norwegian aid funding for such purposes,’ said Minister of Foreign Affairs Børge Brende.
It was not until after Norway had stopped providing funding for the centre that it became known that it was to be named after the Palestinian terrorist. This happened in connection with the opening of the centre last week. Neither the Norwegian authorities nor the UN were consulted in advance or invited to the opening ceremony. The Ministry of Foreign Affairs reacted immediately when it became aware of the matter today.
‘We have asked for the logo of the Norwegian representation office to be removed from the building immediately, and for the funding that has been allocated to the centre to be repaid. We will not enter into any new agreements with either the Palestinian Election Commission or UN Women in Palestinian areas until satisfactory procedures are in place to ensure that nothing of this nature happens again,’ said Mr Brende.