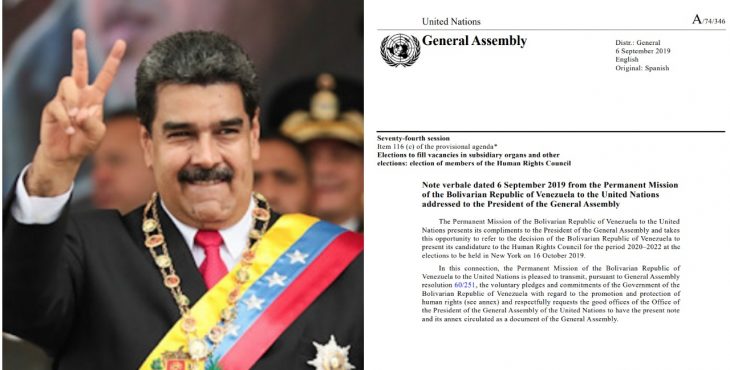 GENEVA, September 29, 2019 — It’s official: Venezuela has submitted its candidacy for a seat on the UN’s highest human rights body, and barring an unexpected shift, the Maduro regime — despite being accused of gross and systematic human rights abuses — will be elected by a vote in the UN general assembly on October 16th, according to UN Watch, a non-governmental human rights organization based in Geneva. (See Venezuela’s human rights pledges below.)
The voting will also confer council membership on at least three other countries – Libya, Mauritania, and Sudan – that independent human rights groups also judge to be unqualified by reason of their chronic human rights abuses and negative voting record on rights issues.
UN Watch warned the results could severely undermine the council’s credibility. “Electing Venezuela to a human rights council is like making a pyromaniac into the town fire chief,” said Hillel Neuer, executive director of the watchdog group.
The outcome of next month’s vote can be predicted in advance because the geographically organized regional slates to which Venezuela and the other countries belong have not nominated alternative candidates, so all four will be elected unopposed.
EU breaches pledge to fight for competitive elections
In 2017, the EU pledged to “strive to ensure competitive Human Rights Council membership elections, particularly by encouraging more candidates than seats within each regional group,” however UN Watch is unaware of any EU effort to encourage candidate countries from the Latin American group to challenge Venezuela, or to encourage African countries to submit candidacies to challenge Libya, Mauritania and Sudan.
Neuer said the creation of the council in 2006 by the late Kofi Annan, then UN secretary general, was intended to weed out the worst abusers, whose presence had discredited the council’s predecessor, the now-defunct UN human rights commission. “Sadly, this was never respected. This year, there is not even the illusion of competition,” Neuer said.
“When the UN itself appoints human rights violators to its top human rights body, it indulges the very culture of impunity it is supposed to combat. We are calling on EU member states such as France, Germany and the UK to lead the world’s democracies in protecting the council’s mandate, and not end up accomplices to its breach.”
Even Uncontested Candidates Must Win Majority of 97 Votes
Neuer noted that even candidates running on clean slates, with no competition, must still win a majority of 97 votes, and he is urging the 193-member general assembly to reject known rights abusers. “UN member states have the legal right — and moral obligation — to refrain from voting for unqualified candidates,” he said. Such appeals have been ignored in the past. In recent elections, China received 180 votes and Saudi Arabia 154.
Critics of the process fear Venezuela’s elevation will give undeserved respectability to the authoritarian regime of president Nicola Maduro, which has an exceptionally grim record of executions, enforced disappearances, torture, arbitrary arrest and detention, and draconian restrictions on civil rights and media freedom.
In a statement, Neuer expressed disappointment that EU countries were not doing more to support the council after the US withdrawal in 2018. “By turning a blind eye as human rights violators easily join and subvert the council, leading democracies will be complicit in the world body’s moral decline,” he said. “We need to hear the EU’s [foreign policy chief Federica Mogherini and EU member states lead the call to oppose the worst abusers. So far, they have been silent.”
Venezuela issues 7-page human rights pledge
UN Watch was the first to report Venezuela’s candidacy earlier this month, launching a protest campaign that went viral.
The regime’s candidacy was formally confirmed by the UN’s recent publication of papers, filed by Venezuela on September 6th, in which the Maduro government claims that it has been “implementing policies to achieve social, economic and cultural equality” as well as “the exercise of civil and political rights.”
In reality, millions have fled the country in the past five years, with some 80% of the population having trouble finding food. The government stands accused of committing extrajudicial killings, arbitrary arrests and torture.

Candidature of the Bolivarian Republic of Venezuela to the Human Rights Council, 2020–2022

Voluntary pledges and commitments with regard to the promotion and
protection of human rights, pursuant to General Assembly resolution 60/251