Rami Aman, a Palestinian peace activist, recalled his ordeal of torture in prison by Hamas, during an interview on the roof of his family house in Gaza City, Feb. 10, 2021.

The Geneva-based human rights organization made its criticism in a major new report to the UN Committee Against Torture, which will meet next week for two days, on July 19-20, to consider Palestinian compliance with the UN convention against torture and other cruel forms of punishment. The UN panel published the submission on its website.

“Evidence continues to emerge of widespread torture and other cruel, inhuman or degrading treatment of detainees held in Palestinian custody in the West Bank and Gaza,” said Hillel Neuer, executive director of UN Watch.

UN Watch representatives will present the report to the 10-member committee during a private briefing with human rights groups on July 18, one day before the experts are set to grill a delegation from the Palestinian Authority for the first time since it signed the treaty in 2014. 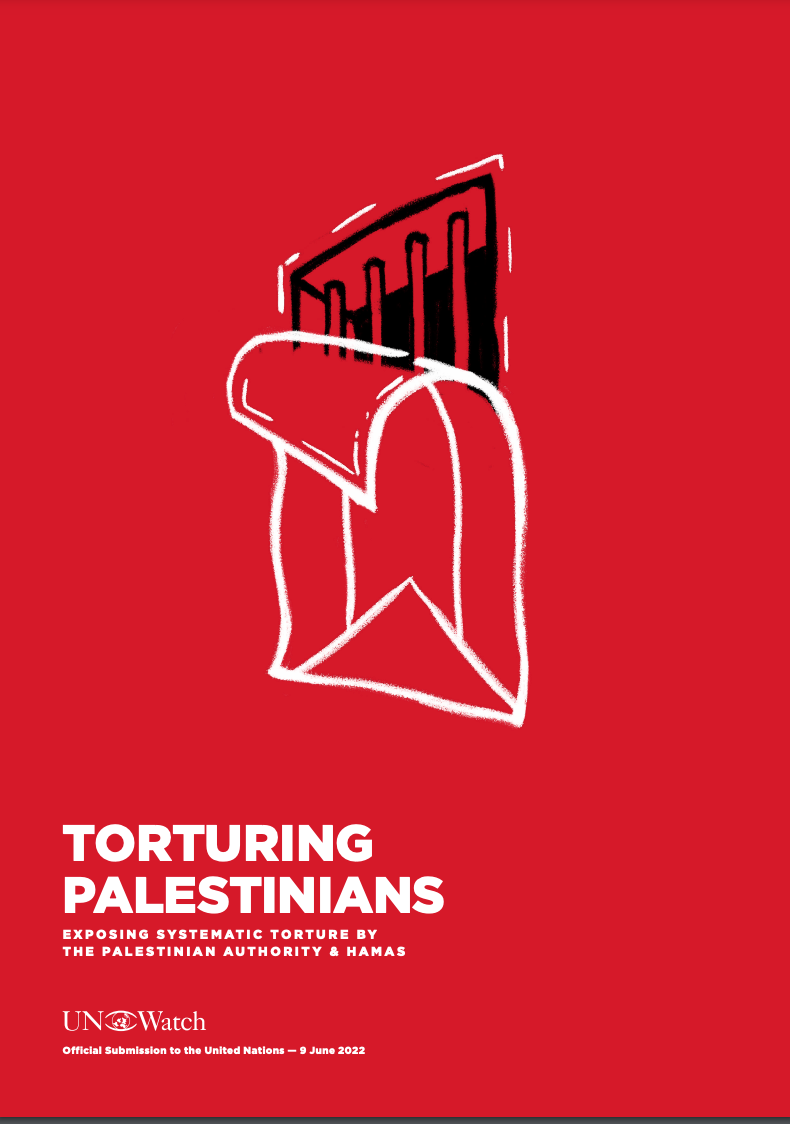 While the PA is expected to tout how it has fulfilled its promises, UN Watch said the PA’s 67-page response—submitted to the committee four years late—seeks to absolve Palestinian actors of responsibility for complying with the treaty’s prohibitions against torture, and instead points the finger at Israel to deflect attention from the PA’s own record, the actual subject of the UN review.

According to UN Watch legal advisor Dina Rovner, the Palestinian submission “contains no data on the pervasiveness of torture under the PA and Hamas, or on any practical measures implemented to prevent torture by security forces during interrogation, nor does it offer any information on individual cases of torture, justice for victims, or actions to address underlying causes of violations.”

According to UN Watch’s report, LGBTQ persons living under the Palestinian Authority and Hamas control suffer “severe persecution and ostracism.”

Gay Palestinians who managed to escape recount harrowing torture by PA and Hamas forces, including often successful attempts to coerce them to inform on others, forced marriages, and death threats.

“They arrested me, hanged me from the ceiling, beat me up and interrogated me for five days,” said a gay Gaza Palestinian now living in exile in Turkey.

“Everyone is afraid of everyone. Some have been punished, some have been killed. Others killed themselves,” said another gay man from Gaza.

In May 2021, PA security forces arrested dozens of activists and students considered critical of the PA. Taken to an infamous Jericho prison known as the “slaughterhouse,” they were accused of “stirring up sectarian and racial strife” and subjected to torture.

The June 24, 2021 death in PA custody of PA critic Nizar Banat sparked a wave of protests in the West Bank. The PA police responded by arresting and beating the protesters, along with journalists, civil society activists and lawyers.

“Never in my life have I seen such brutality. The sounds of people screaming inside the police station, to this day I still hear it,” said Palestinian radio journalist Akil Awadah, who was beaten and detained on July 5, 2021 with several other protesters.

Hamas in Gaza also routinely employs torture. Gaza peace activist Rami Aman, who was held by Hamas for more than six months in 2020, spoke publicly about being tortured by Hamas.

In March 2019, Hamas security forces severely beat protesters with batons and clubs and arrested more than 1,000, including journalists and human rights defenders.  Many were subjected to torture.

Palestinians accused of “collaborating” with Israel are routinely tortured by both the PA and Hamas.

Torture included beatings, putting out cigarettes on their bodies, pulling out teeth, forcing them into painful positions and abusing their genitals.

In June 2018, an Israeli court ordered the PA to pay $3.5 million in compensation to 51 victims and family members of Palestinians who were arrested and tortured by the PA between 1990 and 2003 for assisting Israeli security forces to prevent terror attacks.

Yet the practice continues. In March 2022, Palestinian-American Suha Jbara testified that PA agents tortured her in late 2018 for “collaboration” with Israel.

“The interrogator also threatened me with rape and started beating me. He said he knows how to beat me without leaving signs on my body. The interrogation and beating lasted all night,” she said.

Hamas in Gaza is also known for torturing and executing suspected “collaborators.”

Torture of Palestinians Who Sell Land to Jews

Palestinians who sell land to Jews are routinely tortured and killed. In December 2018, American-Palestinian Isaam Akel was sentenced to life in prison with hard labor for violating the Palestinian law prohibiting land sales to Israelis. Both Akel’s wife and a U.S. official who visited Akel in prison confirmed that he had been put in isolation and tortured.

Akel’s case is one example of how the Palestinian Authority has failed to live up to its obligations to comply with an international convention against torture, as documented by UN Watch’s report.

“We trust that our collection of evidence and harrowing testimonies will assist the UN committee experts next week when they review whether the PA has followed through on its promises to eradicate the use of torture.”

Neuer called on the Palestinian representative to the UN in Geneva, Ibrahim Khraishi, to be open about the PA’s routine use of torture at the upcoming review.