GENEVA, September 21, 2018 — Russian justice minister Alexander Konovalov was confronted in a UN debate today by one of his country’s most prominent dissidents. Pro-democracy activist, author and filmmaker Vladimir Kara-Murza, who was twice poisoned and nearly killed in Moscow, refuted the Kremlin’s assertions as he took the floor at the invitation of the Swiss-based human rights group UN Watch.
Konovalov presented his country’s record before a mandatory quadrennial review by the 47-nation UN Human Rights Council, saying that the Putin government “was committed to protect civil society actors,” as well as minorities and women. On Crimea, he denied Russia’s illegal annexation, saying “the people of Crimea had freely decided to join the Russian Federation.” (Full summary here.)
Kara-Murza rejected the justice minister’s claims, saying that in Russia unwelcome NGOs are designated as “foreign agents”; the right to free elections “has become a sham”; and that peaceful demonstrators “are detained and beaten up – not only with police batons, but also with Cossack whips.” Russia’s law enforcement system, he said, “has turned into an instrument of repression.”

“I am grateful to UN Watch for the opportunity to speak before the United Nations Human Rights Council on behalf of Russian civil society,” said Kara-Murza.

“It is important that the Council hears the truth about what is happening in our country, not just the propaganda presentation prepared by the Kremlin’s envoys.”

Earlier this year, Kara-Murza was the 2018 recipient of the Courage Award presented by the Geneva Summit for Human Rights and Democracy, organized by UN Watch and more than 20 other human rights organizations from around the globe.

Russian justice minister confronted by dissident @vkaramurza in UN rights debate, speaking on behalf of UN Watch. "Peaceful demonstrators are detained and beaten up – not only with police batons, but also with Cossack whips." https://t.co/LvRrKrCwOW via @unwatch

Thank you, Mr. President. My name is Vladimir Kara-Murza, I am vice chairman of Open Russia, and I am grateful for the opportunity to address the Council on behalf of United Nations Watch.

In their presentation to the Working Group and in the remarks by the minister of justice the Russian authorities have painted an idyllic picture. They talk about the precedence of international law, strengthening the independence of the judiciary, support for non-governmental organizations, and even – I quote from the text – “implementing democratic reforms.”
To me as a Russian citizen this reads like science fiction.
The situation in our country is very different from the one you are being presented. Russian citizens are denied the basic rights and freedoms guaranteed by the Universal Declaration of Human Rights and the International Covenant on Civil and Political Rights.
The right to free elections has become a sham – and not only because of administrative pressure and fraud, although these also exist. In most cases, genuine opposition is not even allowed on the ballot. Unwelcome NGOs are designated as “foreign agents” and “undesirable organizations”.
The main media outlets are under strict government control. Peaceful demonstrators are detained and beaten up – not only with police batons, but also with Cossack whips.
The law enforcement system has turned into an instrument of repression. According to the Memorial Human Rights Centre, there are currently 192 political and religious prisoners in Russia.
But this is not the worst of it. Opponents of the government increasingly face the threat of physical violence. Attacks, injuries, poisonings – this is only a partial list. In February 2015 Russian opposition leader Boris Nemtsov was shot dead 200 metres from the Kremlin. The organizers and masterminds of this crime have not been brought to justice.
The actions of the current regime violate both the Russian Constitution and the international agreements signed by our country. We hope that the UN Human Rights Council will not take the Kremlin’s propaganda statements at face value. 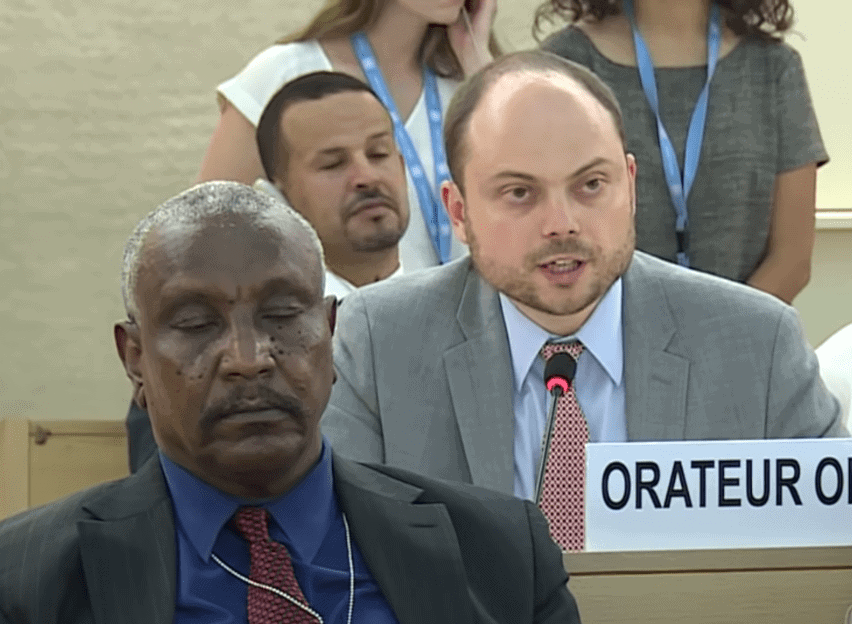